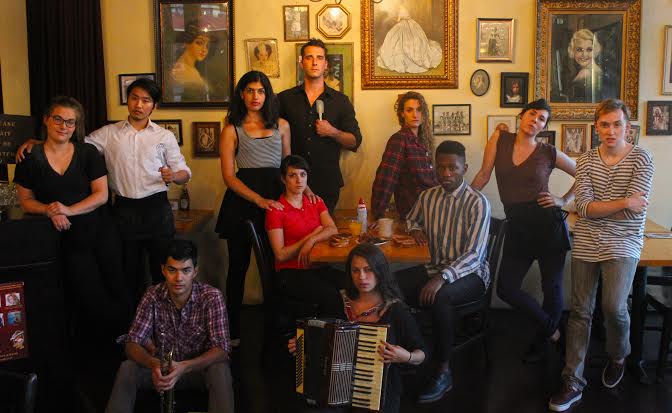 The Horse in Motion — a theater company named after the Eadweard Muybridge experiments that eventually led to the creation of the motion picture camera — first launched itself onto the Seattle consciousness with 2014’s Attempts on Her Life, a sprawling play that sent its audience all over the U-District’s University Heights Center for its production. The play utilized multiple rooms on different levels of the building in order to create a layered, non-linear and impressionistic pastiche of its central character, a troubled youth that acquired an amount of notoriety. The production was tremendously ambitious, especially for a new company, and was a little uneven in its execution, save for two things: 1)The best use of its lead, Meaghan Mary Halverson, in any production before or since. 2) The unmistakable impression that Attempts was only the beginning for this company. In a theatrical landscape seemingly set on offering little beyond traditional, homogenized realism from the usual sources (with a few notable exceptions), a company not only based on the principle of “using the traditional tools of theatre in new and innovative ways to change the way [the audience] view[s] the world” [taken from THIM’s press release], but then also goes out to do just that is a welcome entity.

A year later, after a number of smaller projects, THIM returns with BrechtFest, which promises to combine three of the renown German playwright’s works (Baal, The Good Person of Szechwan, and The Threepenny Opera), with the company’s thematic predilections and a three course breakfast. Once again, not a small undertaking. The Star sat down with BrechtFest‘s director, Bobbin Ramsey, and talked about the company’s motivation behind the project; how Brecht is often treated poorly by modern productions; and why it was important that the plays be seen as part of the first meal of the day.–ja

Seattle Star: Your group, The Horse in Motion, is a product of the University of Washington, right?

Seattle Star: Are you guys from the PATP program?

Bobbin Ramsey: We are not, actually. We all are UW undergrad alums. All of our core ensemble members graduated from the UW undergraduate program between 2012 and 2014.

Seattle Star: What drew you guys together?

Bobbin Ramsey: Well, we are definitely dedicated to the non-traditional. Mary Hubert, another founding member, brought me the script for Martin Crimp’s Attempts on Her Life back in May 2013 and said ‘I want to do this play, and I want you to direct it.’ Since Crimp’s script is very unique and un-traditional, we pulled together some of our peers and collaborators to work with us who were interested in a long development process, and exploring the devising and generating of new material. It ended up being about 8 months.

When we were finally producing the play we thought to ourselves, “I guess some organization needs to be formed,” and we created THIM. After Attempts, we decided to move forward as a group to continue to create site-specific, immersive, and unique theater experiences.

Seattle Star: So, why Brecht and why this timing? Why this concept for breakfast?

Bobbin Ramsey: Well, to be honest, it started out as a pun we just loved. One day while talking about Beckett Fest back in 2013 – 2014, one the our collaborators accidentally said “BrechtFest”, and we realized the possibility of how much potential that pun could hold. But, we wanted to make sure it had legs before we jumped in, and asked those three questions you posed above to ourselves.

Seattle Star: What did you come up with?

Bobbin Ramsey: We began by researching Brecht and giving ourselves a greater understanding about him as an artist than the stuffy German we had learned about in our theater history classes. What we found, very quickly, was that he was not stuffy at all, and that his writings were quite applicable to us as an ensemble, and to the issues that our group is interested in tackling with our art.

The Mission Statement for The Horse in Motion is “To engage our audience in new experiences that expand the traditional conception of theater and reshape the way we interact with art, our community, and the world.” In our research and brainstorming sessions, we concluded that Brecht had a similar mission in his writing. He was absolutely trying to reshape theater and offer audiences a new experience and actively get them to engage with the world. In this way, he was a man after our own hearts. So we determined that Brecht was absolutely the right playwright for us to tackle.

The issues of racial injustice in this country, issues of consent and sexual identity. Bail outs and the lack of opportunities for college grads and lack of arts funding. All of these issues only bring more weight to Brecht’s text. After all of us having seen Brecht plays that had a lack action behind them, productions that felt like classics and not plays addressing the central issues of the time, we realized we wanted to tackle Brecht and revitalize the spirit of his work.

Seattle Star: And why breakfast theater?

Bobbin Ramsey: Because none of us have ever been to breakfast theater before, and we are dedicated to offering our audiences new experiences. And if, in the spirit of Brecht, we are inviting and inciting our audience to take action, then when they leave the theater they have to ask themselves “what am I going to do with the rest of my day?”

There’s no way to just go home, go to bed. You have the impetus to think and act upon the questions we’ve raised.

Seattle Star: Was the decision to meld three plays together made in order to bend his text to your will?

Bobbin Ramsey: Not so much to bend the text to our will, but to make sure we had the opportunity to say everything we wanted to. Doing just Threepenny or just Good Person didn’t quite encapsulate the intensity and girth of the issues in our society that we want to tackle. Plus, if it’s “BrechtFest,” then we wanted it to be a festival of Brecht!

Once we had decided on the three plays we wanted to mash together, we spent time understanding each of them in their own regard, and then what it meant for our production as a whole. The overarching message of pretty much ALL of Brecht plays is that it is impossible to survive and have morals — especially in regards to capitalism, Brecht has a phase as a staunch Marxist.

Looking at that through a more modern lens, we decided to have our dramatic statement be ‘The Game is Rigged.’ As all of us in the ensemble have felt that the game was rigged in certain areas of our lives, we embarked on this production with that fundamental problem in mind. Then, we analyzed how each of the plays and each of our three protagonists deal with the fact that the game is never tipped in their favor, by playing, by bending the rules, by breaking the rules and by rejecting the game all together.

Seattle Star: Those are fairly thick texts you’re playing around with…

Bobbin Ramsey: We did have to cut them down quite a bit, and you get a three course breakfast! [Laughter.] We tried our best to preserve the essence and most important moments of activism. We spent about 4 months developing the script so that we could try to find the perfect cross-section of the plays.

Seattle Star: Are you guys keeping the Kurt Weill stuff in place?

Bobbin Ramsey: Mostly, yes. We have a total 10 songs in the production, using his original music, with just a bit of jazzy twist on it.

Seattle Star: Whose idea was that?

Bobbin Ramsey: Well, in our creating of the piece, one of our greatest concerns was that the audience was going to get lost in all the characters and stories going on. So Shaudi Vahdat, fellow THIM member and our music director, devised the idea that each play would have its own musical vocabulary. Threepenny Opera is mid-century Jazz, Baal is Grunge and Good Person is Modern Folk.

Many of the design choices were also determined by these musical styles. That way the lighting, costuming and sound/music design, help the audience to keep track. Not by any means do we think they will need their hand held. There is just A LOT going on throughout the show.

Seattle Star: Who are your musicians?

Bobbin Ramsey: Shaudi is a singer/songwriter in the local scene and she pulled together our band. Local actor/musicians Joey Shaw and Jonathan Shue are in the band. And our other two band members, Jon Graber and Rollie Williams, are musicians she had previously collaborated with or recommended to her.

Seattle Star: How is it working out?

Bobbin Ramsey: So far I think it’s working pretty well! It will be interesting to hear them all together. We haven’t gotten to that point yet…

Bobbin Ramsey: Yes, which will be quite an adventure! We’re using the Can Can, which is a fantastic space, but since they have their own shows during the week we have a pretty limited amount of time in the space before we open.

The pains of using nontraditional theater venues is something I know very well. Doesn’t make every process any easier, though!

Seattle Star: Why the Can Can, what drew you guys there?

Bobbin Ramsey: Well, it’s a pretty incredible space. It’s underground and we really like the vibe it gave. Sort of similar to an old cabaret space — something that would’ve been reminiscent of Brecht’s first productions. It is a nice cross-section between a theater and a restaurant, and they were willing to work with us!

Plus, they were very excited about the project we were doing. A lot of restaurants that we talked to were a little nervous about having a production in their space on Saturday and Sunday mornings; the Can Can welcomed us with open arms.

Seattle Star: Well, before you go, any quick words about the breakfast?

Bobbin Ramsey: Yes! We have some delicious food being prepared. The chef from the Can Can is preparing the meals for us and he is incredible! We’re starting with a locally sourced fruit salad. Then, there is a frittata that will change weekly based on what variety of vegetables we pick up. And we finish off with bread pudding!

It should be very tasty!