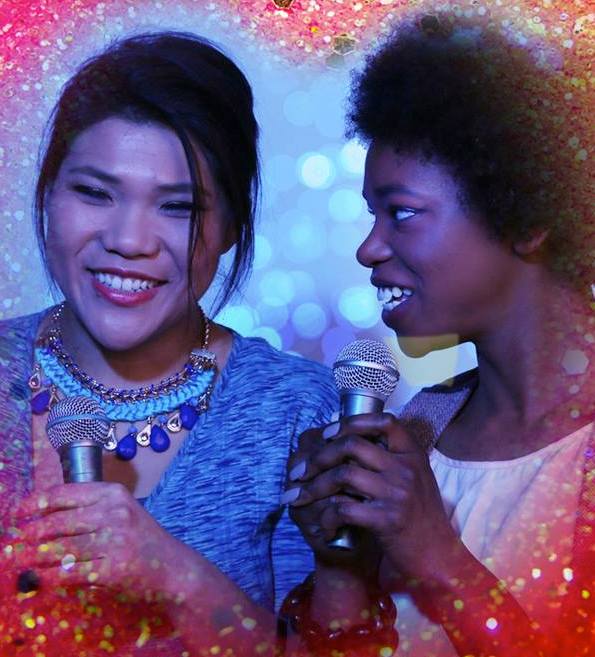 In Seth Tankus’ new play, Eat Cake, Ariel and Addison are throwing their dream wedding, a DIY extravaganza, but the clock is ticking and everything is a disaster. The guests won’t stop screaming at each other or running into backrooms to make out, the cake is a catastrophe of colossal proportions, and an un-invited guest shows up stoned. Making matters more complex, it is uncertain whether the betrothed couple are really sincere about gay marriage or just doing it out of a sense of obligation. The play opens at Annex Theatre this coming Tuesday.

Seth Tankus is a transfeminine playwright whose works are primarily interested in the intersections of feminism, queer/transgender identity, catharsis using Epic (a.k.a. presentational) theatrical aesthetics. Tankus is an alumnus of the Lambda Literary Emerging Writers’ Retreat, member of the Parley Playwright’s Group and is the co-artistic director of RiOT Productions. Their plays have been produced all over Seattle, including Gay City Arts, Pocket Theater, West of Lenin and in association with MAP Theatre, and Portland OR’s Fuse Theatre Ensemble.

Catherine Blake Smith is an Artistic Associate at Annex Theatre, where she also serves as the curator for the company’s long running Late Night Cabaret, Spin the Bottle. She has also directed numerous productions about town, including plays found in Annex’s Zig Zag Festival, Star Crossed, and other tales from a devious universe and Tinfoil/Cardboard Production’s Operation Hibernation in the 2013 Seattle Fringe Festival.

Julie Hoang is also a playwright in the Parley Playwright’s Group, and is portraying the role of Addison in the production.

The Star conducted this interview over a handful of afternoons just as the cast was heading into the final phase of rehearsals. The discussion centered around Eat Cake‘s themes, how those played out over various drafts, and the chaotic nature of general relationships around the vortex that is a wedding.

Seattle Star: Seth, tell me about your first impetus for this piece.

Seth Tankus: My first impetus…I wanted to write a play about my Mom’s divorce from my dad, but then I watched Muriel’s Wedding and experienced a lot of romantic and chosen family loss really quickly…All these things made their way into the play.

Seattle Star: Were you trying to fill a void in the theatrical landscape? Have there been any similarly themed farces since The Ritz or La Cage aux Folles?

ST: I often see gay themed farces/family dramas/romantic comedies, but I don’t see them through the lens Eat Cake views them through. Eat Cake is the first play about gay marriage that’s been produced in Seattle since the decision last year.

ST: In Seattle. I’m sure there’s been things done elsewhere. The only other play I could potentially think of is Wizzer Pizzer, but that was written before the decision. Around 2012 or so.

Seattle Star: Not really about marriage, though…at least that wasn’t what stuck out to me.

Seattle Star: Catherine, what initially drew you to this production?

Catherine Blake Smith: The opportunity to work with Seth, and the themes in the play.

Seattle Star: Those themes being?

Seattle Star: Those are fairly universal themes, what makes this different than something like…Undo, for example?

CBS: Eat Cake is very big. There are a lot of moving parts, a lot of distinct and diverse characters.

The family itself, in this play, is very disparate — one might say dysfunctional in the past — plus there are several other characters involved in the play who are only remotely related to the event bringing them all together or the actual events in the play. It’s those big themes that help me think of the play as whole, in my mind.

That said, in the first meeting I had with Seth, the play was very different. The play was distinctly about motherhood, a wedding, and love. So what pulls me to it now are still those themes I first mentioned, which yes, are big themes, but it’s a big play. There is a lot to say.

We’ve spent the last two months doing table work, talking about character arcs, how they intersect, because there is so much to talk about in those themes — Oh! and feminism. It’s a very feminist play. But that’s more an underlying current or support of the play that draws me to it. It’s not an aspect I consciously think about, when I think about the play. But it’s there.

Seattle Star: How about you, Julie? What drew you to this production at first?

Julie Hoang: Seth and I are in the same playwriting group, so that’s how I got to know their work and I think they are super talented and funny and poignant.

Seattle Star: Give me an example of their work making an impact with you.

JH: I read their first scene they submitted and I remembered how distinct the voice was. I’ve never read or seen anything like that in theatre. It was refreshing.

Seattle Star: Was it an exchange or…

JH: It was dialogue for sure. Definitely sharp, and made me think “Oh that’s totally up my alley.” These characters say the most extreme things and they feel so far out there, and then you’re like “Wait — I do that…”

There used to be this scene in the play where the characters have a bit of Brechtian fun. They all shout what seems to be their ego is saying. The rhythm is fantastic and then it falls on one character, right in the middle of the crazy argument, saying “I’m going to play with my napkin as a means of avoiding conflict.”

CBS: But that scene is still kind of there!

CBS: I love how whenever I see a scene go away, it’s reborn in a new and beautiful way. And I mourn the scene that’s gone, yet I’m excited to develop the new scene that’s come in its place, especially because with every re-write, the play is stronger.

Seattle Star: How far back does that strengthening go? Was there a change, regardless how subtle, that took place in the material after you guys met?

CBS: Do you mean the script after my first meeting with Seth?

CBS: Then yes, drastic. As Seth continued to develop the play in Parley there were a lot of changes that took place, including the names of the characters.

Seattle Star: Drastic how? Was it not a farce anymore?

CBS: It didn’t start out as a farce. It began as a first act, with a lot of focus on the Mother and her story, told through monologues.

As we talked about the themes that came out of the first draft, Seth and I realized the play could say so much more, and the version we saw last August with Parley came out of that. After casting for the Annex production, the play changed again, and the characters became more defined. Eat Cake has been given a lot of dramaturgical work, which is awesome.

Seth, is this list right? Dramaturgy with me before our Annex pitch, then you took it to Lambda, and the Parley Writing Group, then the work was done through the read-throughs with the cast?

ST: Yup! That sounds about right. I didn’t work on it much at Lambda but I used the crafting tools I learned there to refine the story.

Seattle Star: Seth, fair to say that this level of attention — the retilling, the communication, the alterations — is or is not something you’re used to doing with your work?

ST: Yes, all of those are things I do often.

Seattle Star: Do you usually do that solo, or are you often collaborating with someone like Catherine?

ST: I try my best to collaborate with people. Multiple perspectives make the work better. I’ve been really fortunate to get feedback from the Parley group, which I’m in with Julie — who is also a brilliant playwright. For Eat Cake, I got feedback from them and a whole bushel of other people: Courtney Meaker, Seayoung Yim, Marquicia Dominguez…Oh, and Amontaine Aurore created her own monologue in the play, by the way. She plays Petra, the Mother character.

Seattle Star: Julie, could tell me about your character?

JH: Addison is an intense lover. She’s had previous relationships with both female and male identified people, but it’s not until she meets Ariel that she finally feels like herself. The two of them are soul mates and understand each other’s struggles and shame in this present time in our society (not being white, heterosexual, or cis-male). Addison has also left her Mormon family in search of a bigger, open place in the world.

Seattle Star: Oh wow. Had you all been familiar with the sort of complications that kind of separation implies for folks of the Mormon community?

JH: Not exactly familiar with the Mormon community in my actual life, but I do relate to the feeling of breaking out other communities I belonged to and experiencing the backlash it creates.

CBS: I am not familiar with it except very peripherally. It’s a part of the background that was added during table work. That we did talk about.

ST: I am very familiar. My mom is Mormon, as is most of her family still. My mom’s not queer, but she was excommunicated when she married my Dad, who is Romani and Jewish, and she and I talked a lot about that fall out.

Seattle Star: How does the fallout play into your themes?

I think the theme of what a person has to sacrifice in order to be in a family is definitely there. Sacrifice, or no sacrifice, or how to negotiate between chosen and blood family when we like to think it’s as easy as saying, “No, this person is out of my life or in my life for x-y-z reasons.” But it’s never that easy.

ST: I think those are all happening at once.

Seattle Star: To whom?

CBS: Each character does in their own way.

ST: Petra, for example, is being faced with the challenge of being attached to her kids but now finally has the time to be with herself, and is learning how to be selfish. Two other characters are more accidental because they only know one person at the wedding, and their whole relationship crumbles within the span of four hours. An estranged dad is trying to insert himself into a family that doesn’t want him. A pair of brothers are trying to connect when they couldn’t be more different, and so on…

Seattle Star: The word “farce” has been used a few times during this conversation, could you say what the farce’s target is? What is it commenting on or observing?

ST: I tend to leave those decisions to the audience and find them with the director.
Especially since this is a newer work.

CBS: We’re using the term “farce” to describe the play in the definition of absurd, although that’s not to say that Addison and Ariel’s wedding itself is absurd. That it most certainly is not.

But the rushed nature of the day, the gathering of unlikely characters, all of those elements make the style of the play absurd, not the play itself. I mean, the play is farcical in nature, it’s absurd. Actors are speaking directly to the audience, moving fluidly between locations and dream states, while time keeps marching forward to the inevitable end, which is the ceremony itself.

There is still a larger message about the play and its themes that I think is for the audience to determine.