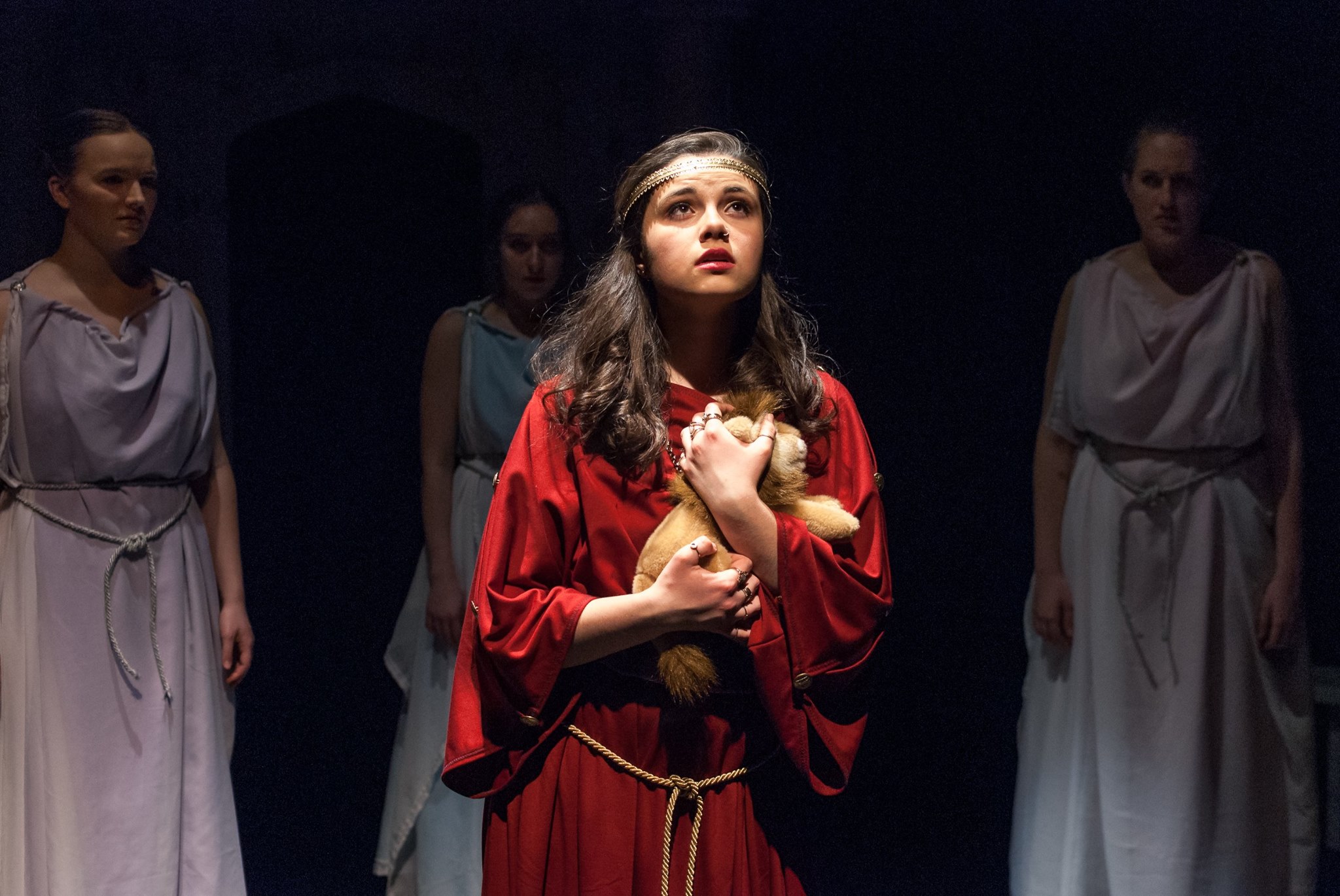 It’s always interesting to see how students approach the classics. Greek theater is, in so many ways, the diametrical opposite of contemporary America. Ancient Athens was a homogeneous culture with equally shared myth and mores. They held deep beliefs about the importance of art. Athenians considered it immoral for their citizens to shy away from controversy. It probably strikes most Americans as quaint, like an antique rocking chair. Yet almost everything currently rotten in American culture is present in Greek poetry. The macho posturing crap that is so infuriating in today’s society comes straight out of Homer’s Iliad. The axiom that woman=evil used to justify legalistic patriarchy comes straight out of Hesiod. Athenian democracy co-existed with Athenian slavery to maintain Athenian corruption and consumption in a manner similar to today’s globalism. Certain elements of the Euro-American culture that traces its roots to Ancient Greece may change but many remain the same.

On one level Euripides’ Medea is another one of those classical stories that hasn’t changed much. It remains a challenge to that culture of the hoi polloi now as then. The specifics are different — women now freely participate in democracy and are not legally considered as property — but the essence remains the same. If you are female, you have limited power in American patriarchy. If you are a barbarian, which is to say a foreigner, you have limited power in the nation-state of America. If you are both — well, then you are obviously a force of evil, come to tempt the purity of America with false ideals and miscegenation.

On another level, however, the story is quite foreign. Certain tropes in the play are quite alien, in the sense of the old phrase, “It’s all Greek to me.” The naturalness of slavery, for instance, would have struck an Athenian audience just as obviously as the assumption that all non-Greeks are barbarians — the very word comes from sheep sounds and just as easily means “babbler” as it does “not from our city.” There is in the word a precise kind of xenophobia. Also important is another related attitude: that the Greeks believed barbarians could never really become Greek. Barbarians could not marry Greek women, nor did they have any legal standing. They also had to pay taxes simply for being foreigners in Greece. Resident aliens, whom the Greeks called metoikoi, could only live in Greece if they were sponsored by a citizen, paid a yearly tax, and performed military service. As for the “woman problem,” there was serious debate about whether or not women were even the same species as men (cf. Aristotle’s On the Generation of Animals). Furthermore all of these things were due to Nature itself. Barbarians were inferior to Greeks by nature. Women were inferior to men by nature. Slaves were destined to be slaves by nature. No matter how bad contemporary America is, it is nowhere near this level.

These unspoken ideas do not merely provide context for Medea; they drive the action. How well one understands this foreignness in the script lifts a production or sinks it.

All these thoughts went through my mind watching the UW Undergraduate Theater Society’s production. Director Chris Mowers seems to understand the basic level of the script quite well. That’s a pretty good start. He also understands that classical theater is more than anything about keeping things simple and direct. His staging is clean and basic, yet natural. His approach stays out of the way of what makes Greek theater so appealing after all these centuries: the script and the acting.

Certain layers of the script remain inaccessible because the cast are simply too young and charming. For instance, one of the things that drives Jason away from Medea is that she is middle-aged and has lost her beauty. The casting of Jordan Kerslake as Medea, however, works against this. She is a truly lovely young lady with a face made for cinematic flourishes, and about as far from a middle-aged hag as it gets. Fortunately she is also a graceful, intelligent actor who has a clear idea of her character. Medea is about a woman who has lost everything, and Ms. Kerslake plays this much very well. But the depth of the everything is not completely revealed. For the play is also about a woman who never really had anything.

Some of what is lacking lies in the acting. Ms. Kerslake plays the essential angst of Medea quite well. I should like to see a little more modulation from her: between despair and determination, between effusive vengeance and slow burning guile. Some of what lacks, too, is in the direction. I should like to see Mr. Mowers emphasize more the theme of citizenship and the structure of society. I’d like it to be clearer that this is a fundamentally social play with a social underpinning; namely, that as a foreigner Medea has no rights, by law, and that the presence of the slave and chorus on stage neatly situates Medea’s struggle between those two strata of society. Medea is unable to be a real woman because she is a barbarian, and is only slightly better off than a slave. The theme is present on stage, but I wish it were stronger, more obvious.

Having said that, even with its limitations it remains a rather fine production. There are many brilliant touches in the piece. I am very fond of the See No Evil/Hear No Evil/Speak No Evil chorus of Ariaga Mucek, Anais Galpois and Annika Knapp. Gabi Boettner impresses me with her easy, conversational command of the language. This is no mean feat, for actors twice her age have shown less control than she does. Her interplay with Ms. Kerslake made me wish the play had more of them talking to each other. Peter Feodorchuk’s performance as Jason too has its limitations, like much of the production, but is a fine turn and shows him to be quite promising. And it’s always nice to see Elex Hill and Hannah Probst doing pretty much anything.

On the technical side I found Emma Halliday’s sound design to be excellent and subtle. Her pastiche of modern electronics and human-derived sounds like the heartbeats that recur at moments of decision give the production a kind of ambience that pushes it toward timelessness, making it modern but with ancient echoes. I enjoyed that effect greatly. The costumes are quite lovely in this regard as well, distinct in their simplicity, with a subtle color palette — except for Medea’s scarlet robes, which makes her stand out even more and is, I think, an excellent choice.

In our currently broken society, divided by special interests and factionalism, I expect we Americans are not ready for the optimism of Aeschylus or even the strong pessimism of Sophocles. This is a time for the poetic skepticism of Euripides. And who better to question all the received wisdom of the world than the youth who have to go out into it and find it lacking in sense and order? The UW UTS production of Medea hints at what can be said. I expect they, and others, will go even farther in the near future.