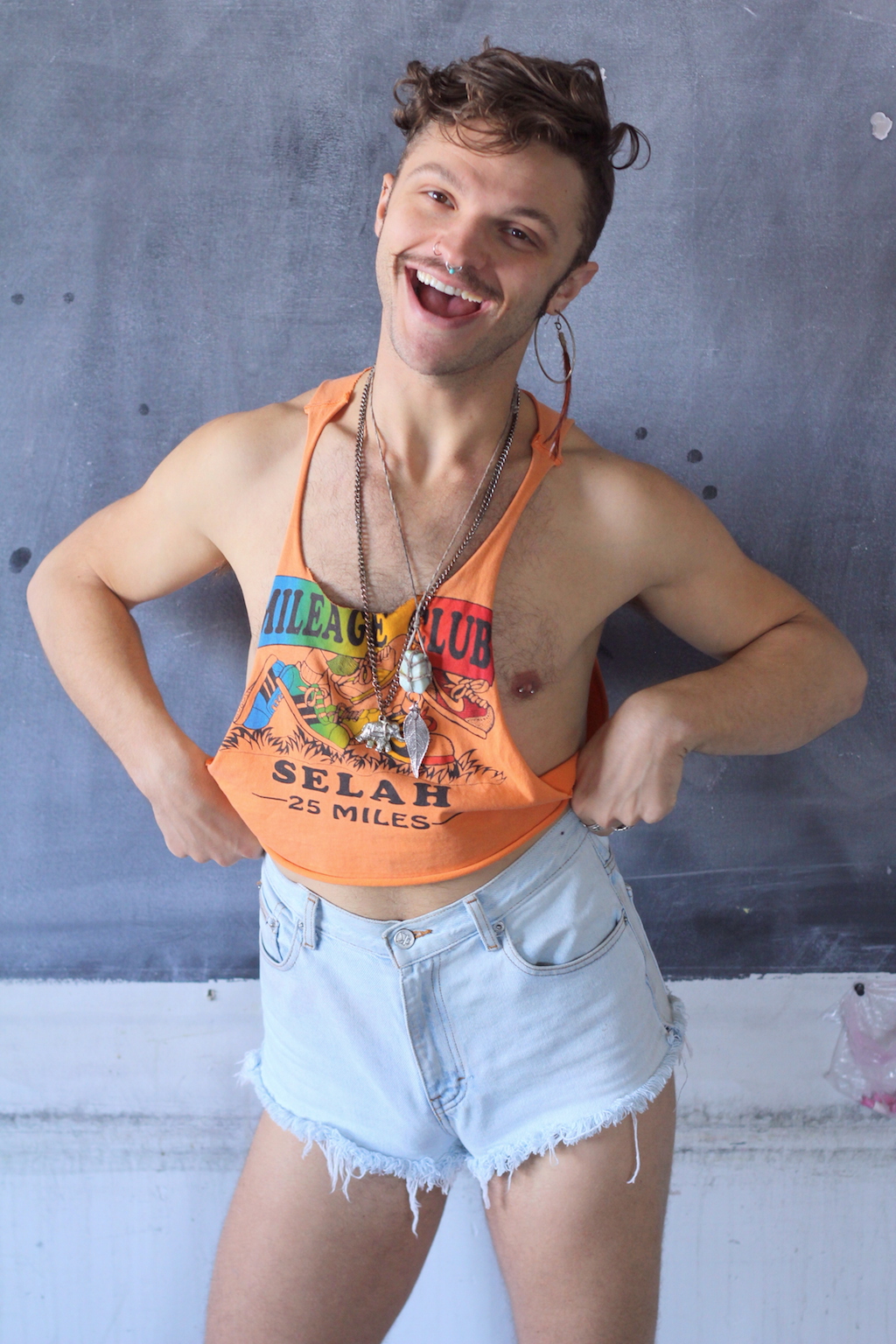 After a couple weeks of missed connections and force majeure, I’ve finally booked my appointment with Noah Duffy to talk about his new piece at 18th & Union, Schlong Song. I’m there early for a change. I settle in to collect my thoughts and my questions.

It’s unusual to see Mr. Duffy outside of his troupe, The Libertinis, and his usual nom de guerre as Woody Shticks. Initially I think of asking him how different his solo show is from the work he does with The Libertinis. But I find I’m not really interested in the answer. I’d rather let the show stand on its own. Besides, there are so many other things to talk about.

Mr. Duffy walks in, looking fresh off his bicycle ride, and greets me. After a round of apologies we sit down. I ask him how things have changed since he debuted the piece in its other form at the festival.

“It’s different, but it’s the same show,” he replies. “Marching through my own personal history has been really amazing.”

It’s perhaps not the response one expects. The situations in Schlong Song sound so completely outrageous that it’s hard to believe they’re actually true.

Mr. Duffy assures me that he could tell me even more. It’s his goal to go for the outlandish and ridiculous, something that he’s learned through his forays into stand-up comedy.

Schlong Song isn’t stand-up, but it isn’t improv either. Nor is it a Moth-style storytelling night. It’s a combination of all these into a mélange that doesn’t need a label. It’s theater, rough and ready–the same Rough Theater Peter Brook talks about as theater’s savior. Mr. Duffy calls it “a directed conversation.” But make no mistake: this is comedy.

It seems a strange direction to take for a man who trained in classical ballet and Elizabethan theater. He doesn’t see it that way. He reminds me that he’s also been a male stripper.

Certainly that experience comes in handy in handling the costume changes which, in Schlong Song, are all on stage in full view of the audience. The piece is designed around Mr. Duffy’s penchant for theatricality in a city where producers rarely treat such qualities with the respect they deserve. Despite the local appreciation of both burlesque and boylesque, theater companies and self-appointed gurus are loath to admit that they qualify as theater.

“Yeah, I don’t know where that comes from,” says Mr. Duffy. “What I do — this piece, Schlong Song — it’s really stand-up. There’s a lot of theatricality, but it’s fundamentally stand-up, mixed with my experience as a stripper. But if I call it that, people don’t know what to do. I mean, to qualify as theater to them — you know how it is. It takes 500 sound cues and a full crew, otherwise you’ve got nothing to say.”

I nod. I’ve had that discussion with several blowhards around town. It’s wearisome. While to me it’s a simple unpleasantness, performers like Mr. Duffy have to deal with it as a practical reality and respond to it.

Replace “men” with “heterosexual men” and you have the impetus of Schlong Song.

“I’m not a comedian who includes sex jokes,” says Mr. Duffy, “I’m a sex comedian.” I understand. “How do I look at ten, fifteen years of sexual experience and make sense of it? That’s the thing.”

Sex is the subject, not the decoration in Mr. Duffy’s work. The goal is not just to make cheap jokes that straight people can laugh at. It’s to make them uncomfortable. It’s an opening to talk about sex, but more than that to talk about how sexuality has been used to engender prejudice and oppression.

Because he plays the clown so well, it’s easy to overlook Mr. Duffy’s deep intellect. Everything he writes has a purpose, even in a seemingly glib work like Schlong Song — in fact, especially here.

When we begin talking about politics and gender, he lets me know in no uncertain terms that, while he calls his show a discussion, it’s also a speech in the Greek sense.

“This show is like filling in the blind spots in my own life,” he says. “In your life you’re always oppressing someone unintentionally–or intentionally.

“In this show I’m aiming directly at straight people, and how their oppression has created this world. They’re on the spot. I mean, they come in and they’re part of this, yes. They’re taken care of, but they’re also on the spot.”

The piece is confrontational but it isn’t a harangue. Mr. Duffy’s real tactic is to be outrageous so he can also be subtle. He smiles when I mention this. “Yes,” he says. “Subliminal, or almost subliminal. I want something that sticks with the audience and they’re thinking about it later and they don’t even remember where it came from.”

It’s been great to sit with a thoughtful artist and simply talk. By the end we’ve talked for about two hours, about gender politics, history, revolutions, improvisation, classical theater, poetry, camp, semiotics, psychic armor, and whatever else has come to mind. I can’t use it all for a simple preview, of course, but it’s all very exciting. It’s often easy to forget comedy is a serious business, but not today. I’m clearly in the presence of a serious artist — serious, but not solemn. We say our goodbyes and promise to see each other at the show.

I can hardly wait.