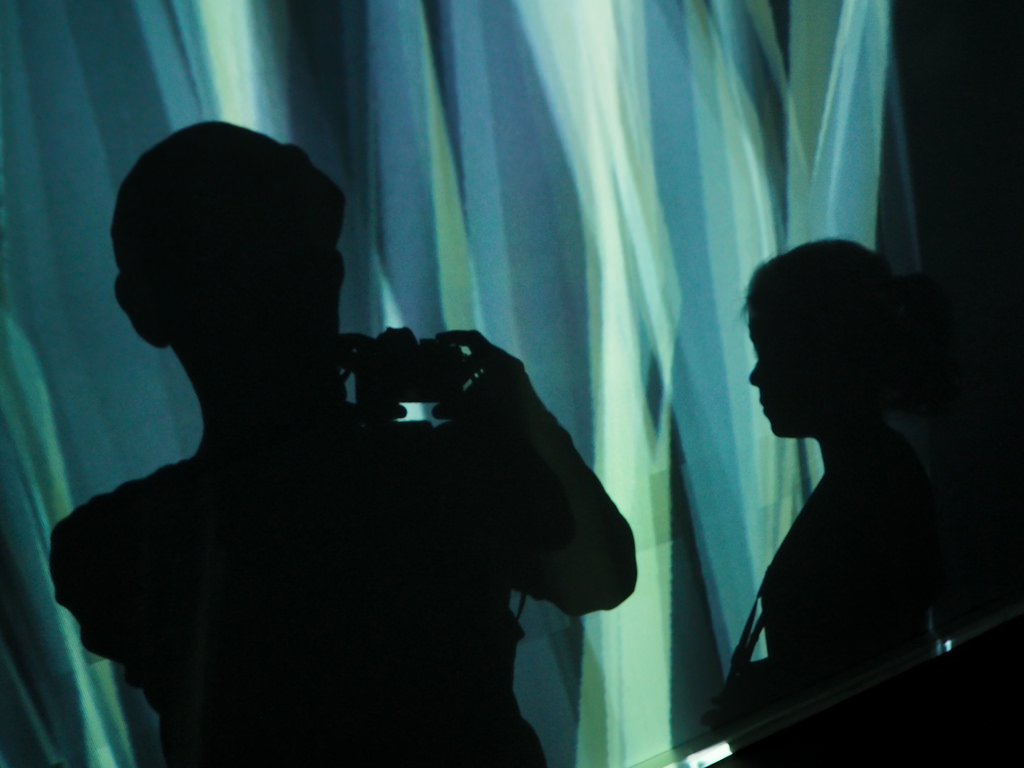 One of the inescapable truths of monocular photography (i.e. one camera, one lens) is that it creates images that are flat. Because the camera has one eye, it cannot recreate depth perception. Instead, planes compress into each other, distinguished from each other only by the artistic conventions of perspective and similar graphic devices. This compression, together with the distortion caused by lenses themselves, forms the basis of “photographic vision” or as some people call it “seeing like a camera.”

Painters and printers dealt with certain aspects of this photographic vision — a photograph is, after all, a print before it is anything else — on the level of the flat picture plane. The graphical problems among woodcuts and photographs are similar in many ways. Yet the camera brought with it a completely new set of problems such as lens distortion, focus, and double exposure and then reframed, if you will, the old problems such as the frame edge, single point perspective, figure-ground flip and others. Of course these are only “problems” if one thinks of them as such. If one’s goal is to make photography a substitute for human vision these are intractable problems indeed. If one takes the contrary view, namely that these are not problems at all but ripe topics for inquiry, then they are the foundation of photographic art.

All of my favorite photographers spend the bulk of their careers trying to master this unique way in which a camera represents an image. Technicians, rarely satisfied with the state of photography, have generally spent their careers trying to improve upon it, so that pictures are more “true to life.” Usually this entails bringing photographic vision “closer to what the eye sees” by introducing color and improving gamma curves, etc. One of their greatest attempts to “overcome” the monocular quality of photographic vision was to introduce binocular vision into photography, in the form of the stereograph.

The three-dimensional effect created by seeing two pictures taken side by side through a suitable viewer called a “stereoscope” was known as early as 1838. The stereograph took off in England, however, after six million people flocked to the Crystal Palace to behold the first World’s Fair, and a particular souvenir — Lane’s Telescopic Views, a series of engraved stereoscopes — found its way into the hands of people of all classes. The three-dimensional views caught on like a wildfire and began a wave of stereoscopic excitement lasting until about the time of the Franco-Prussian War.

This stereoscopic card is likely from the second wave of stereoscopic views that lasted roughly from 1887 to the Great Depression. The ink stamps on the back are quite plain. There is no studio name, nor a photographer’s mark, nor a publisher’s serial number, leading me to think this comes from a time when such cards had ceased to be rare. The braided hairstyle and the open-shouldered dress suggest further that this was taken no earlier the late 1880s, but before the high necklines and pompadours of the Gibson Girl era. A more fashionable person than I might make a more accurate guess based on the cut and material of the dress.

I’ve restored this picture somewhat to give a realistic look at it. The original is much less clear. The photograph on the right has torn, and someone tried to tape it back together, as one can see from the tape marks in the right-hand border of the card. Also visible are the notches on the left and right borders where the stereoscope would hold the card for viewing. It isn’t visible from a 2D representation of the card, but the gray cardboard on which the stereo pictures lie is slightly curled. The rounded corners on the card, too, help date the stereograph somewhere between 1868 and 1892. My personal guess, all things considered: 1883-1892.

Also, the pictures here are both square. Other stereograph cards in my collection, as well as those visible in the Library of Congress collection for instance have a kind of proscenium-like arc at the top of the picture giving them a theatrical look.

I do not recognize the woman in the photograph. Since stereoscope cards were generally made to be sold to the public, I can assume she had some measure of fame and not merely because she has a kind of classical American beauty. She sits on a fairly plain chaise and the background behind her is painted, rather than three dimensional. I conclude this is likely taken in a studio and not her home, which further suggests that she is a public figure of some renown. Is she an author, a singer, an actress, a suffragette? Hard to say.

It’s difficult to get a real sense of what a stereoscopic card looks like unless one has a viewer, but it’s possible to get an approximation by looking at the two images cross-eyed. One can see thus that this portrait has an interesting kind of depth to it, neither really flat nor really three dimensional. To my eyes it’s more like a pop-up book: there’s distinctly an illusion of receding planes that creates “depth” but everything within each plane is quite flat. Your mileage may vary.

I grew up with GAF View-Masters so the effect is well-known to me. In my childhood a shift had begun away from the colorful, saturated landscapes made for mental tourists toward more commercial products like adaptations of Hanna-Barbera cartoons and Doctor Who. The point seems clear: stereoscopic views are best left as a children’s toy.

Nevertheless, the quest for 3-D effects in photography continues. Experiments in holographic projection have been taking place for decades now, but they tend to lean toward motion picture work rather than stills. I’ve seen some exceptions, as in the work of Al Razutis and other holographers, but as these lean toward painting more than photography they merely reaffirm the rule. Even View-Master itself has become a virtual reality app for smartphones.

Presumably the third dimension is the final frontier for overcoming the limitations of photographic vision. People have been trying to overcome them for over 150 years. But are they really limitations? I have never thought so. The peculiarities of static, monocular, flat photography offer another way of perceiving reality. They have never been, despite what pundits like Sontag and Baudrillard think, a substitute for that reality. Photographic vision is a mode of engaging reality that creatively rearranges one’s perceptions of the actual. This is a strength, not a weakness. It enriches the human experience of vision to see how one might see differently rather than what one might see in the deep imaginations of the mind. With the current emphasis on exotic techniques of virtual reality, it is important to remember Proust’s comment that while it may be a great journey to visit 10,000 differerent worlds, it is also a great journey to visit one world with 10,000 different sets of eyes.