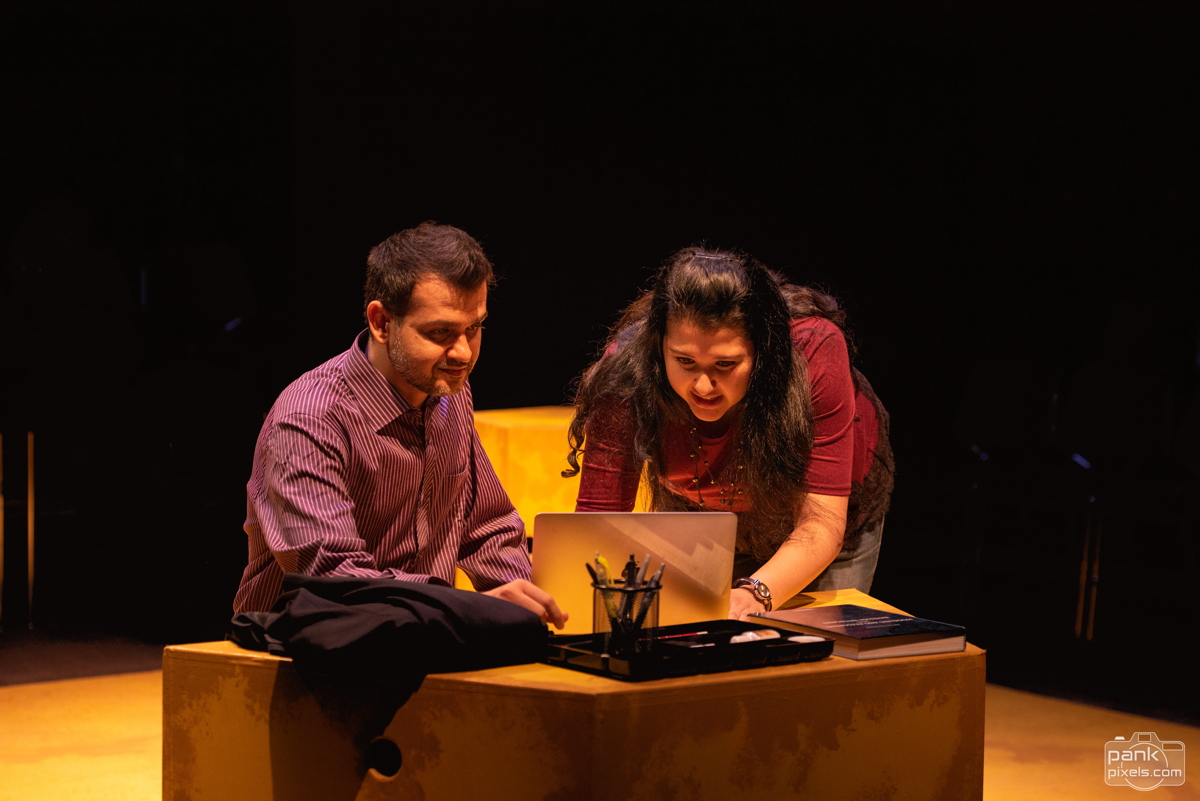 Any longtime reader of The Seattle Star knows that I prize the ability of art to stir the moral imagination. Especially in the 21st Century when morality has taken a back seat to ideology it seems to me that is the main purpose of art.

Stirring the moral imagination, however, differs from merely portraying moral decision-making. Plenty of soap operas and telenovelas portray moral choices — indeed moral choices form almost the entire substance of soap opera — but this is not enough. Stimulating the moral imagination requires that the drama offer empathy, but empathy, too, is not enough.

Pratidhwani’s Queen portrays a choice between right and wrong, which is exactly what makes it a conventional play. That’s not a bad thing necessarily. There are bad conventional plays and good ones. Madhuri Shekar’s play is not too bad, but it’s deeply flawed.

When the chips are down most people fold because, as Albert Camus put it, “It is always easy to be logical. It is almost impossible to be logical to the bitter end.” Especially at great personal cost. But that cost ought to be the stakes of a work of art that is supposed to stimulate the moral imagination. Nothing less will do.

That’s sort of the problem with the basic conflict in Queen. As a scientist stuck with incontrovertible results that she has to report, Sanam has to choose between her career and her friend. Very dramatic, one could say. To me, however, this is no choice. Career loses every time. My own life is proof of the fact. But within this dramatic framework, friendship loses too. How could I expect a friend to accept me if I punted when it came to my ethics and the very things I hold most important? I would be forever known as the person who was willing to fudge results, the one whose integrity took a backseat to a temporary emotion. This would make any reasonably skeptical person — and I expect my friends to be reasonably skeptical — wonder what else I was willing to do. And seriously, why would I want a friend who wouldn’t put me in my place and remind me of my basic ethical principles and my duties to the community?

The final straw for me is the Big Moment when Sanam decides to commit her fraud because, hey, why not? It’s only science. As her advisor says, mathematics isn’t a pathway to God. It’s not the “truth.” Nor, I would add, is the absence of mathematics. This is, however, not the point. We are not in the realm of truth, despite what the playwright may think, but of facts — and facts can be false, as Sanam and Ariel know them to be. If facts are going to be chosen merely to illustrate a political platform, why bother with six years of research at all?

But by force of dramatic necessity, of course, it’s just as Sanam is about to throw away all her scientific credibility merely to appease her friend (and her own personal shame) that her friend comes to her rescue by suddenly balking — and this after she’s already told Sanam that her work doesn’t matter. This is cute and all, but Sanam’s betrayal of the facts is already a fait accompli. The dramatic arrangement seems to suggest that it’s all okay anyway, because the paper is never published, and at any rate at least there’s another paper to be written and more research to be done…together…like friends…

This is the kind of thing that makes me sigh.

Instead of a play about the moral imagination, Queen is a somewhat evolved soap opera featuring moral choices. On that level it’s acceptable. The actors are up to the task. Archana Srikanta makes an excellent Sanam. Pratik Shah is an excellent foil for her, especially given the limitations of his part. Isis King and Stephen Grenley are exactly as I expect them to be. Agastya Kohli’s direction is, as usual, generally invisible, calling no attention to itself with its seamless flow and sensitivity to space. As melodrama goes this is about as good as it gets.

But I keep looking for something deeper. I am hoping for an exploration of what Niels Bohr called “profound truths recognized by the fact that the opposite is also a profound truth, in contrast to trivialities where opposites are obviously absurd.” Facts are trivialities. Numbers are just numbers. They are not the drama. The drama is not only in what we choose to make numbers mean, but also in why we choose that rather than another. That would be the real investigation of “truth” that is not on display here.

My astronomy teacher used to quote (I think) James Clerk Maxwell’s comment that mathematics, and science with it, is “The Great Metaphor.” As any reader of Mark Johnson’s book Moral Imagination: Implications of Cognitive Science for Ethics knows, metaphor is the basis for the moral imagination. That being so, it should be much easier to dramatize situations that activate the moral imagination than Queen makes it out to be. But one will have to be logical to the bitter end, or, at the very least, inquisitive to the bitter end.