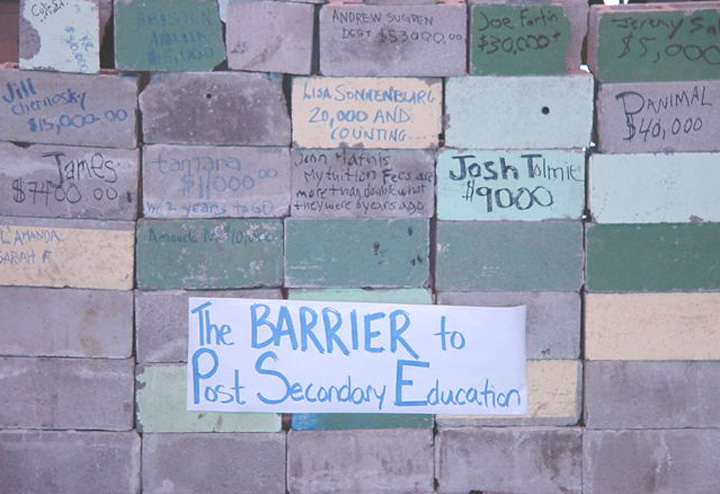 With a default rate approaching 40 percent, one would expect armies of distressed borrowers marching in the streets demanding relief from a system that has singled out their financial anguish. Distressed student debtors, however, seem to be terror-struck about coming forward to a society that, they say, ostracizes them for their inability to keep up with their finances.

When we spoke to several student borrowers, almost none were willing to share their names. “I can’t tell anyone how much I’m struggling,” says a 39-year-old Oregon physician who went into student loan default after his wife’s illness drained their finances. He is terrified of losing his patients and reputation if he speaks out about his financial problems.

“If I shared this with anyone they will look down upon me as some kind of fool,” explains a North Carolina psychologist who is now beyond retirement age. He explains that his student debt balance soared after losing a well-paying position during the financial crisis, and that he is struggling to pay it back.

Financial shame alienates struggling borrowers. Debtors blame themselves and self-loathe when they can’t make their payments, explains Colette Simone, a Michigan psychologist. “There is so much fear of sharing the reality of their financial situation and the devastation it is causing in every facet of their lives,” she says. “The consequences of coming forward can result in social pushback and possible job–related complications, which only deepen their suffering.”

Debtors are isolated, anxious, and in the worst cases have taken their own lives. Simone confirms that she has “worked with debtors who were suicidal or had psychological breakdowns requiring psychiatric hospitalization.”

With an average debt of just over $37,000 per borrower for the class of 2016, and given that incomes have been flat since the 1970s, it’s not surprising that borrowers are struggling to pay. Student loans have a squeaky-clean reputation, and society tends to view them as a noble symbol of the taxpayers’ generosity to the working poor. Fear of facing society’s ostracism for failure to pay them back has left borrowers alienated and trapped in a lending system that is engulfing them in debt bondage.

Student debtors can counter despair by fighting back through activism and political engagement, she says. “Connection is the antidote to alienation, and engaging in activism, along with therapy, is a way to recovery.”

Despite the fear of coming forward, some activists are building a social movement in which meaningful connections among borrowers can counter the taboo of openly admitting financial ruin.

Student Loan Justice, a national grassroots lobby group, is attempting to build this movement by pushing for robust legislation to return bankruptcy protections to borrowers. The group has active chapters in almost every state, with members directly lobbying their local representatives to sign on as co-sponsors to HR 2366. Activists are building a supportive community for struggling borrowers through political agitation, local engagement, storytelling, and by spreading a courageous message of hope that may embolden traumatized borrowers to come forward and unite.

Julie Margetaa Morgan, a fellow at The Roosevelt Institute, recently noted that student debt servicers like Navient have a powerful influence on lawmakers. “Student loan borrowers may not have millions to spend on lobbying, but they have something equally, if not more, powerful: millions of voices,” she says.

A recent manifesto by activist and recent graduate Eli Campbell calls for radical unity among borrowers. “Young people live in constant fear that they’ll never be able to pay off their debt. We’re not buying houses or able to afford the hallmarks of the American dream,” he explains.

In his call for a unified national boycott of student loan payments, inevitably leading to a mass default on this debt, Campbell hopes to expose this crisis and instigate radical change. In a recent interview he explained that the conditions for borrowers are so bad already that debtors may not join the boycott willingly. Instead, participation may simply happen by default given the lack of proper work opportunities that lead to borrowers’ inability to pay.

While a large-scale default may not happen through willful and supportive collective action, ending the secrecy of the crisis through massive national attention may destigmatize the shame of financial defeat and finally bring debtors out of the isolation that causes them so much despair.

Activists are calling for a significant conversation about the commodification of educating our youth, shifting our focus toward investing into the promise of the young and able, rather than the guarantee of their perpetual debt bondage. In calling for collective action they soothe the hurt of so many alienated debtors, breaking the taboos that allow them to say, “Me, too” and admit openly that in this financial climate we all need each other to move forward.

Daniela Senderowicz wrote this article for YES! Magazine. She is a Northwest activist and writer.