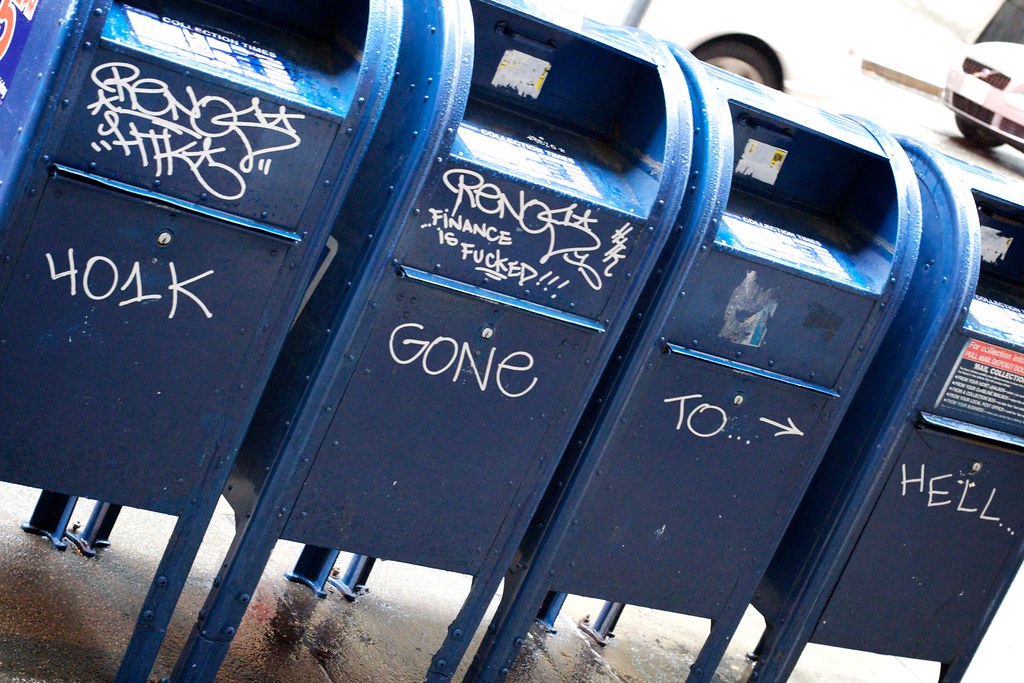 Many people studying retirement income have long warned about the risk to future retirees from the collapse of the traditional defined benefit pension. Middle-class workers have generally been able to enjoy reasonably comfortable retirements due to the income these defined pensions provided, in addition to their Social Security.

However, with defined benefit pensions rapidly disappearing, and Social Security benefits replacing a smaller share of income, the prospects for future retirees looks considerably worse. An increase in the percentage of health care costs not covered by Medicare also does not help.

Conservatives have long argued that the loss of defined benefit pensions was no big deal since 401(k)s and IRAs would fill the gap. Many actually claimed that these retirement instruments were superior to pensions since workers have more control over these defined contribution systems, where workers decide how much they want to contribute and how quickly they draw it down.

That claim is harder to make now that 401(k)s have been in existence for almost four decades. The situation for near-retirees does not look very good. They are going to have to work until age 67 to collect full Social Security benefits.

Last year, economist David Rosnick looked at the most recent Survey of Consumer Finance from the Federal Reserve Board. It showed that the middle quintile of households in the 55 to 64 age range had, on average, just $99,000 in retirement savings.

That amount of retirement savings could provide a boost of roughly $5,000 to $6,000 a year above Social Security income. That is roughly half as much as the middle quintile of current retirees receives from defined benefit pensions. (This group of current retirees already gets over $2,000 a year, on average, from defined contribution plans like 401(k)s or 403(b)s.) It is also worth noting that the homeowners in this group now have an average of just 58.5 percent of their home paid off, compared to 81.0 percent in 1989. We can expect a serious decline in retiree living standards.

There are two reasons why 401(k)s have not filled the gap created by the loss of traditional pensions. The first is simply that many workers don’t have them at their workplace. Either employers don’t enroll workers until they are employed for a year or two, or businesses find the paperwork associated with a 401(k) to be too big of a headache. As a result, only 50 percent of workers currently contribute to a 401(k).

The second big problem is that financial industry fees eat up much of what gets contributed to these accounts. Average expenses of 401(k)s run over 1.0 percent of holdings and in some companies as much as 2.0 percent. This is a huge deal.

The losses would be even larger for workers making bigger contributions. A worker putting $6,000 into their account for 30 years, and paying 2.0 percent in fees, will have made a gift of $100,000 to the financial industry.

This is where the Oregon story comes in. Oregon has established a system of state-managed accounts where employers who do not have their own retirement plan are required to enroll their employees. The plan has a default 5 percent contribution from workers. While workers can opt out of this contribution, the overwhelming majority have chosen not to do so. By having workers contribute every year, and by having a system with far lower costs than privately managed 401(k)s, workers can expect retirement incomes of close to 80 percent of their working income when the system is fully phased in.

It is great to see this system in place in Oregon, but similar systems will also soon be in operation in California, New York, Illinois and several other states. These systems will likely require adjustments as time goes on, but by ensuring that workers contribute in most years of employment and that costs are low, workers can use these systems to replace the retirement that used to come from traditional pensions.

Ideally, this sort of system could be implemented nationally, but with the current president and Congress, that is out of the question. Even if the Democrats retake the White House in 2020, they may not have the ability to get a system like this through Congress.

As a result, we are likely to see the same sort of divide with retirement income that we already see with minimum wages, paid family and sick leave, and other benefits for workers and families. Progressive states are moving forward with measures that ensure their residents a decent standard of living. Meanwhile, the states controlled by Republicans are going as fast as they can in the opposite direction.

This is not a good story for the tens of millions of workers and their families that happen to live in Republican states. But we should at least be glad that workers in some states are benefiting from progressive policies and hope that the rest of the country will follow the same path before too long.