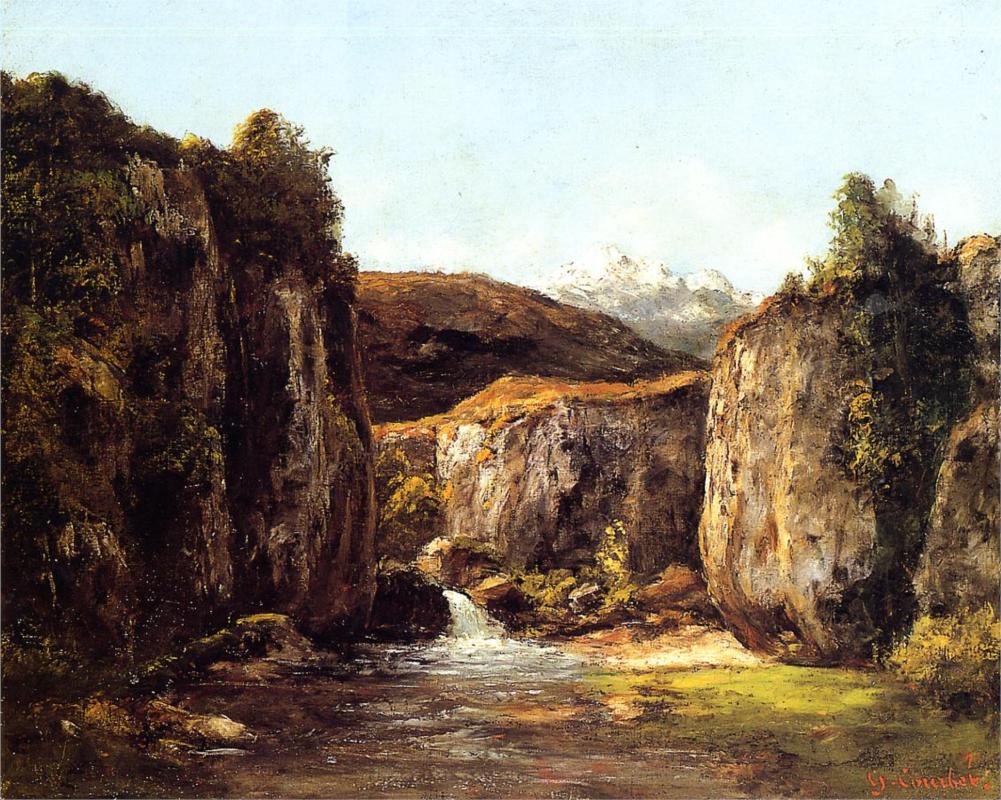 From what fabulous mating of a slug with a peacock, from what genital antitheses, from what sebaceous oozing can have been generated, for instance, this thing called Mr. Gustave Courbet? Under what cloche, with the help of what manure, as a result of what mixture of wine, beer, corrosive mucus and flatulent edema can have grown this rotund and hairy pumpkin, this glorified paunch, this imbecilic and impotent incarnation of the ego? Do not say a joke of God, for God, whom this non-entity would destroy, is incapable of such a joke and would not bother. And such are his erratic and crooked forms that they are for thousands the most revolutionary zoology since that little tart named Paschal Grousset turned into a red-striped clown named Pipe-en-Bois. Such lofty heights! We shall say nothing of his women, out of respect, for they do resemble women–when they are dead.

They don’t write art criticism like that anymore. Not because art critics are any more polite than they were in 19th Century Paris–they are certainly not–but rather because the 21st Century accepts art as completely inconsequential to the society at large. Nothing now is at stake, either philosophically or socially, whenever citizens talk about art. The very idea of something like “degenerate art” is completely alien to contemporary American society.

Once upon a time the degenerate art that fomented scandals and causes celebres was called “realism.” This probably seems absurd to Americans now. The default expectation of virtually every American audience for art, whether performing art or visual, is “realism.” Yet in the middle of the 19th Century, realism was derided as uncivil, antisocial and degenerate.

It’s hard to imagine how such a straightforward art style could possibly have caused such an uproar. But that’s largely because people have little idea of the context. The revolutions of 1848 brought together the working classes and the petite-bourgeoisie in February of that year, establishing the Second Republic. By June, however, the sharply divided classes turned against each other and ultimately leading to the new republic’s failure by 1851. Where peasants and country workers had united with the denizens of the city to overthrow Louis-Phillipe, city dwellers of the 1850s began to see anything rural as uncultured, plain, and stupid. This played neatly into the fever of the Second Empire with its nouveau-riche as the new aristocracy.

Gustave Courbet himself, an ardent anti-monarchist whose grandfather had fought in the French Revolution, had come into Paris from the outer provinces as one of those country workers. Parisians of the time believed that the city was dirty, smelly, chaotic, and needed a complete “refreshment.” It reached such a level of absurdity that people believed smells of the poor and of the pretty were actually contagious, as a new class of “deodorized bourgeoisie” began their plans to clean up the city. In France this took the form of a classist hierarchy based on smells: dirty, smelly people represented the peasant class and the anti-Republican countryside, and were thus a social threat as well as an olfactory one; the chlorine-clean city dweller represented the elite status and power of the new bourgeoisie.

Milan Kundera wrote in The Unbearable Lightness of Being, “Whenever a single political movement corners power, we find ourselves in the realm of totalitarian kitsch…. Everything that infringes on kitsch must be banished for life.” In the France of 1848 and even more truly in the France of 1851, that was exactly the case. Kitsch dominated French academic painting. This is not surprising. Cardinal Mazarin had set up the Academie des Beaux-Arts for a very specific reason, as Albert Boime stated in The Academy and French Painting in the Nineteenth Century: “Control instruction and you will control style.” The corollary should be obvious: control style and you will also control discourse.

What Courbet brought to French painting was simple: he brought shit. As Kundera noted, the absolute denial of shit is the foundation of kitsch, both artistic and political, and no society denied shit more than sanitary modernizers of 19th Century France, led by Baron Hausmann. This is what made Courbet’s dirty realism such an affront. Frenchmen in general and Parisians in particular were not ready.

The effect Courbet had on the mid-century Parisian art world is easier shown than described. Allow me to do this by comparison. This is a painting by one of the darlings of the French Academie des Beaux-Arts, William-Adolphe Bouguereau.

This is a painting of the same title by Courbet.

Perhaps that comparison is too subtle. Here’s another. First, Bouguereau.

This is perhaps also too subtle. How about this?

The comparison may seem at first unfair to Bouguereau. I assure you it isn’t. Bouguereau was one of the “better” painters out of the Academie des Beaux-Arts in the 19th Century. His work represents the culmination of its 250-year tradition.

Courbet hated that tradition, its pretension, its vacuousness. He shares that loathing for the academic tradition with the Romantic painters of his time as well, such as Delacroix. Unlike Delacroix, however, Courbet channeled his romanticism and its essential belief of universal improvement into a naked Realism. Realism was the antidote to kitsch. As he wrote to his patron, Champfleury, “It is society at its best, its worst, its average–in short, it’s my way of seeing society with all its interests and passions. It’s the whole world coming to me to be painted.”

The world that came to Courbet to be painted was the world of labor, stench, dirt. It was the antithesis of deodorized art for deodorized bourgeoisie. Parisians rebelled against it. Insults and epithets rained down upon him, not the least of which was that his colors were “dirty” and his paintings “smelled”–which, in mid-century Paris, meant that he was a peasant, an outsider, a rebel dangerous to the new world order of hygienic kitsch. Courbet could even asphyxiate a gentleman with the smell of his paints as in this caricature by Cham.

Realism, for Courbet, was a weapon against the bourgeoisie who would deny basic reality in pursuit of an antiseptic order to impose upon life and even upon death itself, as in the relocation of the graveyard in Courbet’s hometown of Ornans into a new, improved, sanitary area which, doubtless, was supremely powder-fresh. Courbet’s painting of this event of supreme hubris, A Burial at Ornans, illustrated and undermined this absurdity by turning the entire convention of memorial painting on its ear. The painting strips away all grandeur, all solemnity, all pretense of immortality, all optimism of resurrection, confronting the bourgeois viewers of Paris with something truly dark, ambiguous, and most distinctly not triumphal.

Critics hated it, naturally. “He paints pictures as you black your boots,” one of them wrote. Every upstanding Parisian knew exactly what that meant: not only was he a bootblack, i.e., a laborer, he was also dirty and smelly and thus a recognizable threat to society.

T.J. Clark, in his book on Courbet, wrote “So far, nineteenth-century art history has usually been studied under two headings: the history of an heroic avant-garde, and the movement away from literary and historical subject matter towards an art of pure sensation. But what a bore these two histories have become! We shall retrieve the meaning of these concepts only if we demote them, uncover the avant-garde only if we criticize it, see the point of an art of pure sensation only if we put back the terror into the whole project.”

Without an understanding of the terror of realism, it is impossible for one to appreciate how truly groundbreaking (or, if you’ll permit a Courbetiste pun, stonebreaking) it was. Without a historical context, one can hardly understand the terror. History itself was the terror, from its threats of painful repetition of the past–Courbet’s painting that was his “statement of principles” barely precedes the imperial coup of Louis Napoleon III–to its promise of a careless, mechanical and antiseptic bourgeois future.

The failure of realism in the 21st Century is that it has become a tool for the bourgeoisie. Rather than an avant-garde or “an art of pure sensation” it has devolved into an art of superficial effect. Hollywood CGI is one particular strand of this. The subject matter of so-called realistic work in the contemporary arts routinely lacks anything like the class consciousness of a Courbet, and has rarely anything at all to do with the working classes, country laborers, and common folk on whose portraits the renown of Courbet, Millet, Daumier and others rests.

Behind the realism movements in French painting and literature was a background of modernization. But a very peculiar kind of modernization. The philosophical background that informed it rested upon the positivist belief in science and knowing the material world as an object to be observed and tested, and thus controlled. Yet it also held that moral and intellectual ideas of beauty were only effective when idealized–absolute anathema to the principles of realism.

That philosophy, however, with its underpinnings of objective evidence and belief in modernizing (aka cleaning up the world) found its supreme dialogue not in painting at all, but rather in the most important tool devised by 19th Century positivist science: photography. What should have been the realist’s tool par excellence became a tool of a much different kind.