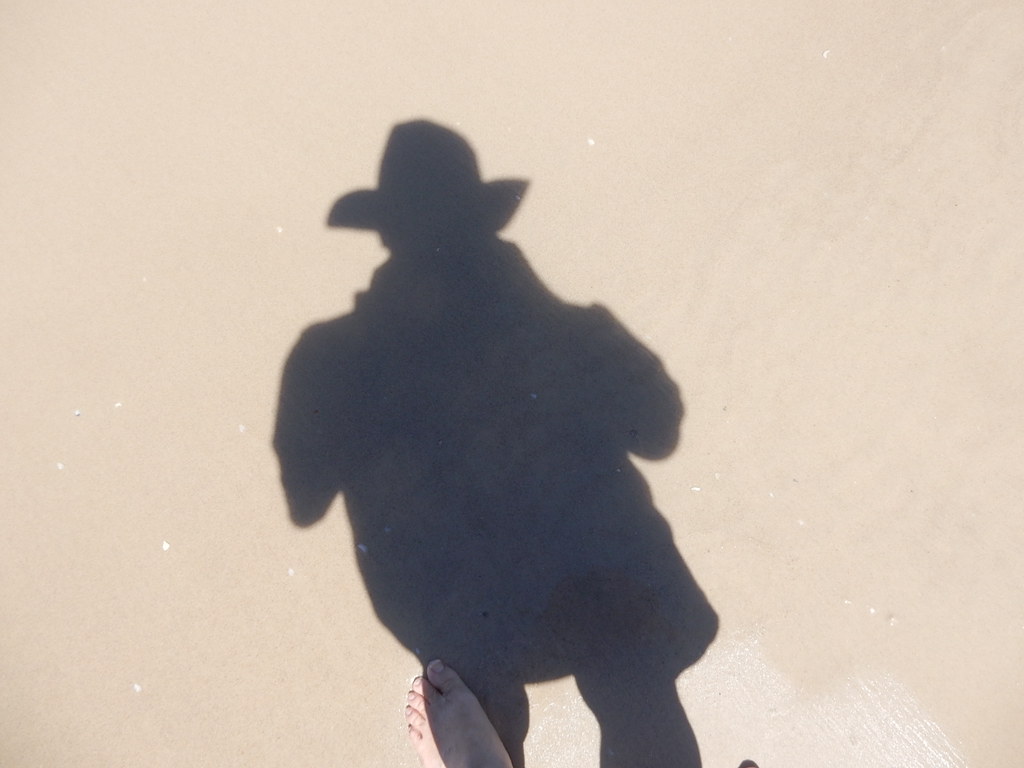 That’s what I’ve been working on for the past few months. It’s getting closer to completion but some things remain to be solved within it. I intend to do my best to solve them and finish the book before summer.

Meanwhile I’ve continued thinking about photographs like this one.

Because it presents a cipher to me, I keep coming back to this photograph. As many times as I’ve looked at it, many things about it remain unclear or downright mysterious. Take a look.

I’ve left it uncorrected from my scanner.

The photograph is dated May 1963 on the recto. There is nothing on the verso side of the photograph beyond the usual Kodak markings, so I have no reason to doubt it is from early 1963, maybe a month earlier than May depending on when the photographer actually bothered to send the film to the lab.

The sun is coming from the left side of the frame (note the shadows), and is fairly high. It’s almost a neat 45 degree angle. This is probably around 2 pm or so. The picture is slightly out of focus. The camera seems to have produced a slight defect in the address numbers particularly, almost a kind of double strike. The picture is also quite wide in aspect ratio. The print as I hold it is 3.5″ by 5.25″. This is a highly unusual size. Standard 35mm film has an aspect ratio of 1.5:1, which at this size print would be an even 3″ x 5″ like an index card.

The only roll film I know to be this size is Kodak 828, which was produced by omitting the sprocket holes of standard 35mm, thus increasing the size from 28mm by 35mm to 28mm by 40mm. Very few cameras could take 828 film. I know of two by Kodak, three by Coronet in England, and one by Hoei from Japan, plus a handful of cheap plastic roy cameras. Zeiss made an adapter for their Ikonta but those are far from common, too. Likely this was a picture from a folding Kodak Bantam or a Kodak Pony.

From this I conclude that the picture is not taken by a professional with a tripod, but rather more likely by an amateur who saw something worth capturing.

But what? It isn’t obvious on first glance.

The picture isn’t in two equal halves, but it’s close. Generally this implies a comparative technique: i.e., one side says this, the other says this, etc. But if there’s a comparison here it is subtler than most. The houses are extremely similar. The garage doors are identical both in size and design.

The house on the left of the frame has an even roof height from the main dwelling area to the garage. The house on the right has a broken height; the garage roof is clearly lower than the main dwelling area. Is the garage itself an addition? It’s possible, but unlikely. 1963 is well before the rise of DIY home improvement following the publication of Time-Life’s book series in 1977. I don’t see any tell-tale joint in the paint or wood that would indicate this is new. More likely the roofing over the main house is a different design. It’s supported by poles.

The middle of the picture interests me. On the left the house has a fenced back yard. The house behind it is hard to make out, because the vanishing point of the photo is behind it, but on the right it’s clear there is another house with the exact same shaped garage as the first house in the foreground — the roofing brackets are identical — and, what I presume is across a street from it, yet another garage with the exact same garage door and gutter downspout. But these are far in the background.

The lawn of both houses are angular, shaped by the contour of the poured cement. The grass is low. The greenery (such as it is), knee-high and recent (it has not grown together). There may be some roses alongside the garage on the right, but I cannot make out the flowers.

Stable lines dominate the overall composition of the photograph. Virtually everything here is vertical or horizontal. Oblique lines are small and hidden either by contrast or other shapes. The only thing resembling a curve in the image is the slight hump in the gutter formed where the two driveways meet the street. Everything is bright and high-key beneath the midday sun. The subdued tonal palette and the array of lines create the impression of stability and human artifice.

All of this is visible. But the question stays: Why would someone take this photograph?

The more I look at it, the more I begin to decide that this is a picture of, and about suburbia. These houses are certainly part of the post-WWII era of tract housing. The “reverse assembly line” housing construction model of Levitt & Sons construction had already given the nation Levittowns in New York, Pennsylvania, and New Jersey by this time, and a new one in Puerto Rico was just about to be finished at the time of the photograph. The Interstate Highway System signed into law in 1956 by President Eisenhower was beginning to stretch across the nation and create a massive network of roads that would soon lead to people moving even further out of dense urban areas into nowheresville settlements. To sell this “dream” to Americans required Americans to believe that this was “safer” and more stable than the chaos of large cities.

I have come to believe this is the point of the photograph. The house on the right is better than the house on the left. Cleaner, neater, greener, more lavish, more well-maintained. I think this is most likely a photograph taken by one of the inhabitants of the house on the right to prove their calm superiority and to inspire envy in others. They may not have a fenced-in backyard like the neighbors, but they have so much more. This image is all about minor variations. In this sterile, rigid suburban environment, those minor variations are all one has to separate oneself from the Joneses next door.