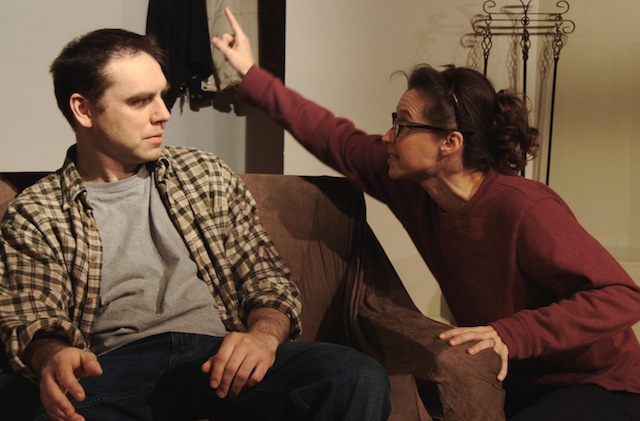 To call Cradle and All a full-length play would be a bit of a misnomer. The two one-acts of which the show is comprised are connected–thematically so, and by the fact they’re set in adjoining Brooklyn Heights apartments–yet essentially autonomous. Neither act would hold any less water with the omission of the other. The characters of both plays are portrayed by the same two actors (the talented Matthew Middleton and Alyson Bedford), Cradle looks at parenthood from a couple angles, first, “What if I had a baby?,” then, “How am I going to care for this baby I have?” It’s up through February 18th at Theater Schmeater.

My first thought after seeing the play was, “What does playwright Daniel Goldfarb know about parenthood?” A little research turned up that at the time of the premiere of Cradle (June 2011, Manhattan Theatre Club, NYC), the dramatist’s daughter would’ve been about four years old. To put the point more directly, a thirty-something-Jewish-New-Yorker-recent-parent-theater-person wrote two plays about  thirty-something-Jewish-New-Yorker-recent-or-potential-parent-theater-people (each one-act includes a character who is an actor). While there’s probably something to be said for the old axiom about ‘writing what you know,’ the very limited scope of the playwright’s attention does little textually to reach one for whom the situations are not familiar or relatable. Goldfarb’s considerable wit and taste for naturalism are not enough to prevent his show from stumbling upon triviality and mundanity.

Infantry, the first act, is a discussion/argument conducted by a swanky metropolitan couple, Claire and Luke, in “real time.” With Claire’s biological clock ticking as her birthday approaches and Luke’s increasing professional success (he’s just pulled a large commission from having sold a $600,000 Tiffany lamp) providing financial stability, the topic of parenthood is broached. The sound of the neighbor’s crying child striking Claire’s ear as sweet music, Luke’s as horrendous racket, the two attempt to establish some common ground. Claire urges Luke to consider fathering the child he’s been so steadfast about not wanting, Luke grapples to make sense of this sudden change of Claire’s tune, they discuss their perspectives.

Writing a compelling two-person play is an incredible challenge in the first place. Writing a two-person play concerning such a high-consequence and intimate relationship compounds the challenge: A couple that’s been together over five years have already had a lot of conversations about any number of things and it’s clear this couple already know a lot about each another. There’s little justification for the two of them reminding one another of things they already know; it’s the stuff awkward exposition is made of. Infantry, while it fares somewhat well in this respect, is far from escaping the snag cleanly. For these characters to’ve been ignorant to the essential, character-forming things they’re discovering about one another onstage would be for them not to’ve known one another at all. Maybe this is the playwright’s intention, but if so, it drives the drama into farce.

The first act ends neither with a bang nor a thud, it tapers off strangely to conclude in irresolution. For a story about two peoples’ inability or unwillingness to really listen to one another, perhaps this is apropos. It may be apropos, but it doesn’t make for a very filling meal.

The second act, The Extinction Method, is probably the superior of the two plays. A comedy, Extinction concerns Annie and Nate, hapless parents of an eleven-month-old girl that won’t stop crying (it’s the sound of their wailing baby emanating through the walls that waters the fantasies of motherhood in Claire’s mind). Determined to do whatever it takes to teach their child to sleep alone, Annie and Nate are attempting the, “let her cry it off alone” approach. A miserable project. It’s this project that makes Extinction better than Infantry: Annie and Nate are actually doing something, there is some action taking place derived from an understandable objective. Luke and Claire only talk about stuff and invent points for the imaginary scoreboard, but there’s nowhere for the talk to stick. Also, Extinction happens to provide some welcome relief from the gloom of the previous offering.

It’s important for me to mention that these negative reactions have almost everything to do with the script. Goldfarb is obviously a smart man with an impressive set of literary skills at his disposal, and there’s nothing wrong with sharp minds writing light material. But light work can still be ambitious, and this text is not. Strangely, I’m articulating to myself that if I had written this review the night of the performance it probably would have come out much more positive and enthusiastic. Upon reflection, however, I’m realizing the emptiness of the dramatic calories, and recognizing how immediately the pleasurable flavors were to disappear from my palate.

All of this said, Schmee does some really fantastic work with the material. Middleton and Bedford each craft two very distinct and unique personalities for their respective characters, and flex considerable muscles, both tragic and comedic, in doing so. With the possible exception of Middleton’s portrayal of Luke–whom the script indicates is effectively a self-loathing loser who sold out his dreams for hollow stability, but who is portrayed as a mix of pragmatism and rigid self-posession–the Theater Schmeater renderings of the characters and their struggles milk out almost all of the nectar with sensitivity and attention. Keen director J.D. Lloyd, in collaboration with a rock solid team, gets every mile from this particular car. But it doesn’t seem the vehicle was roadworthy.

To end on a positive note, the set and sound design are utterly fantastic, and will be elements of this production upon which I will reflect with unalloyed approval and admiration. I’m likely to reference them as I measure the strengths of sound and set designs in the future.