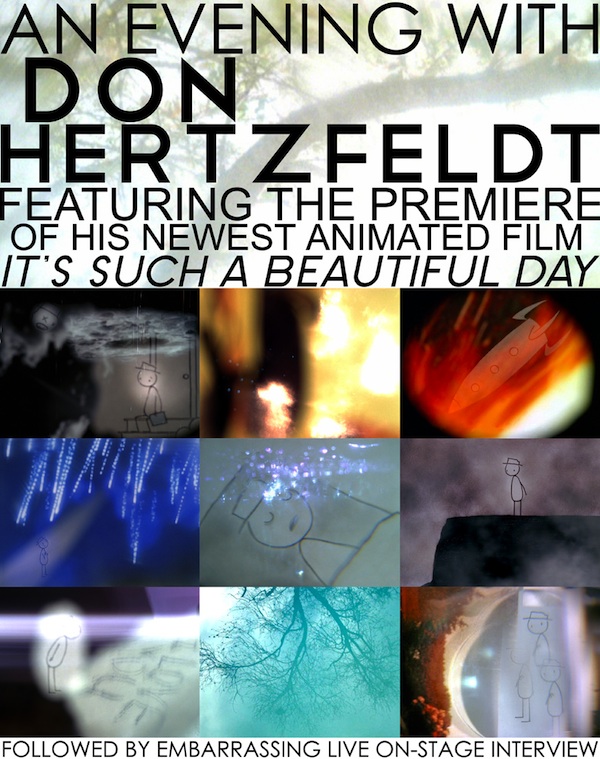 As anyone who ever attended a Puget Sound Cinema Society screening knows, I love Don Hertzfeldt’s work. I was honored to present his Bitter Films before they had become hip. His brilliant Lily and Jim was one of the show-stoppers of the old PSCS days and his work has only grown funnier and richer since then.

It is easy to write a lot of fanboy-style hype about Don Hertzfeldt. At age 33 he had already won a Lifetime Achievement Award and been named one of the 100 Most Important Animators of all time. Even Kellogg’s felt compelled to rip off his stick figure style for their series of Pop-Tarts adds, which annoyed the cavalier Mr. Hertzfeldt but he graciously wrote it off as “Well, you can’t copyright a squiggle.”

Don Hertzfeldt’s work is hardly mere squiggles. If one were to believe his press releases, his work is always “nearly two years in the making, as its special effects were meticulously created directly on film, using traditional double exposures, in-camera mattes, and innovative experimental techniques.”

That’s as may be, since the important thing is not how long it took or what techniques were used. The important thing is that there are few other filmmakers who capture hilarious and painful moments in human relationships as brilliantly. His deadpan narrative style and simple doodles evoke a cool, detached world the way any hip, self-affected comedian does. The difference in Mr. Hertzfeldt’s work is that irony is not a pose, it is a setting. His work plays out the consequences of hip, self-affected humans in a cool, detached (and probably hostile) world. Relationships are not merely banal but impossible. Objects are not just obstructions but enemies.

It all sounds very harsh and serious. It is. And that is precisely what makes it funny. Don Hertzfeldt’s works are master classes in gallows humor.

Mr. Hertzfeldt will bring the entire Everything will be OK trilogy to SIFF Cinema Uptown tonight, including the Seattle premiere of the long-awaited third film entitled It’s such a beautiful day. In the filmmaker’s own words, a short and embarassing interview will occur after the screening, so this could be the night to make it all happen.