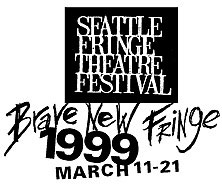 Conventional wisdom has it that Seattle is simply a safe and conservative theater town; this argument certainly seems to be supported when taking in the programming theater companies offer throughout the city. While there are exceptions to the rule, both big (On the Boards) and small (boom! theater, Satori Group, etc.) — places not only committed to new works, but also focus on experimentation in their programming to whatever degree of success. Certainly, our big houses are havens of conformity, generally offering safe and not-too-risky fare filled with linear storytelling and dramatic realism.

Which isn’t to say that the fringe houses are much better; over the last decade, the spirit of adventure seems to have, slowly but surely, left town. Things have gotten to the point where the fringe consists of companies that are either dedicated to pastiches, movie adaptations, genre exercises and quirky-for-the-sake-of-quirky new works, or they are busy trying to become the next Seattle Public Theater, offering safe, tried and true plays that are generally familiar. All under the aegis of appealing to an audience that has stopped being daring and just don’t go out to theater as much as they used to. Again, this is according to conventional wisdom, which is why we see remounts of plays about talking dogs, 40 year old Neil Simon plays, classics-done-with-superheroes-as-reality-TV and Silent Night, Deadly Night: The Musical.

Newcomers to Seattle would be forgiven for not knowing that things weren’t always this way in town, and one need look no further than the successful and all-too-brief run of the Seattle Fringe Theater Festival (1990 – 2003). The latter end of that run saw the organization that administered the festival trying to do too much too quickly (changing leadership, pricing structure, even the time of year it took place in just one season); but when it worked, at its best, the Fringe Festival served not just as an annual reminder of the artistic riches found in our city (many of our city’s celebrated artists had their work seen at the Fest: John Osebold, Jennifer Zeyl, Mark Siano, Tommy Smith, Lisa Viertel, and performance companies too numerous to mention), but also as an encouragement to the Seattle populace to simply go out and try things. Maybe a production pushed too many buttons, maybe it was too safe, or too boring, maybe it was too disagreeable — it didn’t matter, you were experiencing theater. For every clunky failure, something stunning managed to rise to the top. This did much more to instill an adventuresome spirit in our audiences than cycling through the same 20 – 40 plays with the occasional production of Pulp Shakespeare or camped-out-cross-dressed Harvey ever would.

Not to get too blindly nostalgic about it; the Festival had its share of faults, as this piece written toward the end of its first run overstates–it should be noted that when these criticisms (the piece is representative of the tenor with which they were perpetually shared) were rashly heeded, it led to the “too much too quickly” nature of the festival’s demise. However, when placed in the Spring it seemed to exclude international acts, for one thing. That it held as many mediocrities as it did triumphs is just the nature of Fringe Festivals worldwide — a crap production is a crap production, regardless of whether you’re in Seattle or Edinburgh. On the whole, however, the festival did more good than harm during its thirteen years.

Its death in 2003 coincided with the last gasping breaths of the dot-com-bust and presaged the dark, fallow years Seattle theater would experience through the remainder of the decade. There have been several attempts to resuscitate it, but none have stuck until now: The Seattle Fringe Theater Festival is slated to be reborn later this Fall. At the moment, all the group has is a Facebook page, the wave of official announcements will arrive next week.

This year’s festival revival will be much smaller in scope, in comparison with the size of the Fest by the end of its first run. It will take place over one weekend (September 19 – 23). Just 21 productions to be held in six venues on Capitol Hill (Annex, both venues at the Northwest Film Forum on 12th, West Hall in the Oddfellows Building, and Odd Duck, with the possibility of one more space if it’s needed). The productions will be selected by a lottery, and the team is hoping to attract some international acts as they head Westward on the Canadian Fringe Festival circuit.

There are plenty of other decisions that are still on the horizon for this troupe, but the first step toward success has already been taken: The Fringe Fest is back and will happen! With luck, it will meet with success and grow, providing opportunities to showcase the talent found at our Arts colleges, dance companies, sketch comedians.

The possibilities are intoxicating, and this is truly a reason to celebrate, regardless of how one remembers the last entity bearing the moniker. Now is the time to bask in the memories of Player King: Ballyhoo!, Letters to Wendy, H.P. Lovecraft’s Reanimator, The Insect Play, ad infinitum. What are your memories of the fest?