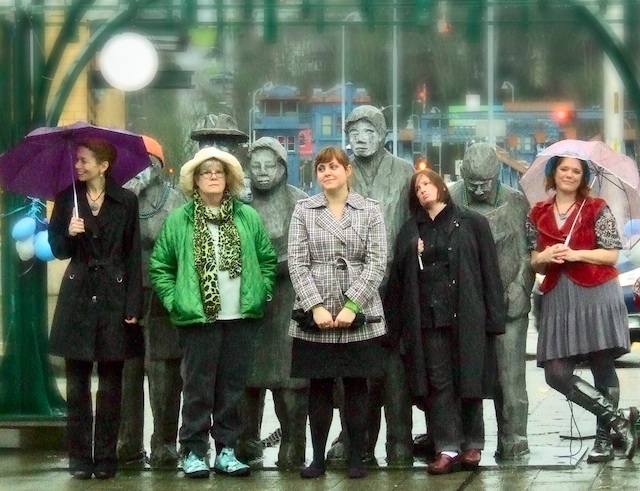 It often seems like we don’t spend enough time thinking about this city we call home; while that statement might be applicable to any city we live in, let’s stop and specifically ask: What is it about Seattle? What brings us here? Why do we choose to stay or decide to leave? And if one is a native, what to make of all of these damn interlopers who come here, usually with condescending attitudes about their new (often temporary) home, use up resources for their own gain, only to leave after not really contributing much to the community?

Regardless of where you find yourself in that last paragraph, there is one thing we can all agree on: Seattle is a beguiling city, with the capability of being aloof, distant, provincial, but also friendly, sincere and extremely rewarding, usually at the same time. This schizophrenic quality is only enhanced when you take the many disparate camps that seemingly work at cross purposes to remake the city to suit their needs without seeking any kind of compromise. What this myopic, mercenary and fruitless approach ignores is that, ultimately, Seattle generally functions as a mirror; one gets out of it only what one puts in.

This is, admittedly, both a simplistic and overly optimistic way to view the city that doesn’t account for the way those competing camps’ influence can impede progress for a high-minded individual. Neither does it explain the way the city ignores or throws away the various riches to be found within it; however, those are the very qualities that everyone who lives here must grapple and come to terms with, if they decide to make a go of it in Jet City. Until then, they are likely too busy falling in love with the place to put much thought into it.

All of the characters in S.P. Miskowski’s Emerald City could be found somewhere in that spectrum–the play is currently receiving its world premiere production by Live Girls Theater at Fremont’s West of Lenin. As it was discussed in her recent interview with the Star, Miskowski’s quite familiar with the gamut of emotions this city can instill, and she brings them all to bear in her tale.

Miskowski’s story centers around Scarlett (Jennifer Pratt), an aspiring author living in Irvine, CA who is currently struggling to attract interest in her book. According to her agent, Mary (Shawnmarie Stanton, who also composed the score), part of the reason for the lack of interest is that Scarlett has been sitting fallow, failing to complete writing assignments for any number of reasons. Mary has a promising opportunity, however, a human interest story for the LA Times about Dot (Gretchen Douma) that, if well executed, could turn Scarlett’s fortunes around. The catch? Dot and the story are in Seattle, a city that Scarlett has severe aversions to visiting again, mostly because she feels it was responsible for an extreme reversal of fortune which saw her losing her job, her home, her status, and most importantly, the love of her life.

As there is no backing out from this assignment, Mary suggests that Scarlett a) lay low and b) stay with an unpopular friend in order to avoid any unpleasantness with people from Scarlett’s past. Enter Tina (Morgan Rowe), Scarlett’s college roommate that she have vague misgivings about, but knows for a fact does not travel in Scarlett’s former circles. Caught in the wake of all of this activity is Lillian (Megan Ahiers), Scarlett’s current girlfriend, with whom she is affectionate, but the relationship has all of the earmarks of an uneven power dynamic. Lillian overcomes several personal hurdles and ends up coming to Seattle as well, and has her own relationship with the city develop.

These women are archetypal Seattlites, with one exception. Scarlett is the jaded former citizen who initially came to what she considered to be a podunk little town merely to exploit it; Tina is the eccentric granola new-agey person, who came here to pursue a passion but lost her focus along the way; Lillian is the new arrival whose journey of infatuation with the trappings should be familiar to anyone who has ever toyed with moving here. Dot is the native and great fun is had with the wry observations about folks like Scarlett. Finally, there’s Mary, who never gets anywhere near in Seattle; Scarlett would say that Mary represents Fate’s fickle nature in the Northwest, a belief that’s rebutted by the play’s final scene.

The only character missing from this synopsis is the titular Emerald City itself, and she has just as much to bear on the proceedings as anyone else. Presented on stage with great charm by numerous miniature sets and paintings, the city is depicted in all of its maddening glory, its history delved into in fine detail, and the make-up of its citizens exposed with care and honesty.

Accolades must be given to Brian Strickland and Michael Lindgren for their scenic design, and evoking so much of this city out of a sturdy, yet inexpensive (and unwieldy to work with, presumably) medium. Their work is highlighted by the direction of Meghan Arnette (assisted by Meggan Davis), who keep things moving with energy, emotion, a healthy amount of humor, and a recurring visual leitmotif using “spite mounds” as its inspiration, though the victim of the spite is not the character atop them, but usually one who’s been left off.

Quite simply, these are five sublime performances on display, certainly some of the best work seen by Ms. Rowe and Ms. Pratt. Ms. Ahiers’ unique charisma and comic sensibilities are finally given a proper spotlight in which to shine and she does not ring a false note. Ms. Douma and Ms. Stanton’s work in support more than rises to the level of their compatriots. All in support of Miskowski’s intelligent, heartfelt, and humorous script.

In lesser hands, this could have turned into badly misshapen soap opera dramatics topped by predictable gags about lattes, how much it rains and “hipsters sure do suck, don’t they?”. Instead, we have five actresses given distinct and substantive roles, each with their own arc to travel, each contributing to the larger complex picture being painted by the play. Instead of camp and ironic detachment, we get a portrait that’s as loving as it is damning, a sign that all involved actually give a damn about the play’s subject and the characters within it–quite a rare feat in our day and age.