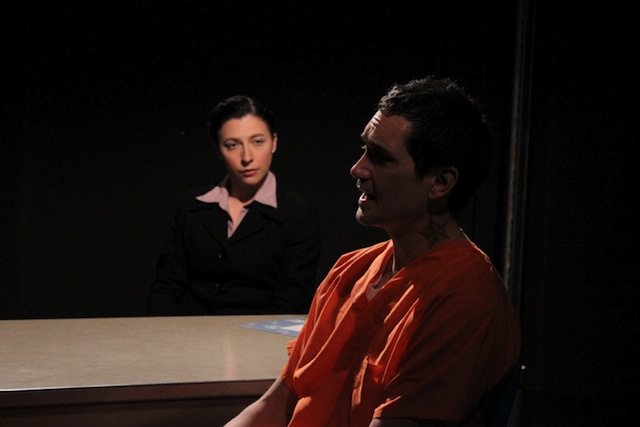 New York playwright Stephen Adly Guirgis’ star has been firmly on the rise for the last 12 years or so. His first five plays were directed by Philip Seymour Hoffman, and subsequently received critically acclaimed productions in New York and London. In 2011, his play The Motherfucker with the Hat was nominated for a handful of Tonys, including Best Play; a few scant weeks after the award ceremony, a strange (though not uncommon) decision to cast caucasian actors as Puerto Ricans in a Hartford, CT production of Motherfucker became the cause celebre for the playwright and variously pigmented actors across the land. On occasion, comparisons to a “modern day David Mamet” have been bandied about–not many, but the comparison has been made.

Locally, Guirgis’ plays have been produced three times over the last year: there was an undergrad student production at the UW of Motherfucker, Ghostlight Theatricals mounted his Last Days of Judas Iscariot this last April, and now Azeotrope is producing Guirgis’ 2000 play,Jesus Hopped the A Train, at ACT’s Eulalie Scandiuzzi Space. Of these, your correspondent hasn’t seen Judas Iscariot; while exposure to two scripts is hardly enough to form a concise opinion on a playwright’s work, given that Jesus and Motherfucker are examples from early and the latter end of his bibliography, it is enough to discern a number of patterns.

The pattern that emerges is one of a gifted playwright who is still a few hurdles away from living up to the full extent of his potential. There are two main issues, the lesser of which is actually tied to one of his strengths: It comes as no surprise that Guirgis began his career as an actor, as this is clearly evident in his writing, particularly his monologues. While monologues often work as a guide to understanding a given character, his monologues sound like the result of several Stanislavski exercises an actor performs in order to figure out their super-objective (a character’s main through line in a play). This, in and of itself, is no great crime; however, in some instances — particularly in Jesus — these character monologues do not really add anything to his stories aside from informing us where a particular character is coming from.

The other issue is simply that his plays are full of passive drama, they tell rather than show; it is for this reason that his plays are often called “slice of life”. As a result, the audience isn’t exactly transformed while watching a production of his plays. For example, Motherfucker centers around a fairly pivotal act of betrayal, which the audience doesn’t see, instead it is revealed (in a sensational manner) just before the intermission break as something that began several years prior. By the time the protagonist learns of this (not firsthand, mind you), the characters’ arcs so entrenched, that there really is nowhere for the play to go once the initial sensation of the betrayal, and the discovery thereof, has passed. The characters may be going through something intense, but the audience doesn’t really go through it with them.

This renders his plays serviceable mainly as a vehicle for his well-constructed words, and somewhat inert for dramatic purposes. The challenge for a theatrical production, then, is to deliver those words as subtly nuanced as possible, else they risk presenting nothing but an endless amount of scenery chewing by hambone actors. When done well, however, you end up with a series of evocative performances.

For her part, director Desdemona Chiang avoids the pitfalls inherent in the script, and instead provides a strong ensemble who do great justice to the words that they are given. This is combined with a clever set (Deanna Zibello), light (Jessica Trundy) and sound design (Jay Weinland), it results in an impressive package for a bantamweight story.

The plot: Angel Cruz (Richard Nguyen Sloniker) is incarcerated after shooting a religious charlatan in the ass, the false preacher lands in the hospital where complications ensue. Soon, Angel’s charge is upped to first degree murder. We meet his public defender, Mary Jane Hanrahan (Angela DiMarco), who sees something in Angel’s misguided actions that she finds worth fighting for. Concurrently, we meet Lucius Jenkins (Dumi), a man on death row for a heinous crime (a series of murders with victims from all walks of life), but who seems to be filled with a lust for the sun and genuine religious fervor. Initially watched over by a guard with a soft hand (Patrick Allcorn), Lucius’ comfort is downgraded at the hands of Valdez (Ray Tagavilla), who considers himself a moral man with no stomach for BS pampering of inmates.

Eventually Angel meets Lucius, and the bulk of the play covers the conversations these unrepentant men have with each other. Angel believes he had to do something to mete justice on a man who had hurt hundreds of others; Lucius admits that he committed an evil and unforgettable series of crimes, but he has since found God — since, according to his beliefs, the Almighty forgives those who come into Grace, he takes the leap of faith, praying that with acceptance will come absolution. A lot of energy is generated by the clashing of these two beliefs.

From top to bottom, these are characters who hubristically believe their convictions are solid because they’re in the right, and, with the exception of the two main characters, we are told of the ways these convictions are shaken and tested. We are allowed to see the instigating incidents that lead Angel and Lucius to question their beliefs, but not how those struggles manifested themselves — we are spared the crucible, just informed of the results. It seems Valdez may have softened his fascist stance on the prisoners under his watch, is this true? How? It would be great to see Mary Jane slowly put the pieces in place for her fall from grace, what was that moment like…In the sense that we are deprived of what could have been profoundly moving scenes performed by the ensemble, this is a shame.

The performances are the true jewels of this production, it is a treat to watch DiMarco own the room as a hard-shelled lawyer, similarly Tagavilla’s corrosive prison guard; Allcorn makes much out of a monologue at the end of the play where he describes the fate of Lucius. In the lead performances, Dumi and Nguyen Sloniker show an impressive range, neither settling for easy caricatures or over-method acting, they nail what emotional content their characters are given.

Ultimately, that is the frustrating aspect of Jesus Hopped the ‘A’ Train, these knockout performances are being done in the service of a tale that talks around the issues it purports to be about. Whatever your opinions are about humane conditions in prisons, the redemptive power of religion, or seeking justice in an unjust system, there is little here that will change your mind or deepen your understanding. While there is nothing wrong with sensationalism, or a straightforward presentation, but Meaning is needed in order to give the gravitas some legitimate weight.

Azeotrope, Chiang, and the ensemble create the desire to see more of these characters living from moment to moment, for that they must be commended. It is unfortunate that the play itself doesn’t give them the opportunity to do so.

Through Saturday, June 30, at 8:00p.m. // ACT’s Eulalie Scandiuzzi Space, 700 Union Street // $20 – $25, closing is reportedly sold out, but ACT’s website says that standby tickets are available the day of show. These will likely go fast.