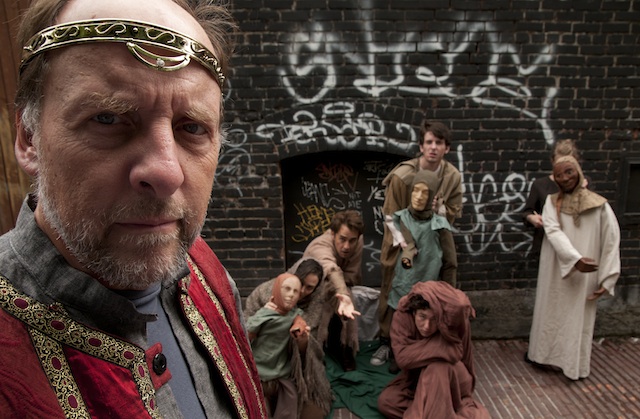 I am trying to build our theatre on the bedrock of municipal and civic responsibility. — Joseph Papp

In some way, all American public theater comes back to the East River Park Amphitheater. Before Joseph Papp and Stuart Vaughan decided to take their workshop productions of Julius Caesar and Taming of the Shrew outside to the masses, public theater as such had a very sketchy history in the United States. While the “Little Theater” movement of the 1920s certainly encouraged communities outside New York to develop their own American theater, much of that work accepted the inevitability of a commercial model for theater.

Joseph Papp believed differently. Whatever his artistic shortcomings, he held an essential and important belief that the masses should have theater, too, instead of it being solely a dilettante activity for the upper-class and middlebrow, and he believed that it was a civic duty to support such a theater. That belief remains the foundation of The Public Theater, which celebrates its 50th Anniversary this year.

In those fifty years, the idea has spread from the East River across the entire country. One can find free outdoor Shakespeare productions in every major city in the country. Seattle’s Freehold Theatre Lab under its Engaged Theatre aegis have been performing such productions since 2003. Along the way, they have also taken Shakespeare on the road, which Messrs. Papp and Vaughan also did with their Theatre Workshop shows. To up the ante they also perform not only for the public at large but also for people whose access to theater would otherwise be non-existent: inmates in detention centers, prisons and hospitals and military personnel stationed on base.

One can hardly fault the social mission. Clearly it resonates with many Seattleites. Freehold have received one of this year’s ten Mayor’s Arts Awards from the Mayor’s Office, so their mission appeals to people in positions of civic influence. It is a fair award for twenty-plus years of hard work and dedication to educating the community about theater. There really is nothing like Freehold anywhere else in town: their combination of studio, stage, classroom and laboratory workshop is quite distinct.

The Engaged Theatre group are well aware of the social responsibility they have as artists. They are also modest enough to accept that they may learn as much about art from their audiences as their audiences learn from them–perhaps even more. Freehold’s Robin Lynn Smith says, “We are privileged to perform for our extraordinary audiences and have been amazed by what we continue to learn about art, humanity, identity, existence, diversity, compassion, and community when we create theatre that breaks the mold.”

[/media-credit]
This year’s Engaged Theatre centerpiece is Shakespeare’s King Lear. The company will perform five shows for the general public in addition to visiting the prisons of Washington Corrections Center for Women, Monroe Correctional Center for Men and Echo Glen Children’s Center as well as the military personnel of the garrison at Joint Base Lewis-McChord and the folks at Harborview Medical Center. The cast and crew are exceptional, with the fine talents of actors Eric Ray Anderson, Christine Marie Brown, Anthony Pasqualini, Annette Toutonghi, Sarah Harlett and others supported by the live music accompaniment by Gino Yevdjevich, Beth Fleenor and Michael Owcharuk, movement and choreography by Jessica Jobaris, sets by Montana Tippett, lighting by Joshua Tillman, and puppets by Annett Mateo.

For an audience of inmates in a hospital or military base or prison center who might seem more inclined to appreciate an escapist fantasy like A Winter’s Tale or The Tempest or the grittier hyper-realism of Richard III or Macbeth, the choice of King Lear might seem strange. When asked why she chose King Lear for this year’s tour, director Robin Lynn Smith said:

I am inspired by the human struggle to know ourselves, and the attempt to look fiercely at the truth of our existence–framed by limits of isolation, separateness, bewilderment, blindness; and the limits of our time here: aging and death. And it’s a great story.

Ms. Smith definitely has the talent at her disposal to convince any skeptics. This is a promising production. One can only hope it lives up to the fullness of its promise.