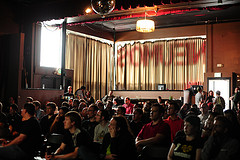 (I’m a writer preparing for a storytelling show in Tacoma, and have written about the process in a series. Here’s a link to the collected posts 1-6.)

I’m less than one week away from The Show That Must Go On.

The story’s in bullet points, with several events and analyses, and a takeaway insight. It’s about five pages, which is just about where it should be for 10 minutes. I need to assimilate it next, to internalize it somehow. I don’t get to have any notes with me for the show. I think that some of that commitment has to do with the body, so I’ll need to practice it over and over. I know what my next run will look like.

You can take a girl out of academia, but you can’t quite take the academia out of the girl. (That’s another way, incidentally, to describe my job loss.) So, I’ve been reflecting on what I’ve learned from this storytelling show process, so far; and I know there will be more after the show itself.

I’ve seen that being a good writer doesn’t automatically make you a good storyteller. And vice versa. In my first post, I talked about being a writer versus being a storyteller. Both professions share certain characteristics around narrative: a desire to communicate , a desire to connect, a desire to make meaning. At our last meeting,  Megan and I talked a bit about how writing is often considered superior to storytelling in some circles of our culture, which made me think about why that might be the case. I’ve definitely found a new respect for storytelling and its attendant skills.

I think of David Sedaris as a storyteller, which explains why I love recordings of his work and don’t own print copies of his written work. I know I’m probably in the minority here, but I would much, much rather listen to David Sedaris than read David Sedaris. For example, his story “Repeat After Me” is one of the best I’ve heard. There you can listen to him working beautifully with narrative devices and characterization and tone, waiting and building on the audience laughter. He’s drawing and creating a particular scene and a sound— and a silence. I don’t mean to say that he’s a bad writer; it’s just that I find more meaning and value when I listen to him tell his stories.

As a writer, learning to be a storyteller has meant that I work with my customary toolbox differently. I have to play carefully to the ear. (I have a new respect and understanding for my husband’s work as a composer, whose narrative work unfolds differently than mine in prose, on the page or on the screen.) I can’t assume that the listener’s ear remembers what a reader’s eye might remember. In fact, I need to play with memory even more strategically. Repetition is your friend when you are storytelling.

And I need to let go of the crutch: the page, the notes, the written word. By the same token, I need to let go of many of the writerly lines that have come up during the writing of the story. Some of the prose flourishes will disappear during the telling. I don’t want this to be a story that sounds as if I’m just reciting something I’ve memorized, verbatim. The good news is that if I’m able to trust the story enough–and myself–other flourishes and grace notes will appear. That’s the magic of good storytelling.

I look forward to the rewards of live storytelling: the rapport, the energy, the interaction with the audience, the adrenaline of collective energy. I hope that the storytelling will let me experience some of the best ways to experience community: through a deep and generous listening to each other.

Finally, I have delighted in the fact that storytelling can change the teller as much as the listener. By writing this series I know that’s been true for me, already. Thanks for reading this far, and for listening.

The first show in the Drunken Telegraph: From Pine Plank to Living Tree series is scheduled for 7PM on Tuesday, June 5th at Anthem Coffee in downtown Tacoma. The theme is “First Times.” Tickets are available, or you can bring $5 to the event.

Next week: series conclusion, after the show (and eventually, we hope to have a video link!)