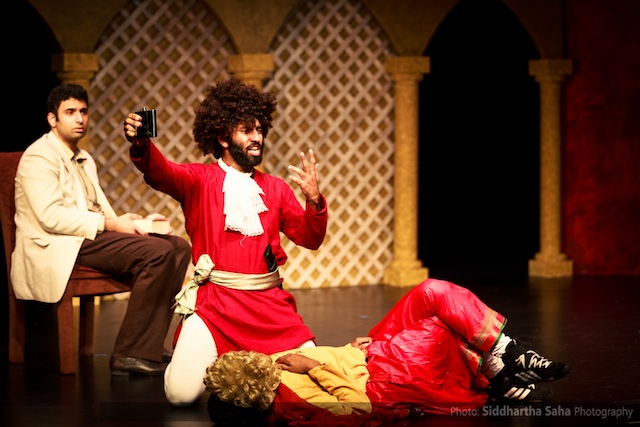 [/media-credit]
The death of most Shakespearean productions is complacency. The director “knows” what the play is about. The actors “know” how Shakespeare sounds. The audience “knows” what to expect. But what if they don’t? What if none of this is true? What if everyone involved has to discover a play for the first time?

It might seem an odd choice for an organization like Pratidhwani to undertake wrestling with Shakespeare. The stated mission of Pratidhwani is “the promotion and cultivation of the performing arts of the Indian subcontinent.” But there is another aspect to this. As the head of Pratidhwani’s drama wing Agastya Kohli told me, the goal is also to bring the rest of the world to Southeast Asia and ultimately to bring both worlds closer together.

The aim is noble enough. The problems are numerous but also obvious to solve. If one is going to bring the Euro-American theater to Southeast Asian audiences, at some point one will have to deal with the Euro-American theatrical canon. For whatever complaints one might make, much of that canon rests upon Shakespeare. In their attempt to bring both worlds closer together this time, Pratidhwani have decided not to take on a single Shakespeare play, but The Compleat Wrks of Wllm Shkspr (Abridged).

While many people think that producing Shakespeare requires extensive training in language and movement and stage combat et cetera, I happen not to share that belief. Technique is not unimportant, sure, but it is not fundamental. Very few productions of Shakespearean works are outstanding. What lifts them into the realm of outstanding is that the actors involved understand their material, commit to it and realize it. But even when the actors do not fully understand their material, a production can still reach the realm of the interesting and the lively. What matters most on this level is not that they completely understand, but that they are at least trying to understand and still commit to the process.

The Pratidhwani production is definitely in the class of interesting. The cast here are most certainly not masters of Elizabethan language or blank verse. They have sometimes a shallow understanding of certain things that are obvious even to a bright American high school sophomore. But this ignorance is often an advantage within this performance because it brings with it a total lack of complacency. Scenes that would normally be absolutely riddled with cliché suddenly reveal new insights, precisely because the cast are discovering the text for themselves and not relying upon cultural hand-me-downs. Their handling of Romeo and Juliet for instance is not done in the annoying sing-song declamation that audiences “expect” and which kills so much of theater. Rather they present it as a matter of fact, with a kind of deadpan comic tone. It is one of the few productions where the actors actually understand that “wherefore art thou Romeo” means why–probably because, unlike other actors who “know” Shakespeare, they had to bother to look it up and thereby refresh a cliché that more experienced actors would never have even considered.

The script by Adam Long, Daniel Singer and Jess Winfield offers the cast even more room in that it allows for improvisation by the actors. In the performance I saw there was not much. But the good thing about improvisation is that often it does not take much yet the slight amount of improvisation allows the entire scripted portion to breathe and to seem more spontaneous, which is exactly the strength of this production. Gurvinder Pal Singh and Ankur Gupta both delight in this spontaneity and freedom and this also seems to bring out the perfect foil from Bhushan Mehendale.

This freedom to explore also allows the actors to be legitimately funny. Instead of having to lean upon the easy solutions of exaggerating the Elizabethan crudity, the actors take advantage of their free reign to emphasize what speaks to them in the basic absurdity of situations in the script and in Shakespeare. Part of this is the script by Messrs. Long, Singer and Winfield, but much of it is the actors’ own work. The Titus Andronicus cooking show is a perfect example. Samuel Johnson writing about Shakespeare once noted that “His comedy pleases by the thoughts and the language and his tragedy for the greater part by incident and action.” Here the formula is reversed. While there is a sort of weakness in the language itself, the actors wring the most out of the incident and action.

While it is far from perfect, the Pratidhwani production of The Compleat Wrks of Wllm Shkspr (Abridged) is a full sight better than most productions of Shakespeare’s comedies themselves. Knowing their audience helps, certainly: the actors can assume that their audience is no more familiar with the source material than they are. Yet the audience members suspend their disbelief not out of ignorance but out of the basic desire to hear a story. The audience accepts on poetic faith anything said or done provided it is said and done honestly, without condescension. The conversational tone of this production that director Agastya Kohli has established is a perfect approach. It neither patronizes the audience nor alienates them but allows them to feel a part of the production and a part of the exploration, which is absolutely necessary for such an endeavor as this to work at all.

The Compleat Wrks of Wllm Shkspr (Abridged) is an honest exploration of its subject, not done with knowing, quasi-ironic wink wink nudge nudge in-jokes or by resorting to the most gutter level jokes on the premise the audience is too stupid to understand anything sophisticated. It is silly in the extreme, as it should be. But it is also respectful. If other companies approached their material with such a level of respect, there would be far less boredom in Seattle’s seats.