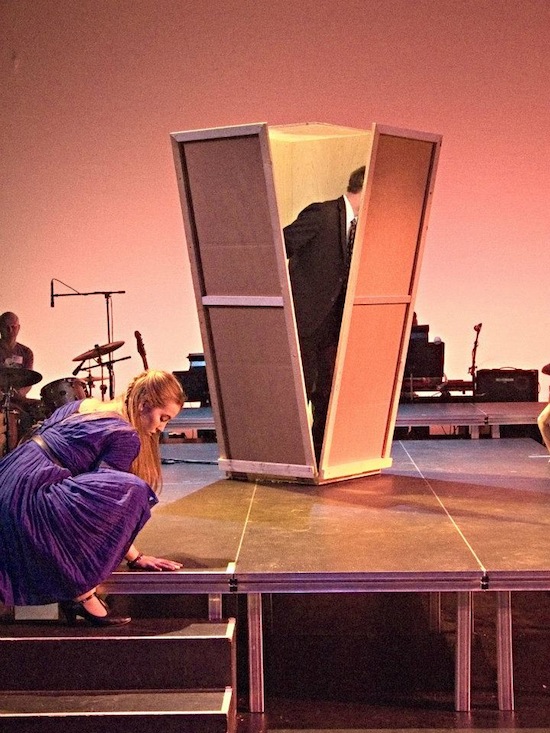 [/media-credit]My history with 14/48 far exceeds that of my writing career, as such, it is only fitting that I have written extensively about the fiercely local World’s Quickest Theater Festival, whether here at the Star, our old stomping grounds at the site that shan’t be named, or on 14/48’s own blog (too many entries to select just one). It could be said that 14/48 is in more than a few ways responsible for the publication you are now reading; which is only a small part of the reason both publisher/colleague Omar Willey and I have spent as much time writing about it as we have… Add to this the fact that I became the recipient of 14/48’s Mazen Award last Winter, an honor beyond compare with this set of artists, and this leaves me with not much to say objectively about the topic–at least for the moment. (By the way: congratulations to this Summer’s Mazen Award winner, Bret Fetzer.)

I suppose I could regale you with stories of glories and ignominies past–for example, how during my virgin weekend at ConWorks 2, I played a particularly needy and clingy dweeb to Alycia Delmore’s disaffected lust object in a Richard Lefebvre script on Friday, only to find myself sharing a virtual simultaneous orgasm with Sarah Rudinoff, while Geoffrey Gilbert and Tim Gouran enacted our cybersex session between us, in Jim Jewell’s script on Saturday. But this sort of navel gazing will only get the uninitiated so far in understanding the appeal of this madness for both the artist and the audience.

Instead, I will point you to the words of veteran playwrights Scotto Moore and Paul Mullin, who have some thoughts to share on the coming weekend’s extra-experimental format; you may also find more nuggets to enjoy on this weekend’s Facebook page. I’ll include some of my thoughts on the matter whilst recuperating from last Winter’s batch of weekends:

As great as [it] was [to win the Mazen]…it wasn’t the real reward of the weekend. No, for me[…]the rewards came in the various different ways the weekend’s artists pulled me into the worlds they were creating…The ways in which these artists impressed me are too numerous to list, instead I’ll just say that it was my joy to watch them work and the results of those labors.

The reason this work remains impressive after countless iterations is that the premise of the festival is to be as creative as possible in the face of limited resources and a daunting time crunch. There’s no time for dallying, and this forces the artists participating to figure out the quickest and best way to bring out the best of everyone and everything involved.

What makes this even greater is that, despite a natural tendency and desire to streamline as much of this as possible, 14/48’s Steering Committee keeps finding ways to raise the stakes. While the Winter festivals at ACT have become a showcase for all that is awesome about Seattle theater, the Summer fests are now the home of endless tinkering with the format, unafraid to risk failure in finding the various ways it could still succeed at presenting quality theater. Last Summer saw a “battle” of the sexes, as the weekends were split between the genders.

This Summer, 14/48 will experiment with two long talked about formats: An Outdoor festival (happening in September at the little amphitheater outside of Seattle Rep’s home at the Center), and this weekend’s Kamikaze Festival. Going into Thursday’s general meet-and-greet, none of the 50 invited artists will know whether they will be acting, writing, directing, designing or singing for the weekend. In other words, this weekend will truly be an artistic free-for-all, just as likely to fail as it will be to succeeed–either way, it will be glorious. Not least among the reasons why is because a group of artists have decided to simply trust each other and see where they land.

There are six and a half virgin writers this weekend, and six virgin directors. The actor pool is veteran-heavy (only one virgin; sixteen men, five women, if my calculations are correct), so they are charged with bringing it on home. I will be acting this weekend; the Star’s own Cole Hornaday is a virgin director. For updates, check out the 14/48 Blog–Angel Welter and Truman Buffet will be holding down the fort.

I am fortunate enough to not only witness this in action, I am also participating. At the time of this writing, the Thursday meeting is but ninety minutes away. On the Facebook page, artists are declaring their picks for this weekend’s recipient of the Mazen Award. By the time you read this on Friday morning, the group will be well on its way toward Friday evening’s performance.

If this isn’t enough incentive to get you to see any of the four shows coming this weekend, there really isn’t much that will move you.

Come see the magic of theater in action! Tell and bring friends. This shit is no joke. Victory or Defeat, we’re all swinging for the fences. You’re gonna plotz.