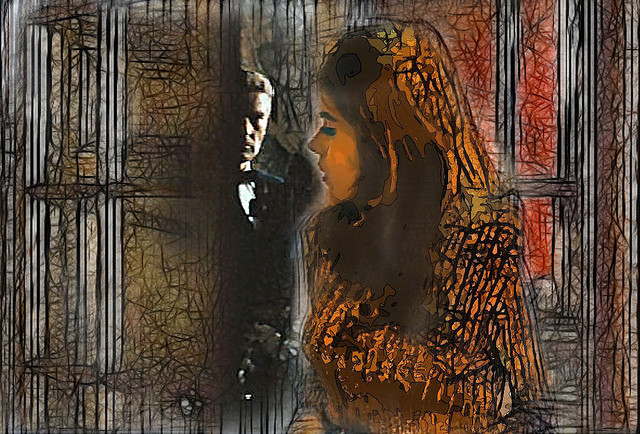 I mentioned in the Prelude to this guide a discussion called “The Future of Audio Drama,” featuring many luminaries of the new wave in audio drama and hosted by the noble Fred Greenhalgh of Final Rune. Minister of Chance executive producer Clare Eden was the only Brit among them. When asked what she thought the greatest obstacle to audio drama to be, Ms. Eden responded that it was people’s preconceptions of the medium.

We can say to somebody, “Come listen to this audio drama!” and the minute they hear “audio drama” you can sense their attention wandering. It’s still got a reputation as being very staid, conventional–I’m going to say “BBC”–where it’s all exposition, where there’s a narrator or someone who pops through the door and says, “Why are you carrying that tennis racquet? Are you about to play tennis?” And they think, “Oh, THAT rubbish.”

What Ms. Eden is talking about is classic tropes of audio drama that derive from a time when broadcasters believed that listeners who were only used to seeing plays on stage and film needed therefore every detail spelled out for them. These tropes quickly hardened into clichés.

So firmly do people identify these clichés as part and parcel of audio drama that it drives producers of audio drama to disown the entire term “radio,” leading to such absurdities as “sonic movie”–suggesting, of course, by the very that cinema is somehow inherently superior to audio, a belief I do not share. On the flip side, devotees of “old time radio” absolutely insist that such clichés be included in modern productions for purposes of veracity, so much so that contemporary productions include them as a matter of course.

What are these clichés that so divide the audio drama community? The list is long. Some of the most obvious are:

Naturally someone will chime in and say that these are not “clichés” but rather tropes. The difference is academic. The tropes of 1938 are the clichés of 1940–or, in this case, of 1960.

Timothy West’s play, This Gun That I Have in My Right Hand is Loaded, remains the most lucid essay on audio drama clichés I’ve heard. It’s not only extremely funny, it’s also quite comprehensive.

It is perhaps coincidence that Mr. West, an exquisite actor himself, wrote this play just as the BBC were entering a truly experimental stage marked by the founding of the Radiophonic Workshop, the productions of Donald MacWhinnie and Barbara Bray, and the imminent arrival of Martin Esslin as head of radio drama. At the same time, the main body of radio drama on BBC could be politely referred to as conservative.

A further quiddity of the time was that BBC television and the recently-launched ITV were becoming more popular than radio. Writers attracted to the “new” medium found themselves in heavy competition with other scripts. When their television scripts did not sell, many writers simply adapted them for radio without any effort to plumb the actual powers of the “old” medium.

It is this conceit that lies behind Mr. West’s script. Imagine, if you will, a thriller made for television, intended to resemble the crime dramas of the 1950s. In adapting such a story to radio, one would have to distinguish characters not by physical features or costume but by voice alone. Or, alternately, one could resort to foolish attempts to make everything visual.

CLIVE: I’ll have the one nearest the clock.

HAWKINS: Half a minute. There’s a bloke over there can’t take his eyes off you, Clive. Over in the corner, see him? Wearing a dark blue, single-breasted dinner jacket and tinted spectacles. A foreigner, or my name’s not…George Hawkins.

The piece is announced as “adapted for radio by H and Cynthia Old-Hardwicke-Box,” suggesting the roots of the parody. As the script lays bare the most cherished (and repeated) clichés of the British mystery drama on radio, the string of absurdities in the dialogue are rapid-fire and seemingly endless. But the parody doesn’t end there.

From the very opening of the piece, one can hear Mr. West’s wit at work–even before the play proper begins. The overly dramatic music that leads into the play is part of the parody as well. And then, reading the script, one hears this:

And all this to announce a husband returning home from work. The context makes the action risible.

The over-the-top and downright pointless use of sound so common in the medium gets the skewer even more in the play, especially in Mr. West’s hilarious staging directions.

CAR REVS UP, MOVES OFF, CROSSFADE TO CAR SLOWING DOWN ON GRAVEL PATH AND STOPPING. CAR DOOR BANGS EIGHT TIMES.

OPPENHEIMER: Ah, that is my sister playing.

Or, alterately, listen to the audio chaos:

The more one knows about the clichés of audio drama, the funnier the script becomes. The ending fight scene and the final denouement are a kind of burlesque version of the BBC thriller, featuring: trite fist fights (with hilarious sound effects), the civilian who magically knows how to operate a highly specialized piece of equipment, and (my favorite) the “clever” detective who solves the entire case on one completely tangential and irrelevant fact that is the mystery genre’s version of the deus ex machina.

For all the pure joy and delicious satire in the play, it hides a dagger beneath its cloak of laughter. As Samuel West, the son of the playwright and a fine actor himself noted in The Grauniad:

This Gun is still used in good drama schools to illustrate the pitfalls of the genre, but listening to the odd Afternoon Play, it’s possible to conclude that writers have taken it as a blueprint rather than a cautionary tale. Good radio writing is a real art. I think a good radio play is better than any other sort of play, but by the same token, a bad one is so much worse. Radio is the most unforgiving medium, more revealing of untruth than any other. Nothing distracts you from whether you believe the reality of what you are hearing.

The Strange Case of Charles Um… – B. Lee Kennedy

Unquestionably This Gun That I Have in My Right Hand is Loaded remains the definitive parody of radio drama clichés. Its clichés, however, are quite specific to the idiom of British radio drama. Is there an American equivalent?

In one sense, the answer is obviously no. American radio drama grew up in a commercial context, as a tool to sell lots of soap and other quaint products of the marketplace. There has never been any pretense to “Reithian values” of culture, society or any sort of betterment of the average American–except insofar as businesses believed that by selling Americans useless crap through advertising that the people became somehow better. In American radio drama, businessmen have always called the shots and these businessmen have always been notoriously humorless. Any satire on their business would have received condemnation at best and litigation more likely. There is no way such a satire would have seen the light of day or the amplitude of radio waves.

After the death of so-called OTR, however, American business consigned radio drama to commercial oblivion. Many works fell into the public domain. The clichés of radio then migrated into television, transforming there into the things recorded faithfully on TV Tropes. Many of the old shows, however, remained on shellac, so when in the 1970s and early 1980s radio became a hip thing again, companies trotted out cassette after cassette of “old time radio shows” from the bygone years–just the thing for a class of aging, nostalgic consumers.

As these shows became readily available, however, various artists began to take inspiration from the public domain works and through techniques of homage and réassemblage they created works of their own. The radio plays of Charles Borkhuis, for instance, owe immense debt to the classic tropes of American mystery radio, but no one would ever mistake them for anything resembling “OTR.” In Mr. Borkhuis’s homages the tropes are turned against themselves. The temporal structure of American “old time radio” narrative is recognizable, but the tropes within are strange. People speak in “tough guy talk” of the 1930s and 40s but voices overlap. The voice of the narrator speaking to other characters merge with the voice of the narrator’s own subconscious; external and internal sounds blend without warning.

In B. Lee Kennedy’s The Strange Case of Charles Um…, the idea works in reverse. The tropes are instantly recognizable, but the temporal structure is strange. The piece uses no original sound at all. It is a completely “found sound” piece. Similar in ethos to the “found footage” cinema of the avant-garde filmmaker, The Strange Case of Charles Um… reimagines the clichés by cutting and pasting them together into a new form, until the entire piece becomes an essay in laying bare the tropes of of American “old time radio.”

With a more serious artist, such a piece might turn into a tendentious analysis, worthy of the the most humorless déconstructeur. Fortunately, Mr. Kennedy is not that artist. This piece aims at pure amusement. It is also incredibly funny.

From the straightforward re-editing of dialogue into ludicrous pronouncements —

to pastiche bordering on the density of musique concrète;

from glib pokes at the hyperdramatic tones of radio drama —

Mr. Kennedy uses réassemblage editing to create a remarkable and hilarious study of the “sound” of “old time radio” that so captivates legions of fanboys to this very day. As comments on his piece have noted, OTR purists will probably hate it. But who cares? OTR purists are sanctimonious, territorial, foolish and mostly a bunch of old males more interested in a good ol’ boys club than in the actual art of audio drama. That many would take offense to a delightful, affectionate satire like Mr. Kennedy’s is, I think, is a sure sign that the parody has hit its mark. Americans hate satire, particularly when they are the targets, and even more particularly when that satire comes from a member of an elite group of nerds who critiques the sacred cows of the nerdy. Yet American OTR purists need exactly this sort of satire to keep them honest. Those who are not purists need it just as much, to remind themselves that intriguing things may still be done with radio dramas if one reserves an open mind.

The Strange Case of Charles Um… is for me the most definitive exploration of mystery radio clichés I’ve heard. American audio drama remains fascinated with the mystery genre and, as Samuel West notes in regards to English audio drama, many such dramas today seem to take the clichés as a template rather than a caution. The Strange Case of Charles Um… deftly avoids those clichés by putting them up against the wall.

As one listens to the piece, it may well sound odd at first. The devices in the play make the work tend not backward toward “old time radio” and its drunken nostalgia but rather in a much different direction: toward music. Quite unusual among Americans (Gregory Whitehead being the major exception), this modus operandi is common in Continental Europe, especially Germany. Next episode of The Ghastly Impermanence, I will explore that phenomenon known to the world by its German name: Hörspiel.