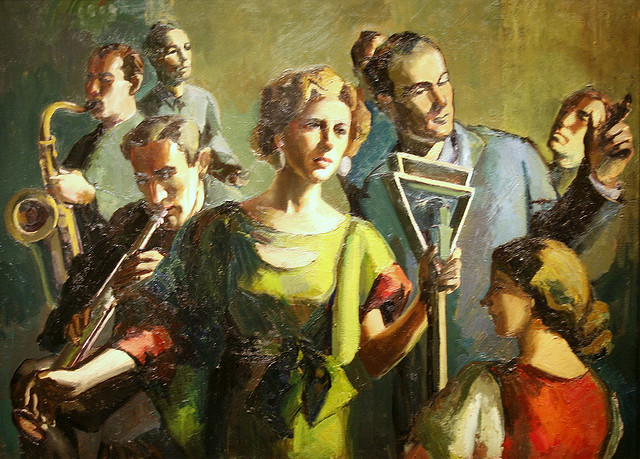 I listened to Fred Greenhalgh’s round table discussion, “The Future of Audio Drama” (also available on Mr. Greenhalgh’s own excellent podcast, Radio Drama Revival) with great interest. With a group of Parsec Award Finalists including Clare Eden, Christof Laputka, Monique Boudreau, Joel Metzger, and KC Wayland, I got what I expected but even better.

All involved agreed there were two great obstacles to the spread of audio drama. The first was the lack of a central location where people can find audio drama–an audio drama library, so to speak, that would function something like the Open Library does with books, only more orderly. The comparison to Audible.com was telling. Where there are numerous booksellers that sell “Books on Tape” there is no such similar number of places that sell or even simply store audio drama. While Moonlight Audio Theater, The Sonic Society and Mr. Greenhalgh’s own Radio Drama Revival comb the world for interesting work, they are internet-based podcasts that share the same problems of any small corner of the internet. They are difficult to find in the morass of irrelevance on the Web. They are also buried in a non-hierarchical system quite unlike a library or store, and this system in general makes it extremely hard to find things that belong in groups of relevance. I have argued this before but it pleased me to know others have similar ideas.

The other great obstacle to a wider appreciation is what my last column was about: unadulterated prejudice. Audiences actual and potential have useless stereotypes what “audio drama” means. For Americans this means fuzzy old recordings, declaimed dialogue through insensitive microphones, and hidebound notions of genre. But this is not a problem exclusive to the USA. Clare Eden stated plainly that the problem is just as great in the UK.

Ms. Eden’s comment about working against people’s cliches of radio drama are similar to American producers’ laments. The cultural clichés she notes are different. But they’re still clichés.

At this point, the conversation took a turn toward semantics. Monique Boudreau began to distinguish between audio drama and radio drama, suggesting something quite strange: no one really understands radio drama and so it is more sensible to take models from film and theater and podcasts.

Radio drama is anachronistic. One of the things we’re trying to do is use this as a new storytelling medium… We have stop relying on everyone’s memory of something that no one understands.

This is a bizarre argument. Despite the fact that this remark is off the cuff (I am certain Ms. Boudreau would phrase it more articulately in print), it reveals a deep-seated problem in the modern attitude toward the medium. Modelling audio drama after film and theater is not a way forward. It is a dead end. At worst it is a way backward because it assumes the inferiority of the medium’s already rich history, and suggests that audio drama can improve if only it adopts the techniques and contents of those other “new” media, or even more dimly that audio drama is simply an ancillary marketing tool and that the “successful” media of film and television and theater are the real goal.

I happen to believe the opposite. What will make audio drama a “new” storytelling medium is not pillaging other media but combing the history of audio drama itself–not looking for stories that are successful in other media, but rather for the stories that can only be told in audio. Preaching ignorance of the things that have already been done in the medium simply because “no one understands them” is a poor way to whitewash the matter. The artists of the future who will do outstanding work in audio drama will do it because it is audio drama, not because they are simply idling away time waiting for a movie contract or a stage adaptation, because, well, you know, that’s where the money and status is and stuff.

Beneath this, too, is Ye Olde Semanticke Arguement. Calling something by a newly-manufactured name instantly raises its status. Call radio drama by the new name “audio drama” and–poof! Instant audience! Dance is no longer “modern dance,” it’s now “movement.” Theater will sell better if it is called “performance art.” But this is carnival barking. All this has been tried. All this has failed.

Perceptions change with experience and through emotion. That emotion is buried within the words. Audiences carry around in their memories emotional connections to “radio drama” that are extremely powerful and, if one is a person who uses phrases like “OTR” and “Golden Age of Radio” (in capital letters), extremely positive. Unfortunately if one is not such a person–and I am not–the emotion is generally closer to tedium, frustration or anger, but no less powerful for that. Renaming the thing that causes that reaction “audio drama” or “sonic movie” or “movie in audio” does not affect the emotional reaction. Calling eggplants aubergines makes them no less bitter and purple and is not likely to make children eat them. The only thing that changes the reaction is more experience with eggplants.

This sounds academic. To some degree it is. But I feel I must point out the folly, so I provide you with an example. For decades in the United States “radio drama” meant–well, largely boring, largely generic rubbish spoken through bad microphones and listened to on worse receivers. It also meant text-based, speech-centered theater that relied upon the tropes of whatever else was around it in its sonic environment: movie trailers, news broadcasts, soap commercials, educational programming. Those tropes were carried along as part of the package as “the essence of radio drama” until television came along and proved that all of those tropes were not an essential part of radio at all but could be used within the new technology as well.

What killed this “radio drama” in the United States was its insistence on staying mired in formulas the new medium could adopt and refine in a way superior to radio. One need not be too much of a McLuhan follower to know that anytime a new technology comes along and fills the exact same function as an old technology, the old technology loses. Thus television offered the bonus of vision to the formulas of so-called “radio drama” (and to commercials, newsflashes and educational programming as well).

Yet at the same time in various workshops across the world playwrights, musicians, poets, producers and even some dilettantes began creating works that could only possibly have been done in a purely audio medium. That much of this work was done with musicians rather than with playwrights led it to be considered not as a branch of radio drama but as a branch of music. Since the 1960s it has not been called “radio drama” but “acoustical art” or worse, by its German name, “Hörspiel.” The result has been that such works by Peter Handke, Alvin Curran, Heiner Goebbels or John Cage have been classified as “music” rather than as “radio drama” even though they were commissioned explicitly for radio broadcast. For all that, most of these pieces remain completely obscure, even among scholars of both radio drama and music. Changing the marketing label did not help them gain acceptance in the world at large; it merely relegated them to another ghetto. Worse, it destroyed the story of a continuum of experiment within “radio drama” that artists within the field of “audio drama” would do well to embrace rather than to diminish.

So here we are now, stuck with the term “audio drama.” I accept the term logically on one level: most of it never sees a radio broadcast in any traditional sense. Yet to disown “radio drama” as though it is simply stuffy narration, bad microphones, brainless exposition ignores the reality that “radio drama” was always as experimental in the past as “audio drama” now is. Given most “audio drama” producers’ penchant for insisting on even more genre fiction stories that would just as easily be told on SyFy or CW, I would argue “radio drama” has been and continues to be far more experimental.

No matter what one calls it, however, the problems remain the same. Most producers in the medium do not have a sufficient body of work. Others that do have problems of accessibility. Listeners need consistent work in the medium that is readily accessible according to their personal interests. For instance, I want drama, produced in the United States with non-amateur casts performing newly commissioned work that is neither generic nor simply stage theater transposed to audio. It would be great, too, if that drama also featured experimental work regularly. Where is my podcast? Give me a list of two dozen that have more than ten hours of material. I want the list by sundown.

Organization and coordination of all the relevant material on the internet is a challenge, no less possible than organizing the Library of Congress. Producers of audio drama seem sensitive to this and I am certainly waiting to see that problem solved. I can only help a little on the technological side of things, as it is not my métier. My métier is, however, combatting the ludicrous prejudices people have about audio drama–especially the prejudices of the audio dramatists themselves.

I believe this requires a legitimate history of the medium, a survey of all that is possible within it, with some representative examples. This history need not be linear. What it need be is non-academic and eclectic. It needs to be divergent in its tastes and catholic in its interests. It needs to give a person with a deep interest in the medium an inexhastible resource for further explorations. It need give a person who has only a passing interest in the field a gateway–or perhaps a rabbit hole–through which they may find their interest not only rewarded but intensified.

The goal of this column over the next few months is to begin writing that history.