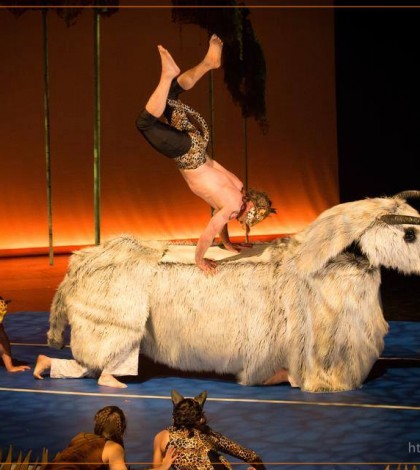 There is darkness and silence. Then light, in waves, rippling through the ether. Three angels hover over the void. The light seems to reach upward, to form into tendrils that reach toward the watchers and draw them down. The whole mood is one of suspense, mystery, awe.

And then there are drums.

Taiko drums. Raw. Primal. Live. One can feel the beat against one’s breastbone, all the way through the body. Trees descend from above. Leopard people emerge from the shadows. Then there is the howl of a beast–and the hunt begins. Each move of the leopard people is a pounce, defying gravity and the force of nature. It is spectacular, in the the truest sense, uniting the primal power of the human body in motion with the spirit of ancient ritual.

This is the specialty of The Cabiri. After the New Age fads of the 1980s and 90s, myth has largely disappeared from the American mainstream, and where it exists at all it tends to be as a vague set of vague notions, couched in boring language. The goal of The Cabiri has always been to brush the rust away from primeval tales and bring them into the physical world as immediate experience: not something to talk about abstractly, but something to live, and live through.

Over the years they have invoked many deities, many legends, many figures from Balkan folklore to Hittite/Hurrian myth. In Tewaz they have taken on a much more familiar theme. This time, it’s the story of the angels.

Yet this is not the story of the angels that is vaguely felt, that old story where the angels are warm, fuzzy creatures who watch over people and make sure that everything is just peachy for each of us because, you know, the omniscient, omnipresent JHVH-1 couldn’t do it himself etc. In Tewaz the angels do indeed watch over humanity, but they are far from warm and fuzzy, things are not just peachy and, in fact, they probably have an agenda of their own that may result in the doom of all things mortal.

One group of angels, the Watchers, decide that it is time for humankind to move beyond their primitive state. They descend to earth to bring the wisdom of heaven, teaching them love and poetry, to control their violence and to commune with the divine.

This comes at a price.

In return for the gift of knowledge, the angels take a woman from the human tribe. The archangel Michael impregnates her, bringing down the wrath of archangel Gabriel. Gabriel warns the Watchers that the half-breed will bring war and strife and destruction. The child must be destroyed. The Watchers refuse. Tewaz, the lead Watcher (played gracefully by Charly McCreary), offers another vision of the future: a vision of a Messiah who will bring eternal peace finally to humanity.

But Gabriel will none of it. A struggle breaks out between the archangels and the Watchers, and if you’ve read the Book of Enoch, you will know what happens next.

Much of the Cabiri source material comes from highly acclaimed authors who specialize in comparative religion and myth. This is no exception. There is, of course, the Holy Bible itself, or at least the Ethiopian Orthodox version. For those of you who are interested, The Old Testament Psuedepigrapha edited by James Charlesworth is a good start. (If you’re cheap, as I am, the Book of Enoch is online at Sacred-Texts and is a pretty good start.)

In truth, though, while knowing the source material may add to the experience, not knowing the source material does not detract from the experience. This is a visceral show. When leopard people begin hurtling themselves acrobatically over six foot high animals while hunter’s drums pound through auditorium, I highly doubt anyone will be pondering the trifunctional hypothesis or wondering whether the proper translation of the Ge’ez language word is “similitudes” or “parables.”

I’ve already mentioned the show is visceral. It is also rich. Images flow fast throughout. A single viewing is probably insufficient to catch everything–but then, why should it be? Why should an audience only wish to see something once, and having seen it once, smugly pat themselves on the back for “getting it all”? Why is it unreasonable for artists to ask audiences to return to their work, and continue to find new things and have deeper experiences?

Tewaz has a lot going on but it should. It’s not just a story, but a history. Otherwise it wouldn’t be in three parts. The Cabiri pull out all the stops for this one, and it deserves it. This is one of the most spectacular things to visit a Seattle stage.