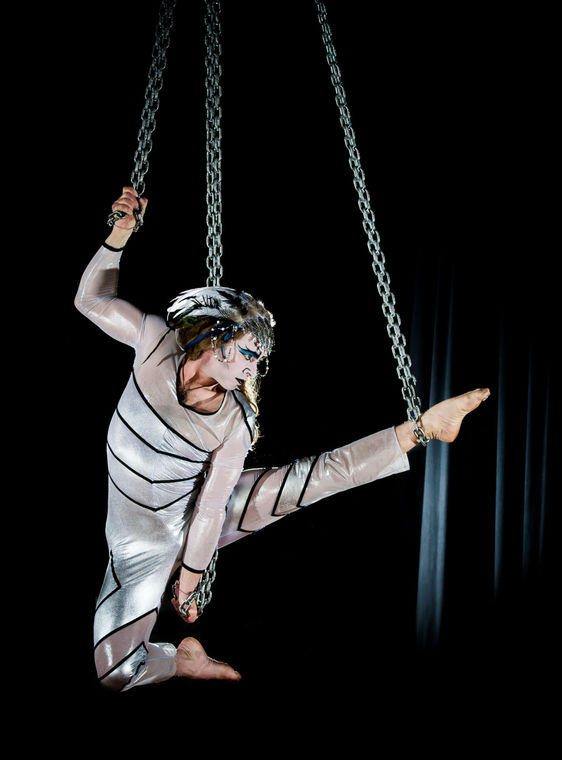 Last year when I reviewed the first part of The Cabiri’s TEA trilogy, Tewaz, I wrote that their specialty is “to brush the rust away from primeval tales and bring them into the physical world as immediate experience: not something to talk about abstractly, but something to live, and live through.”

There is another, somewhat more subtle current to their work, too. It involves looking at the world in which they live and finding where the world has become disconnected from its ancient myths, and reconnecting them. In an increasingly skeptical society, this is not easy but it is necessary. In contemporary America, the mass culture places a great emphasis on protracted adolescence, and one of the salient traits of adolescence is that adolescence believes that history begins at one’s own birth, that everything is happening for the first time. The purpose of myth is to remind us that it isn’t. Everything human and divine has been around a long, long time. To understand the past is to gain a deeper insight into that present.

When John Murphy, artistic director of The Cabiri, traveled last year to Iraqi Kurdistan, that present was a catastrophe. Under the boot of the Daesh in Northern Iraq, a “forced conversion campaign” had begun with abductions of Yezidi women and children, and massacres of at least 5,000 Yezidi civilians. The news came to America with a sort of shrug of horror, another quiddity in the growing tapestry of suffering in the Middle East. What few knew and the press failed to mention is that the conflict is part of a 700-year attempt to extirpate the Yezidi. Saddam Hussein had done the same before Daesh, and the Ottomans before him, on back to the Persians. There have been seventy-two major attacks on the Yezidi over the years. What those attacks most sought was to erase all connection of Islamic Iraq to its primordial past, to “purify” the land of all traces of anyone and anything that had existed before Islam came to town. What they aimed, and still aim to destroy is not just human lives, but history itself. Destroying that history means to erase the oldest surviving religion on earth, all its people, and all its wisdom along with it.

Mr. Murphy decided that wisdom needed to be kept alive. To help preserve that history he volunteered himself and dropped right into the war zone near Sinjar for three months. During that time he lived beside Yezidi citizens, listening to their stories (some of which he published here at The Seattle Star), bringing them supplies, easing their struggle in whatever way he could. In a war zone, however, there is still only just so much any one person can do, so he returned to the United States to make sure that the Yezidi history and myths would be preserved in art.

This is the background for the second part of The Cabiri’s TEA trilogy, Ezid, opening Friday the 12th at the Cornish Playhouse. In typically Cabiri style, Ezid has multiple meanings: it is often associated with the peacock angel, the first angel of the Heptad, and the one who does not bow. But it’s also contained in the name of the Yezidi themselves, and, if I recall my Pahlavi correctly (it’s been awhile), it means essentially “worthy of worship” and often stands in for a generic angel.

Throughout the piece, these meanings play against each other. The Peacock Angel, whom the Kurds call Tawusê Melek‎, is admired for his independence by Yezidi people just as much as he is reviled by Muslim people for his similarity to Shaitan and his refusal to bow to Adam. Angels are not what they seem. Nor are humans. Nor are demons. Characters one might have found icy and brutal turn out to have the best interests of the universe at heart, and characters who seemed lovable turn out to be self-centered and destructive. This theme runs throughout Tewaz and, I suspect, the third part of the trilogy too. Being the middle of a trilogy, this show promises to be dip down into the darkness as it begins back toward the final light in part three.

All the while you have The Cabiri doing what they do best, telling their epic stories through dance, gymnastics, and acro/aerobatics. This time around they have enlisted the excellent Cyrus Khambatta for choreography, along with the 20-year veteran of Cirque du Soleil, Marshall Garfield, along with the renowned Sam Alvarez. The usual suspects are there, too. Managing Director of The Cabiri Charly McCreary heads up the dance corps with the lovely Erica Sherman and the dynamic Jody Poth, with eerie live music from Count Constantin.

It promises to be an intriguing evening. I found Tewaz one of the most spectacular things I have seen in Seattle, full of primal power and striking imagery. Certainly it was the finest thing I’ve seen The Cabiri do. I have high hopes Ezid will build on that base, and introduce some new themes as well. Given its deep affiliation with the Yezidi and their recent sufferings, it will be interesting to see if Mr. Murphy and his troupe can recover some hope from the seemingly eternal darkness. But, as myth teaches, even darkness is not eternal. It is easy to forget that when things seem at their darkest as they often do these days–which is all the more reason to connect with the ancient wisdom and remind ourselves it is not.