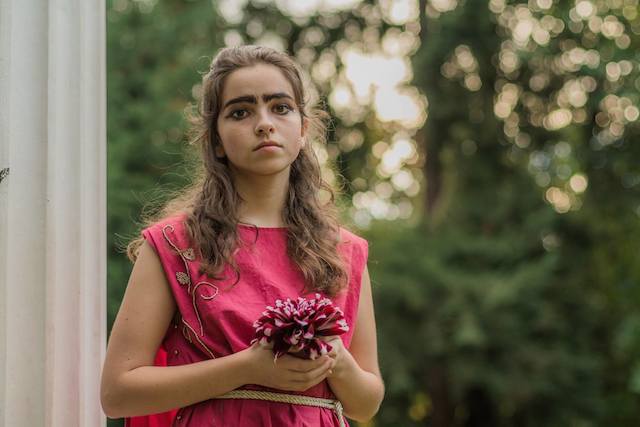 Gary Corseri recently reminded me of a legend about Sophocles from Cicero’s On Old Age. In his 90s, his much younger and greedier sons tried to assume control over all of the old man’s wealth. They argued before the court that because he was in his 90s, his memory was giving out and he had become senile. Thus the playwright was incompetent to manage his affairs and they asked for control over the estate. When the court asked Sophocles to respond about whether his memory had begun to fail, he began to recite lines from every play he had written, including his latest, Oedipus at Colonus, with perfect recall and a bit of thespian skill as well.

The case was dismissed, of course.

I bring this up not only because I love Sophocles and because it’s a marvelous tale but also because the story reveals one of the playwright’s greatest qualities–namely, his incredible attention to details. Every poetic turn of phrase, every ironic comment, every description of a person or object has a purpose: to lead the audience to the inexorable denouement.

It’s a formidable challenge to shape it all correctly. The shape of the Undergraduate Theater Society’s production of Sophocles’ Electra (adapted by Frank McGuinness) is surprisingly strong, but the details are still a little rough. Director Rachel Perlot’s overall conception is sensible enough: strip away everything extraneous, connect the bloodshed of Greek tragedy visually with the contemporary horror film, and make people wonder if Electra is an avenging angel or a complete nutjob. This in many ways is completely traditional. The director is also blessed with a rather good cast. The problems come in striking just the right tone at the right time within the text.

Whatever my misgivings about Frank McGuinness’s translation, it does give the cast and director clues on how to handle the text. There are, essentially, four different levels within the play. There is the purely informational speech, which is extremely rare in the piece. The other three are more difficult to extract, but for purposes of discussion I like to call them oration, orison, and oratorio. Oration text is poetic, argumentative, approbatory, accusatory–in other words, “heightened speech.” Orison is prayer: ritualistic, solemn, meant to invoke the gods. And oratorio is, of course, music but music on an operatic level, music which one must sing.

Ms. Perlot understands the level of oration well enough. But the other levels are less clear. Electra’s entrance, for instance, offers an example.

The repetition here is a stone-cold clue that this is an orison. There is the invocation–divine light being another phrase for the god Apollo–and then there is the prayer at the close:

But what’s in the middle? It’s difficult to say. Given:

My mother’s hands turned red
with his blood. Adulteress,
Adulterer, she and Aegisthus,
split him open with an axe.

This could purely informational or this could be oratory, but it’s certainly not the orison which starts and ends the speech. I’m not suggesting there is one interpretation. But the director has to choose one way or the other. I’m not sure Ms. Perlot ever does choose. It’s not completely down to the actors, because this same mix of levels recurs throughout the play enough to be a structural element.

Then there are times where I really, really wish the play would elevate to the level of oratorio. There is a moment after the messenger delivers the word that Orestes is dead where Electra and Chorus lament together. The actors here do a fine job of listening to each other as they trade off not just words but also sounds and gestures. It’s inspired and beautiful and evocative. And I wish they’d go just that much further, all the way into pure music. On the night I saw the production the actors seemed to be holding back, as though they could sense where they wanted to go but couldn’t get there. I’m hoping by now they’ve pulled out the stops.

I think this is a cast that can do it.

Last I saw Elex Hill was as a tour guide in Harlequin‘s production of Middletown. Though she was surrounded by an excellent cast and struck me as perfectly capable, that role didn’t give her a whole lot to do. With her portrayal of Electra I can see a little more what kind of an actor she is. She is an emotionally explosive actor with some sharp edges and she tries to do more with less. She makes a very good Electra that, with some clarity of direction, could be truly powerful.

I’ve been watching Emma Broback for a couple of years now, too. She’s always had a lovely voice and she handles prose text well even in a play like N3RD, which was just a bit too twee for me. This time out I was impressed highly by the way she moves. While the rest of the cast are much more naturalistic with their movements, Ms. Broback has stylized her movements to a high degree. I appreciated this interpretation; it gives her role as the chorus a distinct and discrete part in the drama where she is partly in, partly of, and yet largely outside the production, which I think is an excellent approach for the Sophoclesian chorus who seem at times to be conservative roadblocks and at others to be absolutely sympathetic allies. Shifting back and forth between these functions as effortlessly as Ms. Broback does is admirable, and anchors the other actors around her.

Ai Nguyen’s performance reminds me a little of Coleridge’s quote that watching Kean perform was like reading Shakespeare by flashes of lightning. With Ms. Nguyen it’s a little more like watching a flickering fluorescent bulb. No one will doubt her beauty or her stage presence. When she enters she absolutely commands the stage. She has a good voice, a subtle voice, but then her Clytemnestra could whisper half of her performance and she would still control the drama. The flickering feeling, I think, comes back to the essential problem of not deciding what level of speech the play is on at various points.

For me, Clytemnestra is a desperate woman, rather than a wicked one. Like every character in the house of Atreus (both by blood and by location), she is caught in what Richmond Lattimore called a cycle of “murder committed not against an external enemy, but against a part of the self.” True, she has killed her husband. More importantly, she has killed a king. Yet she has very sound reasons (I hesitate to say “good”) to demand blood justice for her husband’s killing of their own daughter–her husband, after all, is not her blood; her daughter is. So what is the function of her dialogue with Electra? Is it purely informative? Is it poetic pleading and thus oratory? And if it’s oration, why is she trying to convince her daughter, and of what? Does she want Electra’s love and acceptance, or merely her silence?

This is extremely difficult to answer within the production. Ms. Nguyen seems to alternate between fear of Electra (and by proxy of Orestes) and a sort of smug inviolability. Both of these make sense and are definitely present in the text. What’s missing is genuine love and tenderness. It comes out in flashes, like lightning, but its purpose is just as mysterious as nature. When Clytemnestra hears of Orestes’ death, she is relieved–understandably–but I think she also needs to be maternal in a very particular way toward Electra, telling her effectively, “Look, your revenge fantasy is over. Now can we be a family again?” Ms. Nguyen handles the first half of that mixed emotion quite well. The second half of that emotion sometimes goes begging. Again, I think some of this is down to Ms. Perlot and some to my having seen the piece early in the run. It may work itself out. I certainly hope so.

As it stood on the night I saw it, the ending of the play was a bit of a muddle. In the director’s defense, it’s an extremely enigmatic ending. In The Libation Bearers by Aeschylus, which is essentially the same story, the play ends with Orestes being chased by the Furies. The cycle of blood is not yet at an end. In Sophocles’ version the action stops with Aegisthus entering the house for the last time. The question then is: Has the cycle of blood ended, according to Sophocles? Or, more importantly, to Ms. Perlot? I don’t have an answer to this. I don’t think Ms. Perlot does either. Yet a successful production hinges on this.

I’ve seen the play probably a dozen times in my life and I’ve seen a dozen different things tried. In the London production I saw the sound design went completely silent as Orestes and Aegisthus went into the house, then became very dark and ominous. Decision: clearly not the end of the blood cycle. I’ve also seen the entire cast except for Orestes and Aegisthus surround the body of Clytemnestra, led by Electra, weeping. Decision: clearly the end. Both were effective. Both answered the question. I should like Ms. Perlot to answer the question with similar effect.

I do not intend to diminish Ms. Perlot’s efforts. She’s blessed with a fine cast and herself obviously has an excellent eye for balancing the action and extending the stage non-traditionally. She also has a fine crew of designers, especially Isabel Martin, whose costumes are excellent symbolically as well as functionally. I’m delighted, in fact, that it’s as good as it is, but I think with this collection of talent she could do even better. I am well aware Sophocles hasn’t given her anything explicit to work with where it would most. For that reason, everyone has to work just that much harder. Electra contains a couple of the finest female roles in the history of drama, but it’s an exceedingly difficult play to contextualize for a modern audience. The entire Greek idea of justice as both human and divine are largely alien on the contemporary stage. The language is difficult. It takes a Herculean (Sophoclean?) effort to pull it all together. Give Ms. Perlot and her cast some time and it may happen yet.