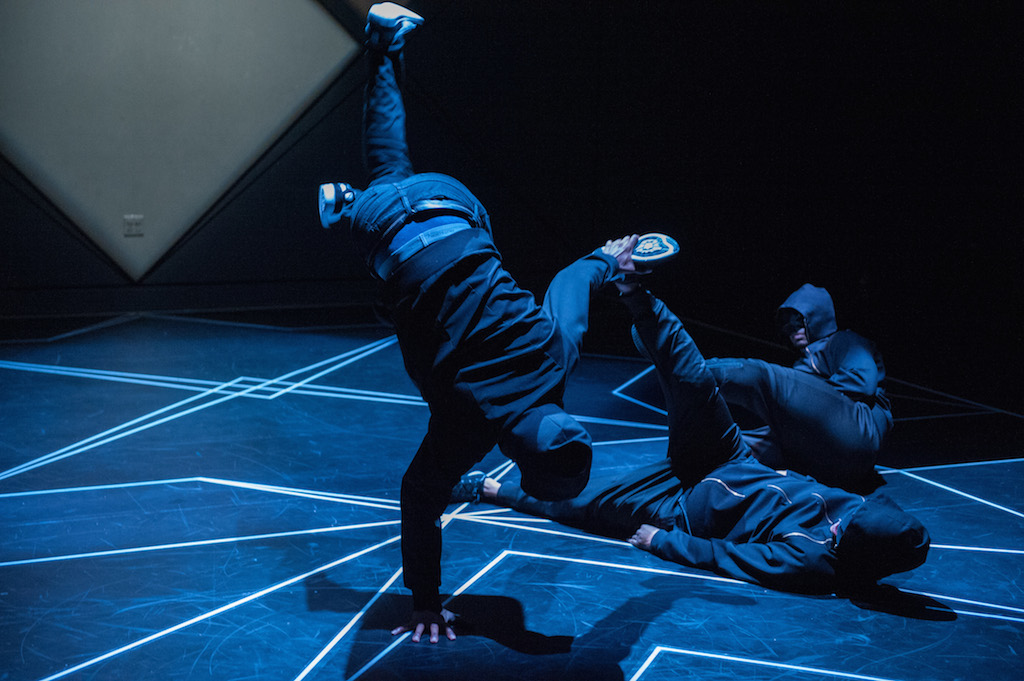 When Amy O’Neal asked me to come down to Portland with her and introduce her work for Portland Institute of Contemporary Art’s TBA Festival, I was a little taken aback. It’s true I’ve seen a lot of her work over the past ten years. But I don’t consider myself much of an expert on that thing people call “modern dance” by any means. What could I possibly say?

Ms. O’Neal wasn’t having it. She made it plain to me, in no uncertain terms, that I was the only logical choice, and there was no way I was going to wriggle out of it.

It’s impossible to refuse her, anyway. Her eyes look straight through me, and she gets a little wrinkle at the right corner of her mouth when she listens to my protestations–and if you’ve ever been on the receiving end of one of those glances, you know it’s best just to say yes to whatever she says next.

After working out some details with the people-people at PICA, I booked my ticket and headed south on the Mt. Jefferson Cascades train. On the trip down I put on my headphones to listen to German Hörspiele and go over my notes. The talk would be easy enough, I figured. I’d got word from Ms. O’Neal that the whole crew of dancers would be there, or at least enough to do what I planned. Which, quite simply, was exactly what no one else had bothered to do.

I’ve read a lot of people’s words about Ms. O’Neal as part of Locust and Amy O/tinyrage over the years. Most of it is what I expect from dance writers: colorful epithets, however intellectually ridiculous they are; untempered appreciation for her “powerful” movements, a word that recurs over and over again; and an obsession with her biographical details, the likes of which will not be mentioned here because I hate that nonsense.

Something changed, however, when Ms. O’Neal finally debuted her piece, The Most Innovative, Daring, and Original Piece of Dance/Performance You Will See This Decade. Writers dealing with her work before that almost never dealt with the street influence on her work. They’d mention it, then get back to what they’re comfortable talking about. Then along came a piece where it’s impossible to ignore the street element–or at least, one would think so, in a piece that actually interviews people on the street about rumprolling and its variations, and quotes visually from Ciara and others.

Most reviewers mentioned the “hip-hop” elements (even if they are convinced that Janet Jackson is hip-hop) but it was clear that none of them understood hip-hop. One anonymous commenter on a review in fact mentioned a certain amount of disgust that the reviewer had ignored the tradition of hip-hop completely and that it’s a completely different world from modern dance. And as happens in the world controlled by modern dance aficionados and pundits, he was quickly corrected for his spelling and grammar.

That thought remained in my mind the entire trip.

I’d written about Ms. O’Neal’s piece, Opposing Forces, before, in a previous version. I was curious to see what she’d done with it, which is why I’d set out early, to drop in on a dress rehearsal. Things were running incredibly late, but it gave me a chance to see what the show was really like, all slowed down so I could be analytical.

During the break I asked Ms. O’Neal what she’d like to talk about at the discussion tomorrow by asking her first what she didn’t want to talk about. This surprised her. And then I suggested a different approach completely.

“How about I have you talk only briefly, and let the boys do most of the talking?”

I saw another wrinkle at the corners of her mouth again. A little different, this was that guarded smile I also know quite well, where a little devious calculation is going on in the O’Neal grayware. Here, a good thing–and I knew all was well.

The next morning I met with the lovely Roya Amirsoleymani, PICA’s Communty Engagement Manager, and fellow lover of Persian desserts. Things were a little crazy with my whirlwind schedule and hers only occasionally overlapping long enough to get business done. We finally had a chance and so we went over what I had written down for my lesson plan for the workshop later that day.

Then it was time for the talk.

It started as a bit of chaos, with Oregon Public Broadcasting putting microphones on us and testing sound, but all the dancers were taking it in stride. I had all my questions written out on paper. It was my opportunity to play Dick Cavett, so I availed myself of it, taking it all in stride.

As the audience sat down, I noticed a rather wide age range–and, hey, even a handful of brown people. Always nice to see.

Ms. Amirsoleymani opened the talk. She introduced all of us: Brysen Angeles, Fever One, Michael O’Neal, Free Vergara, Mozes Lateef, Amy O, and me. WD4D hadn’t shown up yet–a fact which I would use later to embarrass him in the friendliest possible way. And then it became my turn.

I asked Ms. O’Neal two “big questions” just to get her started. After that I turned to the dancers, back and forth between Free, Fever One, Teef and Brysen (saving Michael for later). For the most part, I left Ms. O’Neal to hover in the background, occasionally to fill in some gaps or make a connection. Mainly the talk was about the dancers themselves. Some of it silly–“What’s your favorite Bruce Lee film?–and some of it biographical. We talked about originality and biting, something important to note in a sampling culture which was, of course, one of the main themes of The Most Innovative, Daring and Original Work of Dance/Performance You Will See This Decade.

Behind all of the questions lay a subtle premise: these are men, with families, with ideas, with artistic passion. My goal was to prove this point without raising it explicitly.

So when I opened up the floor for questions, I was pleasantly surprised how truly curious the people asking them were. Some of them talked about culture, some about history, some about approach–all of them sensible and interesting. More importantly for me, the questions weren’t all directed at Ms. O’Neal.

I made a mistake. As a teacher I know better than to call upon an eager student. And yet that’s exactly what I did. I fielded a question that I dreaded to hear.

“Why are you getting public money to choreograph these b-boys?”

I heard the choreographer stifle a weary gasp. I looked at her, as if to ask “Wanna take this, or shall I?” Finally, Ms. O’Neal gave a very measured, respectful response that dignifies the question much more than it deserved.

I am more blunt. I wasn’t going to let it rest.

After she finished, I picked up the theme.

“These aren’t just random people off the street. Their work is serious, and always has been. Serious work deserves public support. But let me turn this around a bit.

“Would you even be asking that question if this were a group of European folk dancers?”

It was the audience’s turn now to gasp.

Things went very silent. Breaking the moment, I decided I’d better go on to the next topic.

“I’m sorry. Did I just drop a microphone? Let’s take another question.”

I think Ms. O’Neal wanted to punch me in the ribs. But she couldn’t. There was an audience.

There was a dagger in my rhetorical question. My observation of dance in Seattle, and it appears Portland is the same, is that they pride themselves on their innovation, openness to change, and progressive attitudes. But when it comes down to it, the community tends to view others whom they do not consider legitimate with scorn and condescension.

Anyone doubting the condescension to which these artists are subjected can read reviews of the show such as this:

The only false note in Opposing Forces stems from the occasionally irritating voice tracks of men and women talking about why they’re drawn to hip-hop or their struggles with finding individual identity. Their insights are not particularly profound and their droning on draws attention away from the physical drama that O’Neal and her talented team of collaborators establish throughout the work.

Why not just put it this way?

Just dance and don’t bother me with your psychological problems, niggers.

Now, despite having read that same writer’s reviews of dance pieces by other artists of color with their similar condescension, I’m willing to accept that the author may be a Yahoo rather than a bigot. But the attitude remains intact. No one wants to hear what a bunch of men of color have to say about modern dance. I mean, what do they know?

This is exactly the attitude that came out in the Portland talk. In Seattle, however, I doubt there are many people who even think that it’s a problem. If so, why would we get writers–all of them female, by the way–who toss around phrases describing the Opposing Forces dancers as “ripped from the wild”? Why when people ask Ms. O’Neal about her work is the typical question “How do you handle them?” as if she were a wrangler and they were broncos in need of breaking?

When Margo Lauritzen wrote her hip-hop fantasia review of the show, she opened by saying, “I think I’ve got the address wrong; I don’t know anyone at this party. I look at my invitation, it’s clearly stated that this party is my birthright.”

And indeed many middle-class white female dancers think that the stage is their birthright. Anyone else is an intruder.

I thought back immediately to the anonymous commenter.

One of the reasons I don’t ever feel comfortable talking about modern dance is not that I don’t understand the vocabulary but that I am not a dancer. Despite protestations to the contrary, the modern dance world is exceptionally, and often tediously cliquish. If one does not belong to the clique, then nothing one can say or do will ever matter to the clique and its ringleaders. Entrance into that clique, in Seattle and Portland, requires sacrifices I will not make, and essential differences that I cannot change. I’m not female. I’m sure as hell not white. I’m just a dude, and a straight one at that, and since I have the rest of the known world in which to exercise my cisgendered heterosexual male privilege, why should anyone in dance allow for my voice there?

My lovely middle class white female friends who dance often reassure me that I have a voice and am taken seriously in their circles. Perhaps. But I have never, not once, felt that was true. I have male friends who are dancers, who are not taken seriously, and who are excellent artists. If they’re being blown off, a non-dancer like me hasn’t a chance.

And it occurred to me as I sat there in my hotel room in Portland that I was, essentially, just like that anonymous commenter: an interloper in the realm of modern dance. The difference for me is that I can walk away from it at any time and I’ve lost very little. My identity as an artist, certainly, will remain intact regardless. But my straight white male dancer friends, and my gay black male dancer friends, and my trans dancer friends–their identities are as dancers. They lose everything as their voices are stifled. And they can’t just walk away.