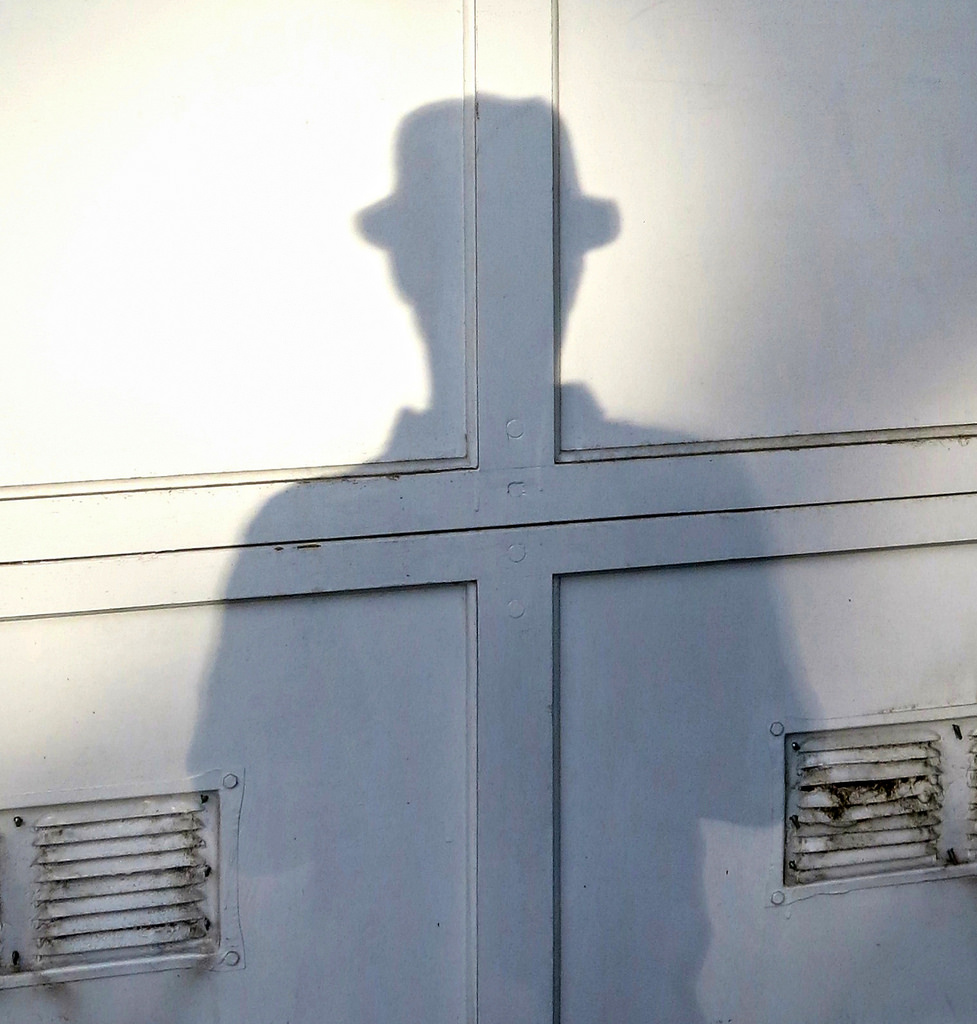 It’s important to keep in mind that any interpretation one might give of a work of art, or indeed anything else, must be conditional and should be stated as such. This picture dates probably from 1941-1944. The paper is likely chlorobromide. The subject seems to be the relationship of three men. And so on. Probability is not certainty, no matter how high the percentage, and one can always be proven wrong if and when data become sufficient.

Let’s take a look at this week’s picture.

Everyone likes to talk about how context matters. But which context?

The whole difficulty of interpreting photographs is their lack of syntax, as William Ivins calls it. Because of this they accept virtually any context just as easily as another. And the “context” changes the interpretation of the picture. But again what context?

Because of the lack of inflection in this picture itself, there’s not much immediately obvious context. So the more description one can provide to extrapolate the better. And if one is attentive, a deep analysis may fill in context where none was originally.

This picture as it sits on my scanner is a 4″ x 6″ black and white print. The verso side of the picture has no writing on it. In fact it has no markings at all, no lab numbers, no paper type, no stains. Nothing.

Yet there are things. The foreground has a large puddle, and what appear to be a large number of tracks made by corrugated tires. The middle ground however seems largely untouched. No tracks, no puddles except the very far left of the picture. The background is where all the action is. There are at least three heavy trucks and one smaller one which has three people visible behind it and possibly the head of a fourth, two people standing to the right of it, and one person behind them climbing a ladder that leans into a mysterious and massive contraption on the back of a truck trailer. Between the two men at the right of the small vehicle and the vehicle itself one can see steam billowing up in the near distance. These two men also wear formal caps. The others do not. Under the magnifying glass, they appear to be dressed in military gear. All of the men are looking the same direction: at the big manufactured, modular thing on the back of the truck, which is also the object in sharp focus in the frame.

The main subject seems to be the relationship of these men to the large contraption on the trailer. It’s important — but what is it? I have no idea. All I know is it’s big and heavy from the way it buckles on the trailer. The trailer truck itself, and the other vehicles appear to be from the 1950s, judging from the still-detached headlights, radiator shapes and grills. From the aspect ratio of the picture, I’d assume it was shot on 35mm, which would suggest that it was done by a photojournalist of some sort in a military setting, possibly the Korean War.

This was a simple interpretation, because I am unfamiliar with many of the things in the picture. My interpretation would have been different if I had more information.

Shortly after I found this picture, I found an identical one, identical in terms of picture matter at least. This picture, however, is 7″ x 9″ and contains more information. Also, the picture has been written on, both on the front and the back.

That there are two pictures leads me to reconsider the first picture. Which one came first? Here it’s almost certainly the 7×9 print and not the 4×6. That means this was probably not taken with a 35mm camera. Which means it was probably not a photojournalist. It was more likely an internal military photographer. The strange ratio of 7×9 could have been 8×10 originally. 8×10 is more common. The photo has definitely been cut. Has it been cropped? I don’t think so. I think this is a 7×9 where the borders have been minimally trimmed. The top has not been cut at all, and given the contents of the picture there seems to be little rationale to have cropped an 8×10 — why not just print it at full size, especially since the paper is more widely available as are 8×10 frames?

If this is a 7×9, that’s a mighty rare camera. And yet…the 7×9 camera was common for military surveillance missions during World War II — for the Germans. The 7×9 Ross was the camera that made Hasselblad famous. And with the embargo against German cameras lifted in the 1960s, American photographers began collecting Rollei and Hassie cameras as the high-end cameras to work with when one didn’t want to drag 25 pounds of view camera equipment around a field. It’s completely plausible that American GIs would have such a camera as the spoils of war, or from their travels. Japanese cameras would have been on the rise with the Yashica and Pentax and Mamiyas of the time, but those cameras are largely square.

How do I know they’re American GIs in uniform? I followed the arrow.

It reads: “The guys standing at the arrow are Col. Paul Hinkley (remember from Cp Carson) & myself. This is the 120 ton transformer for the Korean Electric Co. 15 Feb 64.”

So I revise my interpretation. The trucks are probably still from the 1950s but the picture is from later, if I am to believe the writing. The uniformed men are American GIs, as I suspected, but now I can guess fairly safely that the men without hats are Korean civilians, probably with the electrical company. The middle ground where there are no tracks was probably chosen because it’s quite hard, and will hold the 120 ton transformer without sinking. The soil in the foreground definitely would not, as it can’t even hold the trucks that have driven over it without starting to cave.

The audience for the photograph becomes clearer: instead of the picture being the work of a photojournalist conveying information to a lay public, it is more likely intended as a document of construction, good for the Korean Electric Company and the US Army, and good for the two identified soldiers. The subject is, I think, still the transformer, but now I know what it is and why all the men are looking at it. This is a big deal in a recovering South Korea, and a tribute to good ol’ Army know-how.

What are the odds that I would come across a second picture with such vital information? Quite low, I’d say. Even if I could have looked up the exact model of the trucks and by some endeavor discovered this was a transformer, there are certain things I could never have known exactly. With only the 4×6 in hand, I’d never know the names of the soldiers, or the precise date of the picture. I might figure out certain bits of “context” but much would remain shrouded in mystery. “Historical” context — the time in which the subject matter of the photograph still existed — would have been the same, and yielded the same clues depending on one’s knowledge of the subject matter itself. The biographical context would remain the same for the two soldiers with a slight variation perhaps if one took the point of view of the Korean civilians, but unless one knew these people personally it would remain speculative.

If I had first seen this photograph in a book on the US Army, would I have made certain inferences more quickly than others? Of course I would. Something similar would be the case if I’d first seen it in a magazine article on the rebuilding of Korea, or a newspaper feature on American imperialism, or on a gallery wall. Presentation supplies context, but not an informative one; rather, an interpretive one that leads an audience to make certain leaps of faith rather than others.

Think of how many works of ancient art are just like this. Having come to a person in the 21st Century out of nowhere, how would they appear? What are the odds one can accurately fill in all their missing bits of “context” without access to multiple records of the artist, the artmaking, and the probable audience? Despite the smugness of most postmodern art theorists, a picture is not just a vessel to carry fashionable notions about “culture” — what would that even mean? A picture may have no syntax and therefore readily accept most any nonsense said about it or any context into which it’s placed, but a lack of syntax is not a lack of information. Photographs are richly descriptive. Their skill at description argues for itself.