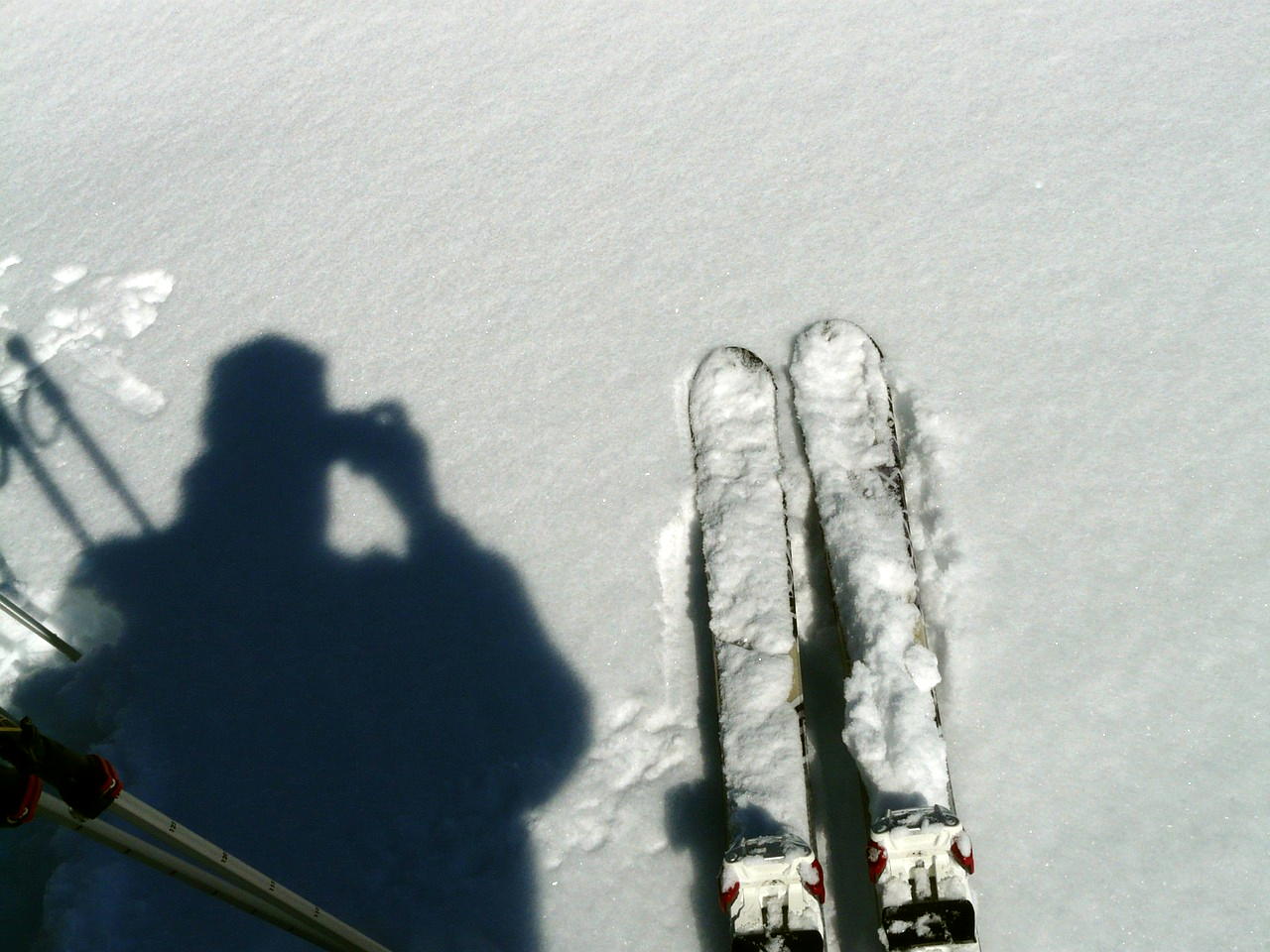 But what, then, is the the relationship of the vernacular to the art?

I am thinking about this as I come to this picture again: A straightforward tourist photograph of an area outside Sedona, Arizona. Or so it’s marked on the verso.

It’s written twice, in fact; once in pencil, once in pen. My guess is that it was written hastily in pencil first, then later in pen to make sure the photographer or user had a permanent notation that wouldn’t be erased accidentally. So the picture may have some personal importance.

The picture as I hold it is quite wide, 7 cm by 11.5 cm. This aspect ratio is much wider than 35mm. Given the pose of the shadow with its arms akimbo, this is likely taken with a waist-level viewfinder and a medium format TLR camera. The camera could be any one of a number of box cameras, possibly a Brownie. The picture size is typical of 116 or 616 roll film which has a history going all the way back to 1899 and was only discontinued in 1984. The last 616 cameras were manufactured in 1948, but this picture could have been shot any time with any of fifty years’ worth of cameras. This makes the picture difficult to date.

Within the picture, the signs offer a little more help. This particular version of the Conoco logo was used from 1930-1970. The Goodyear logo narrows it further to 1942-1968. The Shell logo narrows it even further, as it wasn’t used until 1955. Shell would change their logo again in 1961 and again in 1971. It’s possible but unlikely that even so remote a location as this would be two logos behind the times. This would accord with the other two logos and their lifespans. Therefore this picture is probably taken between 1955 and 1968.

Within the picture frame itself, the print is an untinted monochrome. There is no real background; the sky is completely blown out and the hills are largely middle-ground, with the exception of the buttes on either edge of the frame that are covered in haze and much farther away. The shadows are quite long and angular, suggesting that the sun is low (early morning or late afternoon). The overall focus of the picture is rather soft. The bricks of the foreground fence are not sharp. Neither are the rock strata in the background, or the sage that covers them. The letters on the signs in the foreground are legible but they aren’t sharp either — note the Conoco logo. The picture is slightly tilted relative to the horizon; the slight oblique angle of the rock strata tip one off to the overall slant.

The nominal subject of the picture is, I think, the red rock formation in the middle ground. I say “I think” because it is centered on that oh-so-magical golden ratio line on the right hand of the frame, and its triangular shape stands out against the blank sky. But it’s not sharply focused. Nor does it contain the point of highest contrast. And the physically largest object in the frame is not the hills but rather the signpost and its signs, which are located on the other vertical golden ratio line. Even the mundane motel in the foreground is larger and has more contrast.

It’s been awhile since I’ve been to Sedona, but my memory of these hills is that they are brilliant red-orange in the late afternoon sun, and dotted with dark green sagebrushes that contrast in both shape and color with them. But this picture shows them as bland. Instead it calls attention not to nature but to the man-made: the signs, the fence, the rambler building. The shadow of the photographer here is large and noticeable and itself points to the signpost and signs, re-emphasizing the human presence.

The entire picture can be easily read from these clues as a parable of the human attempt to subdue nature while simultaneously preserving its spectacle, to carve and mold it, to fabricate every relationship with it neatly so that people can have a place with “a view.”

Indeed this is the story of the Southwest United States. Art photographers like Lewis Baltz, Joe Deal, and Robert Adams would pick up this theme throughout the 1970s as part of the New Topographics movement. Remove the shadow of the photographer, and this picture evokes the idea of a human-altered landscape no less crisply than John Schott’s photographs of Route 66 motels, or Henry Wessel’s pictures of Tucson (Wessel may even have left his shadow in the photograph like the amateur photographer here).

Yet this picture predates the New Topographics exhibition. Just as surely the photographer here had no pretense of creating “art photography.”

In his essay for the In Sequence: Photographic Sequences from the Target Collection of American Photography, Leroy Searle wrote that one of the primary lessons of photography is restorative: namely, to teach that “the ordinary is the true topic of all art.” I’ve always thought so myself. Yet art historians refuse to accept this. Consequently, they wind up writing about art history upside down. Obsessed with the Romantic notion of art as an individual force of will that wrests a full-grown creation from the indifferent nothingness of the universe, they concentrate on precious masterpieces and dismiss the rest as derivatives.

Of course this is absurd. In truth, the reverse happens. There were plenty of mundane living spaces built in Florence before Brunelleschi’s Duomo came along, and plenty of Madonna and child icons before Raphael. In any art, first come the myriad creations that are functional, occasional, evidential; only then does a creation come along to receive the dubious honor of being called “art.”

While histories of the seven classical arts routinely ignore this reality, the history of photography cannot. Photography’s largest uses have always been prosaic. While it’s true that there is a short period in photographic history when it was the sole province of chemists and their investors with the occasional moneyed dilletante, by 1853 there were over 3,000,000 daguerreotypes being made every year. I wager very few of them were thought of as “art photography,” whatever that vague term means. I would equally wager that the scientifically minded gentlefolk at the beginnings of photography had no pretenses toward “art,” either.

Photography’s purpose is not to be reified as “art” the way the seven classical arts have been. The silly debates of the late 19th Century about whether or not photography was art or science illuminate this unintentionally. The argument could only start once people accepted a definition of art that excluded the ordinary as a matter of course. Yet the highest art in the Renaissance and Baroque periods was considered to be architecture, an eminently ordinary art recently elevated in stature. The highest arts of other cultures outside of the European patronage model of art tend to be handicrafts and very ordinary indeed. Arthur Symons noted the connection in his book Studies in Seven Arts as he lamented how effete much so-called art had become:

Painting is cultivated as an art, an exotic thing, a toy for rich people; but the arts that must arise, if they arise at all, out of the need of beauty in daily life, the arts of architecture and of handicraft, have either died out of our midst, or survive, like the large and small trinkets of the Arts and Crafts, for a mockery and a warning.

One could easily include photography in this list. Photography is the art par excellence of the ordinary. What other art serves so well and so universally “the need of beauty in daily life”? The billions of ordinary photographs taken every day prove the point. But they scarcely rate a mention in the art history world. The only time vernacular photographs like this are mentioned as “art” is when people decide to put price tags on them at auction and hoodwink people into thinking they’re curators. Yet the artistic language of photography develops from them. It’s time to start rewriting art history the right way around. That history will include vernacular photographs, and not merely to dismiss them. After all, they are the actual background against which so-called art photography takes place.