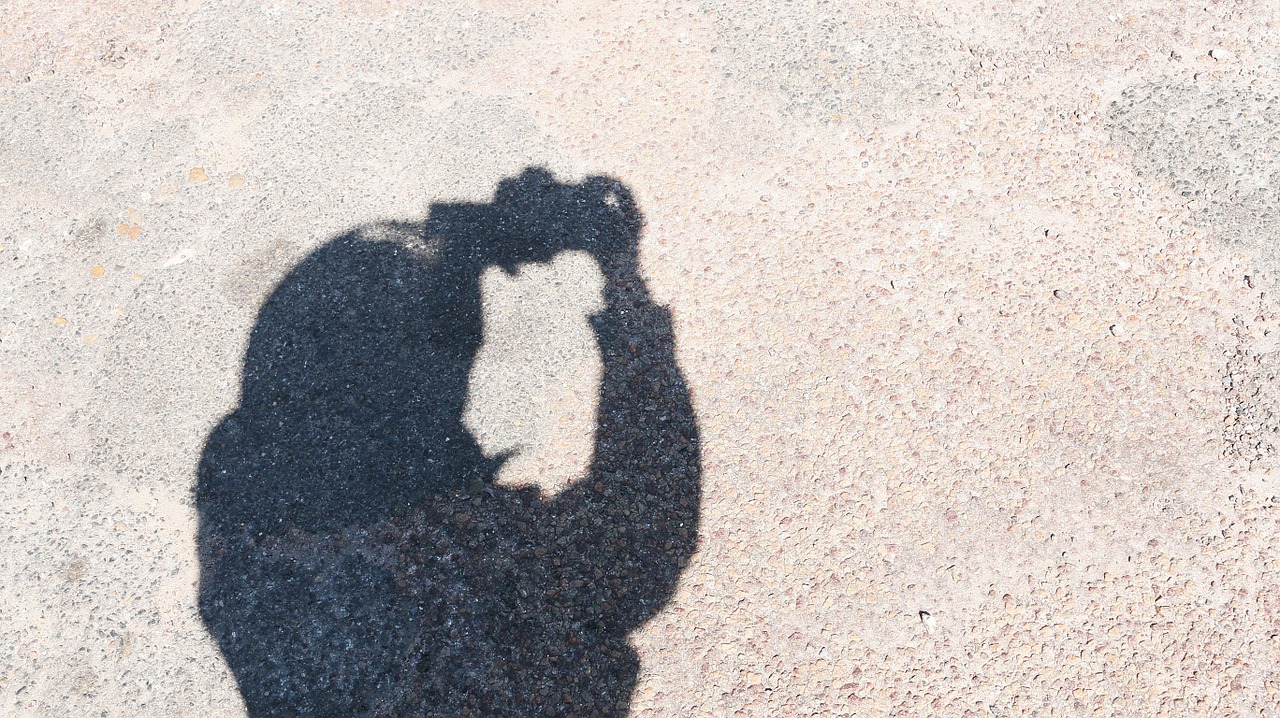 The first thing to notice is that it is small. It’s one of those “wallet-sized” photographs. As this is a square print, the camera was almost certainly medium format. This, then, is likely the size of the negative, too: a 2 1/4” x 2 1/4” print without enlargement.

What else is immediately noticeable?

Within the picture itself, well-lighted trees cover the top 1/3rd of the picture. Tree shadows cover the lower 1/3rd. A bright swath of light forms an oblique line in the middle of the picture that rather neatly breaks the square frame into light and dark. The middle ground alternates between bright illumination and irregular shadows, and serves as a line that draws the eye to the highest point of contrast: the light around the foremost figure.

In the shaded area stand six figures, five apparently female, one apparently male. The five women stand in a conversation circle, all of them looking at each other, none looking toward the camera. The male figure stands detached from the group in roughly three-quarter profile, facing the camera, his body turned away from the women, his right hand in his pants pocket.

The focus is overall sharp, though at the image’s size most things would appear so. The shadows are not plugged. The highlights are not blown out. The film cannot cover the entire contrast ratio from the foreground to the background, so the foreground, which contains the main subject matter of the picture, is too dark but the only way to fix that would be in a lab with an exposure mask. There is a clear line of sight here, no outstanding camera accidents. The image is technically competent.

Because it is small, one would be hard pressed to make out details. The first woman from the left of the frame, nearest the man, has her right arm folded across her chest. Her left arm is not visible. There appears to be a post at the far right of the frame, just at the edge. Not much else is obvious at this size.

I break out my old loupe magnifier to get a closer look at the image.

At this magnification, I can discern that the bright, almost blown-out highlights in the distance form a structure. In the middle ground almost dead center of the frame is an arch above a smaller arch, above two rectangular doors. This same pattern is repeated in the middle ground near the left edge of the frame. This is almost certainly a church.

In that same section of the middle ground, behind the male figure, I can make out a rounded shape that rests upon a darker rounded shape. A short vertical line cuts through the larger shape. I am quite certain this is the back of an automobile. That particular shape to an automobile also helps me locate the time of this picture somewhat. The wheel here is covered by a fender skirt. That puts the car date at 1932 at the earliest. The rounded trunk of the car suggests to me that it is a late 1930s Ford Tudor or perhaps a Cadillac/Pontiac, but I cannot make out the shape of the windows to be certain.

The post at the center of the frame’s extreme right edge is now visible as a stop sign. But an odd one, at least to contemporary readers. It reads: “Stop Arterial Highway” or “arterial STOP highway,” if you prefer. It’s also not red. It’s light-colored. This is also a clue to the date of the picture. Yellow stop signs date between 1924 and 1954. The “arterial highway” writing, with the STOP between two thin black bars narrows this down to somewhere in the 1940s.

The man’s hairstyle, as well as the women’s hairstyles, seem to confirm this. His hair is moppish at the top, and buzzed at the sides and back, a variation of the military brush cut. The woman with her back to the camera wears her hair short and upcurled. This slightly older style probably means she is slightly older than the other women. The rolls and curls of those women’s hair keep the hair up and out of the face (a wartime demand). Indeed the woman second from left is rocking the 1940s “victory roll.” I speculate therefore that this scene is no later than 1947, when the high fashion look would return.

The clothing also dates from this period. Except for the woman with her back to the camera, the women’s dresses are knee-length A-lines with fitted waists — typical of the 1940s. Curiously, they are not printed as many 1940s dresses are. The only decoration I can spot is a corsage on one woman’s dress.

The man wears what appears to be a watch chain, which strikes me as a throwback, as does his hair. The effect is that he looks out of place. Everything in the picture reinforces this: the placement of shadows on his eyes, the spatial separation from the five women in a circle, his gaze being the only one looking at the camera, the way the bright light detaches him even further from the other human figures, etc.

This is probably a simple snapshot by an amateur with a medium format TLR. It depicts a small group of people on a sidewalk across the street from a church, sometime between 1932 and 1954, but most likely between 1941 and 1947. It is possibly a photograph made shortly after church has let out on a Sunday, and the subjects are likely several parishioners of the church, two of whom are husband and wife. The husband seems to be waiting impatiently for his wife to finish talking with the ladies from church. The photographer, who may be related to husband and wife, has caught a moment that emphasizes the separation between the husband and his wife’s circle of friends.

Whoever made this photograph had a lot more knowledge of its historical instant than I ever will. The photographer clearly knew enough that there was no need for a reminder, since nothing is written on the back of the picture. Yet even without knowing the precise personnel or the time or the place from which this moment was wrested, one can easily appreciate this as an image of the distinct difference between an individual and a group.

Even as a small 3″ x 3″ print, this picture achieves that effect clearly. Enlarging it makes the thematic subject even clearer, with the sign echoing the man’s likely thoughts as he waits (“Please stop”) and brings the picture closer to “art” made for public inspection. But this picture was probably never meant to be any larger. It was always meant to be a small token of a memory, kept in someone’s wallet or preserved within the safety of a family photo album.

Art is often a matter of scale.