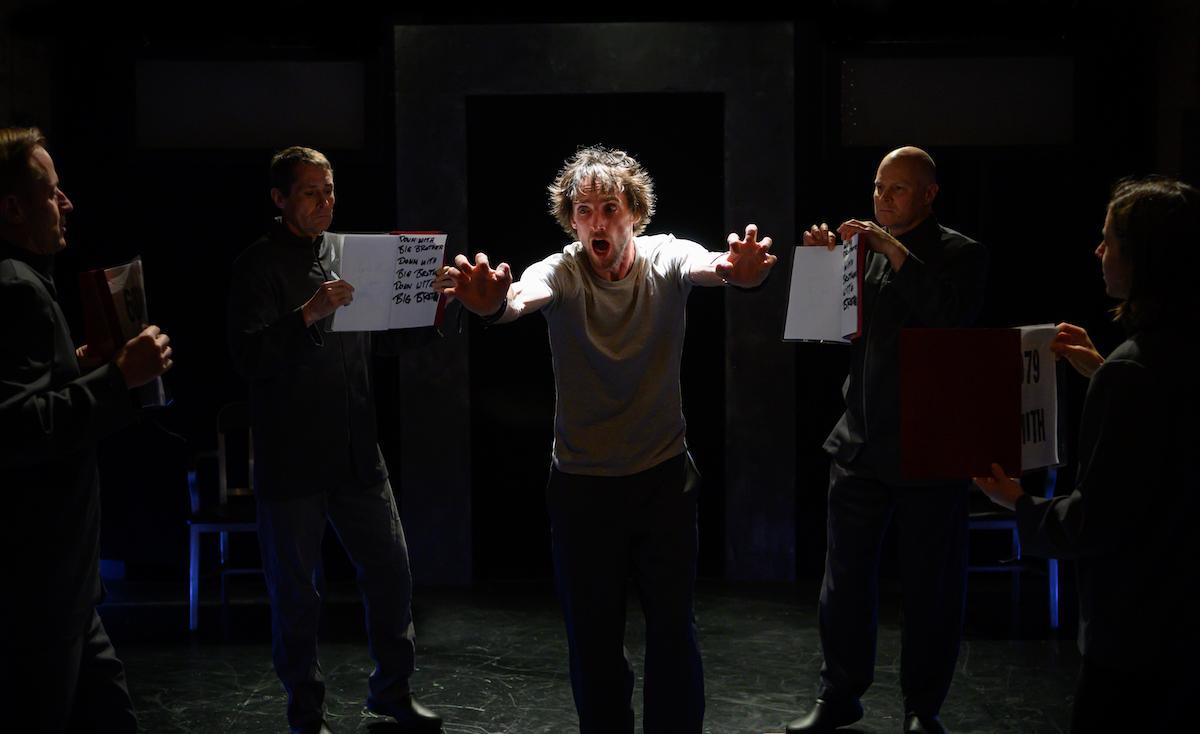 Relevance is the hot topic in theater these days. Students and beginning artists are all being told to ask themselves “Why do this play and why now?” This is supposed to lead to more thoughtful consideration of classic theater’s role in the modern world.

Instead what it usually leads to is pure-D bullshit. I’ve seen director’s notes “explain” that they chose to produce Tennessee Williams plays because they exemplify isolation in technological society, Oscar Wilde plays because they represent an answer to patriarchy, and a dozen completely untenable theses about why Shakespeare can be seen as _____ (fill in the blank with your sophomorism of choice).

This bogus search for “relevance” has distracted theater artists from their real work, which is getting on with it. The real reason for producing this play, right now, with this cast is the same 95 times out of 100: because I felt like it. Tying it together with some academic nonsense about its social relevance sounds all important but it isn’t. Because one wants to is reason enough. No need to rationalize. As an audience member I honestly don’t care why. I only care that the play is meaningful and doesn’t waste my time.

In the lobby at 18th and Union, it was a matter of great discussion how “relevant” Radial Theater Project’s production of 1984 was. I am not convinced. For all of its filtration into the collective unconscious and all the buzzwords and phrases that entered the English language from the novel, 1984 is an artifact.

Orwell wrote the novel after reading Yevgeny Zamyatin’s We, possibly the most influential dystopian novel of all. Both novels are parables of Soviet Russia but at different times. When Zamyatin completed We in 1922, Lenin was still alive and Stalin had only just become General Secretary of the Communist Party in May of that year. By 1948 when Orwell began writing, Russia had transformed into the Soviet Union: from a barely industrial nation to a massive, Baltic to Pacific military power whose armies occupied the eastern half of Europe. Orwell’s novel evokes an world about as thoroughly Stalinist as one can get. It depends upon a Westerner’s perceptions of Communist totalitarianism and its imminent spread around the globe for most of its effects.

But the Soviet Union has been gone for twenty years now. An entire generation of Westerners — and Russians — have no memory of Soviet communism. Stalinism is a mere footnote in history books. The Iron Curtain has rung down and gone to join the choir invisible. And while Communist China remains extant, it has (somehow) lost all reputation as a totalitarian nightmare anything like Orwell’s Oceania.

Yet I’ve heard lots of chitter-chatter about how modern society is so much like 1984. I assure you it isn’t. Certain phenomena are — everyone has a telescreen of some sort these days — but the context for the items is completely different. There are microphones and cameras everywhere but they haven’t been planted. They’ve been chosen. They arouse absolutely zero fear and terror because they are quotidian. There are still prison camps and torture chambers, of course, but they tend to be reserved for minorities and foreigners, and not for your typical bourgeoisie to be enjoyed randomly at the whim of some unseen force. Governments have learned that it is far more efficient to control the populace not through violence but through anesthesia.

The ugliness of contemporary society is just that. There is no oppressive force. Instead, people choose their own ways of yielding their freedom, not to a brutal, violent dictator, but rather to a smiling face and a thumbs up. In that sense, it is far closer to Aldous Huxley’s Brave New World, where people are not controlled by inflicting pain on them but rather by inflicting pleasure.

1984 is not “relevant.” 1984 is a nightmare. And that is exactly what director David Gassner has given us.

Michael Gene Sullivan’s adaptation of the novel gives much more importance to Winston Smith’s dreams than Orwell’s novel. This emphasis allows Mr. Gassner and his crew to dramatize the book in the manner of a horror story — a horror story about the ultimate revolution.

In a letter to Orwell, Aldous Huxley (who was once Orwell’s French teacher at Eton) described the revolution thus:

The first hints of a philosophy of the ultimate revolution — the revolution which lies beyond politics and economics, and which aims at total subversion of the individual’s psychology and physiology — are to be found in the Marquis de Sade, who regarded himself as the continuator, the consummator, of Robespierre and Babeuf. The philosophy of the ruling minority in Nineteen Eighty-Four is a sadism which has been carried to its logical conclusion by going beyond sex and denying it.

That sadism is on full display in the Radial Theater production. Director Gassner has, I think, just about the ideal cast to paint in this shade of black. Ryan Higgins is certainly the best Winston Smith I’ve ever seen. He is incredibly intelligent with his choices of characteristic, particularly his skill at maintaining the Romantic frailty beneath Winston Smith’s rather stiff, indignant idealism. Director Gassner has visually guided the play as a study of individual versus collective, and with such a strong individual at the center, the collective needs to be, and is, equally strong.

K. Brian Neel makes an excellent Shadow Winston — the Winston in fiction, of the past who demonstrates how Mr. Higgins’ Winston-of-the-Present winds up in Room 101. He strips Winston-of-the-Present of both fear and common sense yet retains his feeble idealism and carelessness, which shows deftly why things turn out for Winston-of-the-Present as they do. I last saw Brad Cook as a warden, so it’s no surprise he excels in a similar role here, but also invests it with a kind of ironic silliness that pairs well with Lyam White’s alternately childish, dispassionate, excitable, and cool characterizations.

As the Julia-of-Winston’s-Diary, Marianna de Fazio brings her undeniable beauty and exquisite handling of language to delineate character. Both are important here. As Huxley notes, the revolution of 1984‘s ruling minority is sadism without sex. Julia herself says almost the same thing:

When you make love you’re using up energy; and afterwards you feel happy and don’t give a damn for anything. They can’t bear you to feel like that. They want you to be bursting with energy all the time. All this marching up and down and cheering and waving flags is simply sex gone sour.

Ms. de Fazio here plays both revolutions — the Party’s sadism and Julia’s own sexual revolution — with the intellect and aplomb I’ve come to expect from her. I do, however, wonder whether the director Mr. Gassner encourages her to go far enough.

At one point Winston Smith tells Julia that she is only a rebel from the waist downwards. But as Huxley (and Julia) notes, the very thing this ultimate revolution of the Party has purged is sex — or, more directly, the individual body as anything other than a site of pain. Reclaiming the individual’s own energy for something other than marching, cheering and flag-waving is the beginning of another revolution. To put sexual pleasure back into the revolution is to rebel. Winston is just too dense to understand this.

Yet there’s a kind of antiseptic quality to the way Mr. Gassner handles the sex on stage. It’s all very clean, very formal, with nothing shocking. But surely this is precisely what needs to shock. Allowing the sex a bit more overtly expressive quality would help push the audience closer to the underlying meaning of Orwell’s sadism-without-sex revolution. It could also help show that there are, if you will, cracks in the Party armor that hint at its inherent fallibility.

This is a fairly minor complaint in an otherwise exquisite production. I mention it because I am reaching that point where I think it is no longer possible to return to most of the famous dystopian fictions except by way of the museum. Orwell’s vision of the future as a boot stamping on a human face forever is no less quaint these days than H.G. Wells’ The Shape of Things to Come.

1984 is a fantasy about ultimate power. But as Huxley noted in his letter, “The lust for power can be just as completely satisfied by suggesting people into loving their servitude as by flogging and kicking them into obedience.” In fact, such a method would be more efficient, since it would require no shock troops, no ministries, no tortures. People would choose their own slavery and subjugate their wills to whatever gave them “happiness” or “pleasure” — all of which would be controlled by the Inner Party.

But with the world around us threatening extinction of all things living within thirty years by some reckonings, what fear of even this kind of totalitarian oppression could one have? It might be awful but it would be incredibly short, shorter than the thirty-six years between 1948 and 1984 that Orwell envisioned. The only way to evoke the real horror of such oppressions would be to remind people that saving the world around them might very well lead to the ultimate revolution, and those saviors of our big blue planet would surely be deserving of our subservience.

Now there’s a production of a dystopian future that I want to see. Instead we have productions like Radial Theater Project’s. No matter how brilliant they are, the best they can do show us history and remind us that, in fact, history is always relevant. No director’s notes about relevance necessary. But that is enough — for now.