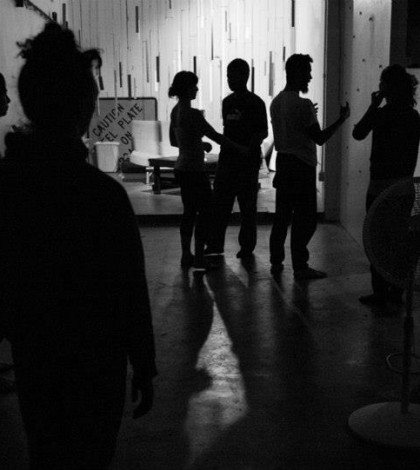 Dance legend Pat Graney comes to Seattle with her latest piece, Orange, This weekend at the Velocity Dance Center. Rounding out the evening, however, are new works from Jody Kuehner, Shannon Stewart, Kaitlin McCarthy & Jenny Peterson, Amelia Reeber, some of whom performed at the recent BOOST festival, if you missed that event.

Speaking of events, tonight the up and coming New Animals are presenting Ego, Dismantled, where five artists from different disciplines join five dancers, under the direction of troupe founder Markeith Wiley, and “evolve from plants, yarn, wood and other things into the human form.” Mr. Wiley and his company have been making an impression over the last couple of years, giving Seattle a couple of physical and heartfelt pieces; while this is intended strictly as an event, there is curiosity to see what it is they’ve come up with now.

While Travel Agency, Pocket Theater’s collaboration with Minion Production, is still the main draw at the Seattle Creative Arts Center, on Saturday Pocket brings Buddy UP! back to the fold. This time members from the Illuminaughty and Biblical Proportions improv troupes combine simply to see what’s going to happen.

You’ve got your Lady Gaga at the Key, but you’ve also got Camper Van Beethoven tonight at Chop Suey. Easily one of the more diverse and influential acts to come out of the post-punk era (the time period, not the genre), tonight they share the stage with roots-rockers Miller and Sasser, and local alt-country act Massy Ferguson.

On the local/global tip, this Saturday you could go down to the Columbia City Theater to see Sean Nelson celebrating two decades of making pop music in Seattle; with New Zealand’s Anthonie Tonnon.

Let’s begin with student theater, as the UW’s Professional Actor’s program presents The Workroom, in which Parisian WWII survivors share their stories of attempting to piece their lives back together in the aftermath. Presented in the intimate Penthouse theater, this is a great opportunity to watch these young actors spread their wings with potentially powerful material.

ACT’s season rolls on with their production of The Price, Arthur Miller’s tale of two estranged brothers who reunite in order to settle their father’s affairs. The rarely produced play, written in Miller’s mid-career period, was a hit on Broadway when it was originally produced in the late 60’sand won many awards save for best play, which went to the a play written by then emerging talent out of England, Tom Stoppard’s Rosencrantz and Gilderstern Are Dead.

Sound Theatre takes over the intimate New City Theater space on 18th and Union with the Northwest premiere of A Small Fire which boasts one of this week’s enviable cast lists: Teri Lazzara, Ray Tagavilla, Gordon Carpenter and Sara Coates. The play, which sounds like a typical Disease of the Week Lifetime movie, is known for its humorous and unusual depiction of its characters.

Meanwhile, Live Girls, fresh off their successful run of Quickies last month, brings us the Spring 2014 edition of their Cupcake Reading Series, a semi-regular showcase of new works by female playwrights at Annex Theatre. If you’re a fan of new theater, staged readings like these give you the opportunity to experience shows while they are still gestating.

SOAP Fest has little to do with personal hygiene, and Bertolt Brecht with music not written by Kurt Weill.