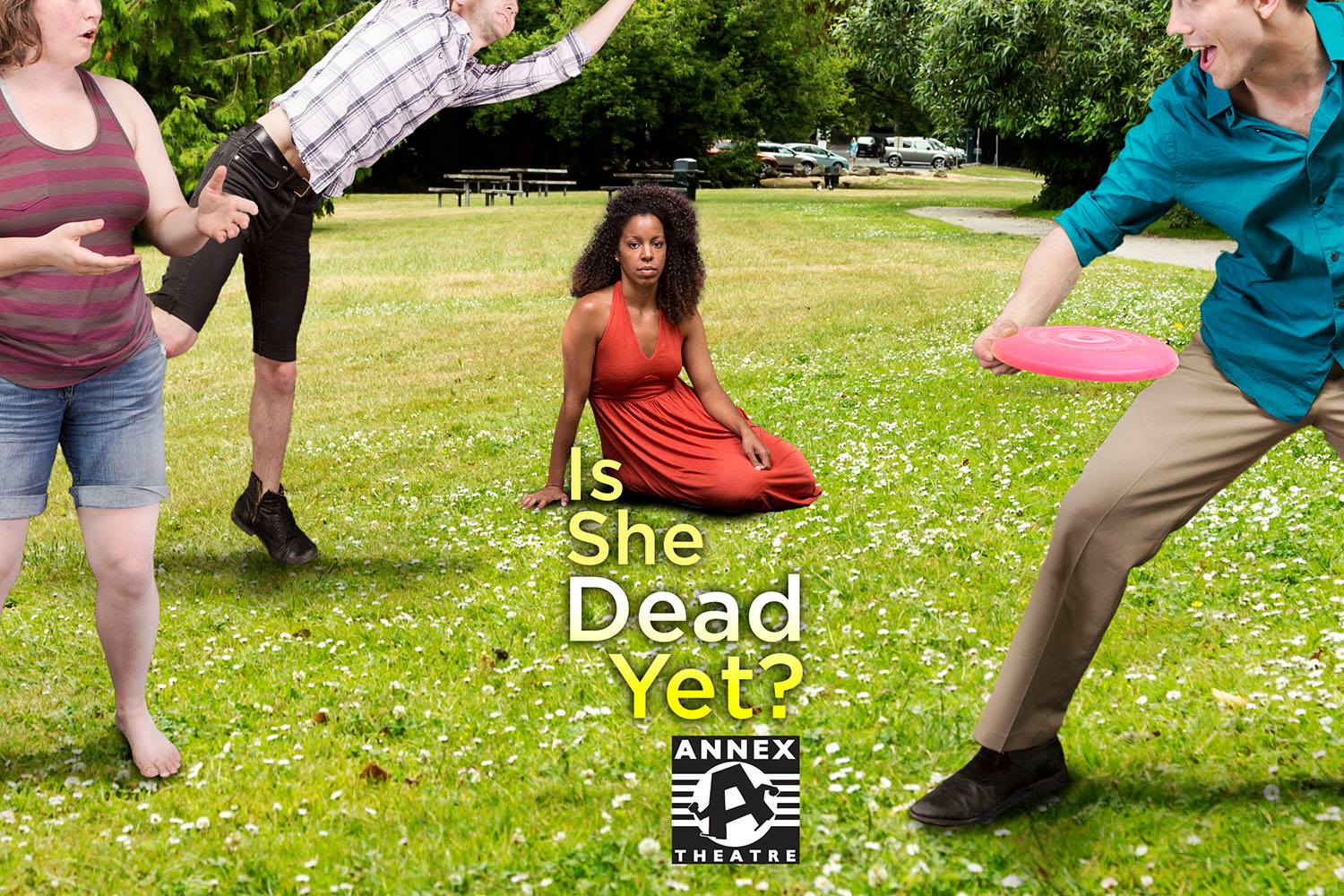 [The following was originally intended to be the introduction to our review of Brandon J Simmons’ Is She Dead Yet?–ed]

There’s a passage in Kenneth Turan’s Free for All where Joe Papp, who produced the original version of Hair, is talking about how he came to produce outdoor Shakespeare in the Park. He states quite explicitly his belief in the function of theater:

Most musical producers are not like Joe Papp. They have very little interest in the social aspect of theater. They just want to do a show because they want to do a show and if it’s completely empty of content and statement–no big deal. After all, it’s made for the “musical theater community” anyway, whoever that is. This problem does not belong exclusively to the realm of musical theater. It recurs time and time again in the allegedly serious Seattle theater, too. The skyline of Seattle theater features many shiny, new, tall constructions that prove to be as phony as a Potemkin village, or something from the set of Blazing Saddles.

It would be politic to try to soften the blow of that statement, but it’s too obvious to deny.

As cathartic as it might be, this is not going to be a diatribe against “just pure entertainment” shows, it’s not the point. It should be said, though, that it is hard to muster any enthusiasm for pure entertainment shows. Sure, they have their fans, and if a given production captures the zeitgeist in the right way, that production will likely tap into a largely finicky audience — giving the producing company the wrong impression that the finicky audience will continue showing up indefinitely if you cater to them. But as a thinking consumer? As an engaged artist? Why spend all of my time on frivolities? Especially when there are frivolities aplenty in the world beyond the world of theater?

Take Book-it’s production of Slaughterhouse Five as an example: solid production; great enthusiastic performances from a typically overstuffed-with-talent-cast, from Ben McFadden, to Jim Gall as Vonnegut, the three Billy Pilgrims and Sydney Tucker in what could have been a fairly thankless role; design elements up the wazoo; but why did the production exist? Was the point to truly present Vonnegut’s themes, stark as they are, or just to “put Vonnegut on the stage?” I cannot speak for the creative team, but based on the evidence of the production itself, things seemed to lean toward the latter. For if the intent was the former, then the war sections would have been more urgent, damning and harrowing. Instead, we get a brief slow motion representation of the war, along with a PTSD sufferer. More of an impact could have been achieved without triggering flashbacks in the audience, a possible reason for holding back. And even then, why? Why get into it? Vonnegut wanted to point out the absurdity of everything. Life, death, war, patriotism, our role in the Great War…everything. The production seemed to exist for the opportunities to say “and so it goes” repeatedly.

The problem isn’t just endemic to the bigger houses, as Theater Schmeater’s recent production of John Patrick Shanley’s Four Dogs and a Bone illustrates. Four superlative, indelible performances from Ray Tagavilla, Brenda Joyner, Paul Custodio and Elinor Gunn; tight direction by Julie Beckman, funny things took place…The script, ostensibly a farce of Hollywood machinations, holds some interest for being Shanley’s spleen venting after his experience in Hollywood with the vastly under-appreciated Joe versus The Volcano. Beyond that? Nothing there that wasn’t readily available in numerous other Hollywood farces from Mamet’s State and Main to Altman’s The Player. Yet another example of the sum being much lesser than the parts because the center is hollow to the point of holding a vacuum.

If these productions and their production companies aren’t looking to engage their audience either intellectually or emotionally, then what are they trying to say? What are they saying that will help us comprehend the world we live in? A world dealing with global warming, racial strife, political chicanery, class wars…Right now some wag is yelling, “nothing! We don’t want to say anything about the world! We don’t want to teach! What’s more, we don’t have to!” To which I join a growing multitude of frustrated theater lovers when I say, “Great, then I don’t want to see your show, nor do I have to.” Have to say that there are people out there, audience members, for whom a pleasant waste of time is just the latter.

Wouldn’t it be preferable, as artists and audience members, to have it be an either/or equation; either an intellectually/emotionally engaging evening, or something that addresses the world? We could even have both, and it could be entertaining. Imagine that world.

Escape? Wish fulfillment? a) Hollywood has essentially cornered the market on these endeavors through movies and TV; b) it’s possible to achieve these while still trying to do something; c) “trying to do something” doesn’t necessarily mean everything has to be issue-driven, it’s just that; d) given the intimacy that theater grants us, it seems a shame to waste it on nothing but drivel.

The same wag from earlier now shouts, “but what about financial survival?” This presumes that audiences will stay away from any of the above endeavors. What they’ll stay away from are poorly assembled productions of the above. Certainly, our culture has not put a premium on artistic integrity or consistency; our culture also has not taught the populace what intellectual rigor looks like; we’re so scared of turning a theoretical audience off, we rarely produce challenging work. However, if you put together a solid and exemplary production, an audience is likelier to come.

Key word there is “likelier,” there are no guarantees; that said, there is a large and untapped audience here in Seattle that is hungering to be catered to with unexpected and challenging work. Evidence of this can be found in the success of the recent Beckett festival; Seattle Theater Works’ imperfect-but-ambitious production of Pirandello’s Six Characters In Search Of An Author; Theater Machine’s take on Maxim Gorky’s Lower Depths — we’re just beginning to scratch the surface here.

Yes, these are all classic texts, which often serves as a go-to solution for many companies; the usual problem here is that no one involved in the decision to stage the classic really thinks about what they want the play to communicate. Instead of deeply deconstructing the text in order to rebuild it, they just update the design elements to modern day Middle East or Compton and assume the results speak to some vague relevance. Please, people, no more half-assed Brecht, no more flaccid Shaw, no more fog-headed Churchill. This goes triple for Shakespeare.

Let’s forget the classics, what about Pony World’s We Are Proud to Present…, MAP’s ambitious-yet-flawed The Feast, theater simple’s lightly absurd Tilt Angel (also ambitious/flawed)…The success these productions had, some more lucrative than others, proves that the audience for this work not only exists, but will show up and support it.

“Isn’t that enough? Aren’t these productions enough” asks Professor Wagstaff. “There’s only so many people attracted to the productions you describe, so what would be the point of providing more?”

To which I reply, “for Pete’s sake, do you really like theater?”

[At this point, the original draft transitions to the review of Is She Dead Yet?–ed]