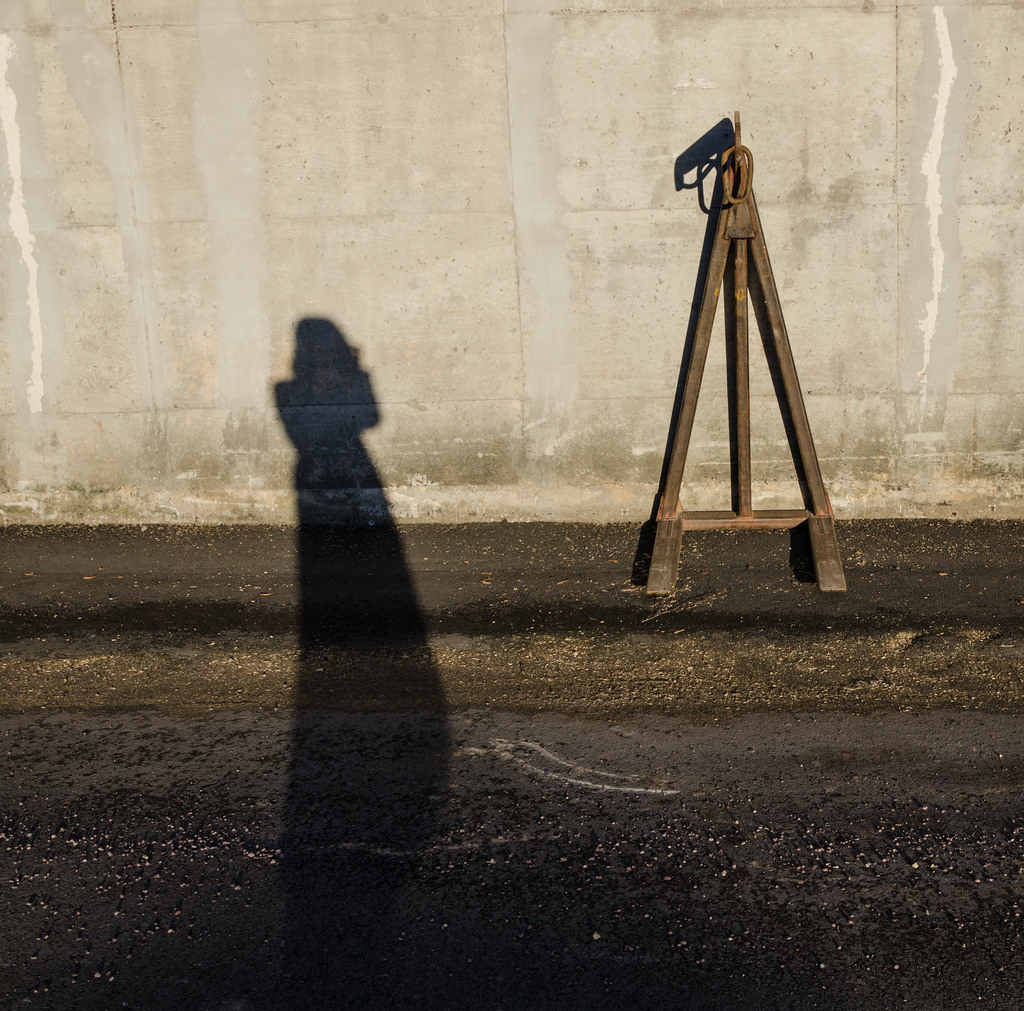 In my last column, I analyzed an anonymous photo from my collection. I didn’t call attention to my process of looking then; I just went about it. But it might have struck many people as not at all typical.

It isn’t. But it should be.

There’s an old bromide that every picture tells a story. The truth, however, is different. As one of my favorite filmmakers Ann Marie Fleming says in her beautiful movie You Take Care Now, “Pictures don’t tell you anything.” What pictures do is describe. Any real analysis of a picture must therefore start with description.

In the pyramid of Bloom’s Taxonomy that teachers use to promote higher-level thinking, remembering is the first level. It is the level of simple knowledge, simple recognition. From remembering one moves up to understanding then to applying then to analysis, evaluation, and creating.

Unfortunately American academic culture emphasizes evaluation — which is to say opinion — above everything else. Students are taught to launch immediately into opinion on a subject and then to defend their opinions in some Sophist fashion. But without actual knowledge of the subject, what is the basis for these opinions?

When I teach students how to write criticism using photographs, my first assignment to them is to write about a photograph. I tell them to write something to their best friend that gives a clear sense of what the photograph is like, knowing they will never see it themselves. Invariably the students launch into opinions about its merits and flaws, trying to match it to some invisible, hypothetical scale of “value.” Probably they think this is what I want. Instead, I surprise them all by asking, “How many of you described your photograph as rectangular or square, or color or black-and-white?”

I’ve not had one student yet raise her hand. Yet if one cannot describe the most basic physical existence of a photograph, how can one then rationally speculate about its supposed meaning and value? Such speculation would be based on virtually no evidence at all, but instead only upon the prejudices of the student to the photograph’s nominal subject matter. Babies are cute to me, therefore this picture pleases me. Pictures of mountains make me think of terrible vacations with my family, therefore this picture displeases me and is bad. The lady in this picture looks mean and I don’t like it. And so on.

None of which says anything at all about the picture itself. This is exactly what Picasso was talking about in the passage I quoted at the beginning of last week’s piece: without actual facts, without any real study of “the form that has some connection with the visible world,” the photograph simply becomes “just an old grab bag for everyone to reach into and pull out what he himself has put in.”

The main function photography serves across the world: to describe. A driver’s license “describes” its bearer. A tourist photo “describes” an exotic locale. A photograph in a newspaper “describes” a newsworthy event.  It is at this level, the level of description, that any sensible interpretation must begin. That way, whatever fanciful path we take, we will have at least mapped the terrain.

On that theme, I present a new picture.

At first this picture might seem to be just a boy in a shack or other wooden room, leaning forward. Upon further reflection it might strike one as an oddity. How is the boy leaning his stiff body at a 60 degree angle without falling?

After a businessman turned off the lights in the store, a man appeared and demanded money. The store owner opened up a cash register, its contents were scooped up, and the man sped away. A police officer was notified immediately.

Upon reading this, virtually every reader assumes that there has been a robbery, where a man has come into a store and stolen the contents of a cash register, then sped off in a getaway car.

But there is zero evidence for this.

In short, the story provides information but it does not provide connections. All the connections are completely inferred by the reader. Is it not just as possible that the actual connection is this?

After the businessman turned off the lights in the store, the store’s owner walked in and said, “Give me the day’s receipts and I will deposit them at the bank.”

The businessman handed the store owner a secure deposit bag and said, “Here they are. All ready to go.”

Then the store owner said, “I need to talk to our accountant about those bad checks we have been stuck with over the last few weeks. Are they still in the cash register?”

The store owner said, “I am having diner at Officer Sally McDaniels’ house this evening and our accountant lives in her neighborhood. If I hurry, I can see the accountant on my way to Sally’s house.”

The store owner opened the cash register and scooped up a stack of bad checks, emptying the register. As he hurried off, the store owner said to the businessman, “Please call Sally for me and tell her that I will be a few minutes late.”

The businessman picked up the phone and immedately dialed Officer McDaniels’ number.

This is what happens when a reader fails to distinguish between fact and inference.

It’s perfectly natural, and expected, that readers will make inferences. But inferences come at a price:

The effects of an inference can create much greater problems. Once a person makes an uncritical inference, that person finds it difficult to accept it might not be true. Furthermore, that person tends to reject different, conflicting inferences, while accepting related inferences as being “the only sensible conclusion.”

Good artists play upon this peculiarity in the human mind in order to create certain effects. Sometimes the effect is as simple as a trompe l’ oeil. Sometimes it provokes a viewer or reader or listener to a complete re-examination of form and idea.

Here the effect is basic, and achieved simply. What the photographer has done is to use the power of vertical lines. Almost all the major lines in this picture are vertical: the floorboards, the table leg, the walls, the wallboards, the planks of the back wall, and all of these are in the foreground. Even the orientation of the frame itself is vertical — portrait instead of landscape. Against this overwhelmingly vertical composition are three strong oblique lines: the two planks across the back window that separates the foreground from background, and the boy himself. Smaller, shorter obliques form from the checkerboard pattern of his shirt, and the shadows made by the hard light coming from the window. There is no color in the picture to distract from the overall composition of dark and light verticals. The top half of the picture is mostly light and the bottom half is mostly dark, further creating the sense of being upright: the sky is bright, and the earth is dark. The foreground with the boy is nearest to the picture plane, and in critical focus, so the viewer’s eye concentrates on this formal arrangement of the picture above all else (since there is almost nothing else). All of these formal elements lead the viewer to infer that this is an unusual picture of a boy seemingly defying gravity.

The assumption — the uncritical inference — toward which the photographer leads the viewer is that the room itself is constructed vertically. The orientation of the picture reinforces this. However, if one looks into the background of the picture, one can see a rod of some sort whose line, if extended across the frame, is perfectly perpendicular to the boy. Behind that rod is what appears to be a wooden fence whose planks are leaning away from the boy, as though falling down. These fence planks however are almost perfectly parallel to the boy, suggesting that they are, in fact, upright.

The final clue is in the background. Though the background is blurry, one can make out a shape that seems to be a tree. The likelihood of a tree growing anything other than vertical is extremely low. Yet this tree seems to be leaning peculiarly — at almost the exact same angle as the boy. If one rotates the picture so that the tree is bolt upright, with its branches radially symmetrical, it looks like this:

Therefore this picture is a trick: the boy is standing upright. It’s the room that’s crooked.

Need more evidence? Look at the boy’s left foot, nearest the camera lens. It’s basically flat to the ground. Also check the folds of his shirt. In the corrected version, they seem to be the normal product of gravity, pointing downward. In the original, for the boy’s shirt, which is loose (not tucked in), to hang at a perfectly smooth diagonal would require some serious starch, if not wire.

The photographer here plays upon the expectations of the viewer that buildings are always built with their floors oriented parallel to the earth. This room is not a normal room. It is likely a specially constructed room. I’m eminently familiar with these, my favorite being an Ames Room, though this is probably a simple tilted room illusion.

The clues to a defensible interpretation of this picture rest on a bedrock of description. If one cannot describe fully the evidence within the frame, and how that description leads to a sense of structure, one will fail to see how the structure of the image is used to trick the eye and the uncritical mind.

To paraphrase Claude Monet, seeing is about forgetting the name of the thing seen. Looking goes even further. It means questioning the premises of your seeing. An alert study of photography will deliver this lesson to viewer time and time again.